Extinction of species in super-greenhouse

Extinction of species in super-greenhouse 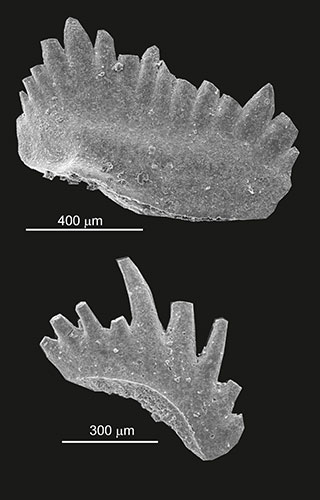 Scanning electron micrograph of a Triassic conodont from rock found in southern China Conodonts are tooth-like micro-fossils that are composed of calcium fluorapatite and belong to the earliest aquatic vertebrates. They died out at the end of the Triassic age. (Image: GeoZentrum Erlangen)

Is a mass extinction of species to be expected when global temperatures rise? At least that was the case 250 million years ago, when a drastic rise in temperatures caused the extinction of 90 percent of all species that had previously populated land and sea. In co-operation with researchers from China and England, Yadong Sun from the China University of Geosciences in Wuhan and Prof. Dr. Michael Joachimski from GeoZentrum Nordbayern at Friedrich-Alexander-Universität Erlangen-Nürnberg (FAU) have found that a lot of time passed until living conditions became more favourable again. ‘However, this development cannot be directly transferred to the present situation,’ cautions Prof. Joachimski.

Powerful volcanic eruptions in Siberia which released inconceivable amounts of lava are believed to have caused the development of a super-greenhouse at the Permian-Triassic border during the transition from the Palaeozoic to the Mesozoic era. Its catastrophic effects on biodiversity are unrivalled in Earth history. No carbon deposits from this time are found in lower latitudes: For several millions of years, no forests grew there. Fish and aquatic reptiles are almost exclusively to be found in the cooler, higher latitudes. In closer proximity to the equator, at a temperature far above 30 degrees Centigrade, the water was simply too hot for them. It was only three to five million years after the mass exodus that the climate started to cool down and new ‘settlers’ conquered the largely deserted areas adapting to different environments and ways of living so that the number of species increased again.

Microscopic teeth of sea animals that were only a few centimetres in length provided the researchers with these insights. Some of the oldest fossils from the oral cavities of eel-like early vertebrates, resemble cones, which is why they were named ‘conodonts’ (conic teeth). They died out 200 million years ago; however, even though it decimated them, they survived the temperature shock at the beginning of the Triassic era. The ratio between the oxygen isotopes 180 and 160 in the preserved tooth-like structures allows for conclusions regarding the temperatures of the oceans these animals inhabited. A method developed at GeoZentrum Nordbayern was used to analyse the isotope ratios in minute samples. In total, 15,000 fossil tooth elements from approx. 2000 kg of carbonate rock were analysed. The results of the study have already been published in the journals ‘Science’ and ‘Geology’.

The Earth’s current ecosystems are believed to be more resilient. The starting temperatures are lower and instead of a single supercontinent there are land masses that have drifted apart. The seas regulate the planet’s heat balance more flexibly and contain organisms that withdraw CO2 from the global carbon cycle. ‘However, our study also shows the catastrophic effects climate warming can have,’ says Prof. Joachimski.