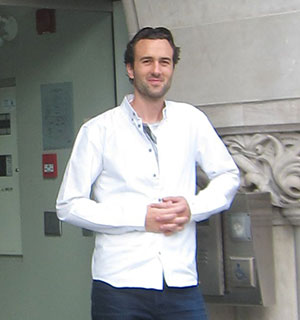 On 9 February – 15 days before the Oscar Academy Awards ceremony – the Scientific and Technical Oscar Awards will be presented in Los Angeles. Among the winners is an alumnus from Friedrich-Alexander-Universität Erlangen-Nürnberg (FAU). The Academy of Motion and Pictures Arts and Sciences (AMPAS) has awarded the ‘Technical Oscar’ to Dr. Nils Thürey and his colleagues Prof. Markus Gross, Prof. Doug James and Theodore Kim for their work on software for simulating special effects which has already been used in over 20 Hollywood films.

The award was Dr. Thürey’s most prized and unexpected Christmas present. Shortly before the holidays, Dr. Thürey was notified by AMPAS that he and his colleagues would be presented with a Technical Achievement Award for their Wavelet Turbulence Software. ‘It was fantastic news and I was able to celebrate with my whole family including my grandmothers,’ says Thürey. Dr. Thürey first devised the scientific concept behind the software which is used to simulate smoke and explosions at FAU, where he graduated in Computer Science at the Faculty of Engineering. During his doctoral degree at the Department of Systems Simulation, Thürey began to research how water can be represented digitally. ‘These simulations are extremely complicated and compute-intensive. Each water particle must be instructed exactly how to behave in specific situations’. Thürey is now using the insights gained from his research at FAU to great success at ScanlineVFX in Vancouver – an achievement recognised by the Scientific and Technical Oscar.

Simulating smoke and water in a controlled environment

The Wavelet Turbulence Software that Thürey and his colleagues developed at ETH Zürich as early as in 2008 accelerates and improves simulations of special effects in films. The software is of utmost importance in film productions as special effects are essential for today’s blockbusters. Real-life special effects with water and explosions – such as blowing up a building – are difficult to control and very expensive. ‘Most importantly, the software allows special effects teams to create several versions of an SFX scenario and control each of the simulated elements which is vital to successful film production – this could not be achieved before,’ says Thürey. Thanks to computer simulations, animators have complete control over the final effect and can also simulate several variations. However, this procedure can take several weeks. Thürey and his colleagues have set a new standard with the Wavelet Turbulence Software. The software is capable of creating several preview simulations rapidly so that animators can choose the best version. This avoids long computing times, as only the chosen version is prepared for production. In just a few years, the software has become extremely popular in Hollywood and has been adopted as a standard application for special effects companies. The software has been used in films such as ‘Monsters vs. Aliens’ and ‘Avatar’. At the moment Thürey is working on two films which are already exciting cinema fans: film sequences from ‘Iron Man 3’ and ‘Superman: Man of Steel’ which are due for release later this year will again be produced by an FAU Alumnus.

Little brother of the Academy Awards