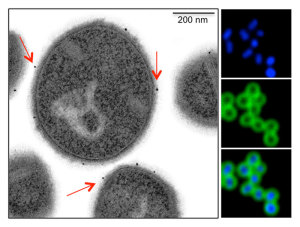 Electron microscope image of the staphylococcus aureus bacteria: the bound gold particles (red arrows) exemplify the reaction to antibodies (left). This test is used to measure the concentration of proteins. Immunofluorescence microscopy shows how antibodies dock onto the surface of bacteria (right). (Image: Dr. Martin Schicht)

Proteins play a significant role in the development of new therapies

Surfactant proteins are an important part of the human immune system for fighting bacterial pathogens. Also, we would not be able to breathe without these proteins. Researchers from the Department of Anatomy II at Friedrich-Alexander-Universität Erlangen-Nürnberg (FAU) have now shown that the proteins also exist in pathogenic bacteria. This result which has recently been published in the journal PLOS ONE, calls into question the results of several previous studies.

The so-called surfactant proteins (the name is derived from ‘surface active agent’) are proteins which fulfil several different functions in the human body. In the lungs, they prevent the pulmonary alveoli from collapsing on exhalation and in tissue such as the nasal mucosa they prevent the tissue from drying out. Moreover,surfactant proteins play an important role in the immune system by docking onto pathogens thus activating a specific immune response to fight pathogenic bacteria systematically.

FAU researchers Prof. Dr. Lars Bräuer and Dr. Martin Schicht and their colleagues have now shown these proteins to exist in two pathogenic types of bacteria, staphylococcus aureus and pseudomonas aeruginosa, which are both germs that can cause severe infections of the lungs and other organs. This finding has considerable consequences: numerous scientific studies using standardised tests to measure the concentration of surfactant proteins in the human body might yield a distorted result. ‘So far, no research has proven whether the proteins found are actually human or bacterial. This means that results of existing research may also show the concentration of bacterial proteins,’ says Bräuer. ‘As a consequence, a very high number of publications may be based on distorted results.’ The finding is even graver in view of the fact that the concentration of surfactant proteins plays an important role in clinical studies and in the development of new therapies, for instance for cystic fibrosis.

At first, research by the group of scientists at the Department of Anatomy II (Chair: Prof. Dr. Friedrich Paulsen), did not even focus on bacterial proteins. In contrast, the scientists were initially concerned with improving the characterisation of human surfactant proteins in different organ systems. For control purposes, Bräuer and his team tested the bacteria for proteins in preliminary studies – and came up with an completely unexpected result. ‘At first, we assumed that there was a contamination and intensified our examinations,’ says Bräuer. In the end, an independent project was launched to investigate and its unexpected result has now been published. ‘Discovering these bacterial proteins is the basis for several further studies,’ Bräuer explains.

The results of Bräuer’s research group have raised more new questions than answering existing ones. ‘We are only at the beginning of researching bacterial proteins,’ says Bräuer. ‘Now, we need to find out whether and how the proteins might be integrated into bacteria.’ Currently, Bräuer and his team are studying a possible horizontal gene transfer – the ability of bacteria to appropriate human proteins.