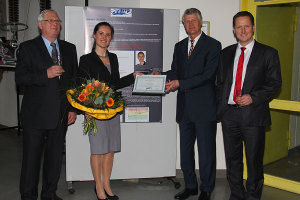 Roughly a third of the equipment in Germany’s medium-voltage power grid has exceeded its life expectancy of approximately 35 years. This increases the risk of power outages. Researchers at Friedrich-Alexander-Universität Erlangen-Nürnberg (FAU) have now developed a database system that can predict the remaining service life and likelihood of the next power outage for different types of power cables. Dr. Ivana Mladenovic, a member of the team led by PD Dr. Christian Weindl, has published the most important results in her doctoral thesis. For this she has now been honoured with the renowned European John Neal Award.

The medium-voltage power grid makes up the backbone of the electrical power supply: it distributes electric energy at voltages between 10 and 36 kilovolts in such a way that it can be converted to the low voltage of 400 or 230 volts required by local end-users. More than half of the medium voltage cables in Germany are ground cables made of oil- and mass-impregnated paper. The other half consists of cross-linked polyethylene (PEX) cables, which have been used since the early 1970s whenever a ground cable needed to be replaced. This means that the remaining mass-impregnated paper cables have long exceeded their expected service life of approximately 35 years.

This leads to an increased risk of power outages — especially when one takes into account that the increase in use of renewable energies changes and increases the power grid’s load. Electricity providers have therefore concentrated on developing maintenance strategies which provide data regarding the state of the grid that is meant to help predict outages. The problem: To this day, not all physical processes that occur during operation have been positively identified and classified. This means that the companies lack significant parameters that allow them to make reliable predictions about the remaining service life.

FAU researchers have designed and realised a system to artificially age cables and a corresponding database system that promise to remedy this: PD Dr. Christian Weindl and Dr. Ivana Mladenovic of the Department of Electrical Energy Systems collected more than 900 GB of data from which they derived critical values for parameters that allowed more accurate predictions of outages. Some of the examined parameters were partial discharge behaviour (smallest energetic discharges within the insulation allowing for the detection of weak spots) or the loss factor (ratio of performance converted into heat within the insulation to required capacitive performance).

In addition to these values, the parameters’ environmental conditions were also analysed more closely. For their project, the two researchers first developed a system for artificial and accelerated ageing of the cables – the Integrated Cable Accelerated Ageing System (ICAAS). In this system, the cables are exposed to a nominal voltage up to three times higher than usual and changing loads and temperatures. In a former truck garage, Mladenovic and Weindl aged several dozen cables – anything from brand-new test cables straight from the factory to old ones from the 1950s. Once a day, an automatic measuring system designed by the two scientists recorded 840 different diagnostics parameters over a period of 2 years – altogether more than 270,000 individual diagnostics measurements. In addition, more than 22,000 measurements were recorded at two-month intervals as part of parameter studies. The purpose of the measurements: Finding measurements that allow for reliable maintenance and asset management strategies and further specifying the critical values of the known parameters.

The two researchers have since gone on to use their ageing database in field examinations. ‘Using the database in the field is a very complicated process. In order to determine the remaining service life, not only do the different parameters have to be taken into account, but also the individual conditions of the location such as temperate fluctuations,’ Weindl explains. Dr. Mladenovic published the results of their research in her doctoral thesis ‘Performance, Reliability & Remaining lifetime estimation of MV PILC cables’. The project was financially supported by N-ERGIE AG from Nuremberg, Imcorp from the USA and Bayka Bayerische Kabelwerke AG.

The European Electrical Insulation Manufacturers (EEIM) annually honours outstanding accomplishment in the field of solid and liquid electrical insulation materials and systems with the John Neal Award. The award is open to students whose work deals with the design, testing, and application of electrical machines or systems. The value of the prize awarded to the winner is 5000 euros.