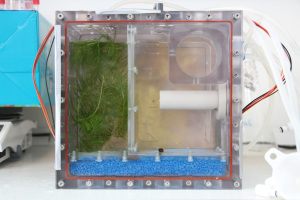 Similar to an aquarium: part of the ecosystem with its inhabitants (Image: FAU/Sebastian M. Strauch)

Its size and weight is similar to a crate of beer but this metal container is packed with sophisticated technology for small plants and animals: researchers at Friedrich-Alexander-Universität Erlangen-Nürnberg (FAU) and the University of Hohenheim are sending an artificial ecosystem into space on 19 April 2013 to discover how cells and organs react to zero gravity. Among other things, the researchers hope to gain insights into the immune system and develop treatments for health problems such as motion sickness.

An unmanned Soyus rocket is scheduled to be launched on April 19 from the international space station in Baikonur, Kazakhstan, carrying a biosatellite and a small experimental container from PD Dr. Michael Lebert’s (Department for Cellular Biology) research group. The container contains an artificial ecosystem named Omegahab B-1 which will be sent into space. The aquarium contains single-cell algae (Euglena gracilis), the aquatic plant hornwort (Ceratophyllum), cichlid larvae (Oreochromis mossambicus), the widespread North American amphipod crustacean Hyalella azteca and some ramshorn snails (Biomphalaria glabrata).

The plants release oxygen which is consumed by the little creatures, in turn releasing carbon dioxide which is used in photosynthesis. The biologists have constructed a filter not unlike that in a home aquarium which uses bacteria to break down excretions from the fish into smaller components. This product serves as a fertiliser for the plants. The snails have an additional task: they keep the tank surface clean so that the fish can be filmed.

This is the first time that such a complex, sealed ecosystem is being sent into space. The experiment does not require any human intervention. At first, it may seem easier for scientists to carry out this experiment on the International Space Station, however this is prohibited by safety regulations: ‘If the aquarium leaks water unexpectedly, it is extremely difficult to collect in zero gravity and water could cause serious damage to on-board electronics,’ explains cell biologist Lebert. 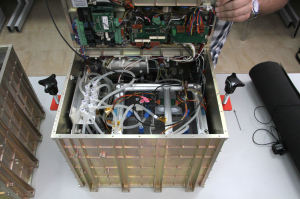 Inside the artificial ecosystem which FAU is helping to send into space (Image: FAU/Sebastian M. Strauch)

Insights into the human immune system

During the 30-day journey several algae samples will be automatically gathered and preserved in their current state in a special solution. This will allow researchers to investigate how the algae change during space travel rather than merely analysing the before and after states. The findings will help researchers to understand how cells behave and adapt in zero gravity – existing experiments have shown that cells adapt to the change in their environment, but not how. Researchers are also hoping to discover why the effectiveness of the human immune system is reduced during space travel.

By pinpointing the reasons for weaker immune defences, the researchers may be able to protect astronauts from this deficiency on longer space missions. The fish will be observed to understand the effect of zero-gravity on internal organs. The findings may be important for developing new medication for motion sickness. Motion sickness is caused by conflicting information transmitted by sensory organs on spatial location and body movement. Fish exhibit similar problems in zero-gravity and serve as a useful model for the investigation.

The launch is part of the Russian Bion satellite programme, which will be continued in April after a thirteen-year break. The Bion programme is designed for automated biological experiments that last up to six weeks. The German researchers’ experiment is in preparation for a more comprehensive space project in 2016.