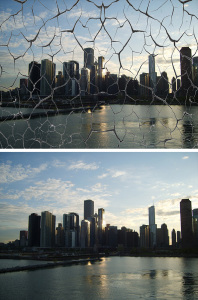 The Chicago skyline – above, an image ‘artificially’ damaged by the Erlangen scientists and below the repaired image. Their method of selective extrapolation can reliably retouch even severe damage in digital images. (Images: Jürgen Seiler)

So far, those who want to retouch digital photographs using image editing software have had to rely on patience and skill. Researchers at Friedrich-Alexander-Universität Erlangen-Nürnberg (FAU) have now developed a programme that automatically repairs flaws in digital photographs and film – flaws that were impossible to fix up until now. The corrected image is almost indistinguishable from the original when viewed with the naked eye.

There are currently different approaches to automatically fixing faulty areas in digital images, but each programme has specific weaknesses. For instance, some methods repair the damaged areas by searching the intact areas of the image for content that matches the flawed sections. These methods frequently work very well, but they fail as soon as no matching content can be found. Other methods extend image borders into the flawed sections. This approach, too, can deliver very good results, but causes problems whenever there are no clear borders or when very irregular structures such as wood grain need to be recreated.

The method of selective extrapolation developed by Dr. Jürgen Seiler and Prof. Dr. André Kaup, Chair of Multimedia Communications and Signal Processing, is free of these weaknesses. Their idea is based on the fact that photographs as well as film footage can be described as layers of certain structural features such as colour edges and light gradients. Using the intact elements of the image, these basic functions are determined and transferred to the areas to be retouched. ‘This results in a high-quality continuation of the image elements. Flaws are no longer visible; the reconstructed image and the original are virtually impossible to tell apart,’ says project leader Jürgen Seiler.

Selective extrapolation may not only be used to repair flawed images, but also to remove undesirable image information: a building site fence in front of a house, a utility pole in the middle of a landscape, or a tower block in the foreground of an Alpine panorama. In order to use the correction method for specific areas in an image, a selection mask must be created in the regular image editing software and imported into the the FAU researchers’ programme. Film footage can be digitally retouched or restored using the same method, which is another reason it is bound to be of great interest for numerous professional applications.