The Green Factory is launched

The Green Factory is launched 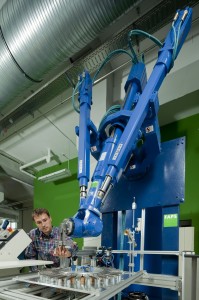 The Green Factory, which promotes energy-efficient and perhaps even energy self-sufficient production, is a long-term goal of the technology association Green Factory Bavaria led by Friedrich-Alexander-Universität Erlangen-Nürnberg (FAU). The research association aims to establish interdisciplinary co-operation across a number of universities in Bavaria to develop the most energy-efficient concepts in production, logistics and administration. The Green Factory was launched officially on 12 April in the presence of high-profile guests from politics and industry, among them the Bavarian Minister for Finance, Dr. Markus Söder.

During the opening event in Nuremberg on 12 April, Dr. Michael Mihatsch presented the official project approval for the Green Factory Bavaria from the Bavarian State Ministry of Sciences, Research and the Arts. The Free State of Bavaria is funding the interdisciplinary research project for energy-efficient production technology as part of a series of measures for energy reform. The Green Factory will receive six million euros in additional research funding for the 2013/2014 budget. The project has secured 12 million euros in funding over four years. Prof. Dr. Jörg Franke, Chair of Manufacturing Automation and Production Systems at FAU, has been appointed as the director of the research association.

During the opening ceremony, Bavaria’s Minster of Finance, Dr. Söder, emphasised Bavaria’s importance to the success of energy reform. ‘Bavaria is ready for innovative energy research. High-tech energy generation is vital to Bavaria as an attractive location for industry. The Green Factory research association will bring expertise and fresh ideas to the energy city of Nuremberg.’

In a series of 28 projects, researchers participating in the Green Factory Bavaria will explore how machines, processes and factories can become more energy-efficient. Researchers in the industrial robots project, for instance, are examining how intelligent routing and control, efficient movement algorithms and drive technologies can be optimised for maximum energy-efficiency. Another project is developing transportation systems which are more flexible and energy-efficient than conveyor systems – a potential solution may be small vehicles capable of independent movement. The best method for connecting electronic components made from copper using a laser beam in the most efficient way is also being investigated by researchers in another project.

Prof. Dr. Karl-Dieter Grüske, President of FAU, sees the Green Factory Bavaria as a logical step in developing energy research at the University: ‘Politics and industry rely on innovative research to drive energy reform forward – and FAU researchers provide this time and again. The Green Factory Bavaria is an important building block in energy research at FAU, dovetailing diverse projects including Energie Campus Nürnberg, the Excellence Cluster Engineering of Advanced Materials and the planned Helmholtz Institute for Renewable Energy Erlangen-Nürnberg. We are also pleased to work closely with our project partners: research challenges as large as energy reform cannot be solved on one’s own.’

Members of the Green Factory in Bavaria next to FAU are the Georg Simon Ohm University of Applied Sciences, the universities of applied sciences in Ansbach, Coburg, Hof, Würzburg/Schweinfurt and Amberg/Weiden, TU Munich and the Fraunhofer Institutes in Augsburg and Bayreuth. The universities combine subjects relating to energy-efficient production, for example mechanical engineering, manufacturing technology, electrical engineering, information engineering and process engineering, materials science and economics in their model Green Factories. Research from the Green Factory will be transferred into practice quickly and effectively through close co-operation with industry.