Hunting neutrinos at the end of the world

Hunting neutrinos at the end of the world 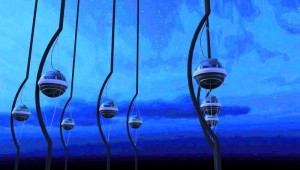 IceCube has very little in common with the things commonly known as telescopes: IceCube consists of more than 5000 spherical sensors suspended from 86 kilometres-long steel cables in the ice. (Illustration: Jamie Yang, IceCube Collaboration)

FAU researchers look for the origins of the universe

What lies behind dark matter, black holes and exploding stars? Where can they be found and how did they form? Together with colleagues from all over the world, Dr. Alexander Kappes, researcher at Friedrich-Alexander-Universität Erlangen-Nürnberg (FAU), wants to get closer to solving the big mysteries of astrophysics – and he intends to find answers in the perpetual ice of Antarctica. Researchers have installed a huge telescope named IceCube at the South Pole in order to track down high-energy neutrinos, cosmic particles that are formed where there are dark matter, black holes or exploding stars. Now their work has produced unique results.

Neutrinos are tiny elementary particles that hurtle through space. They are formed – so goes the theory – in the vicinity of supermassive black holes at the centres of galaxies or as a result of huge stellar explosions. Another source of high-energy neutrinos could be dark matter, formed during the Big Bang that gave birth to the universe. Neutrinos can easily cover large cosmic distances and thus deliver information about the most energy-rich and remote phenomena in the universe. Despite decades of hard work, scientists have previously only been able to observe neutrinos from outside our solar system once during a cosmic event, a 1987 supernova with relatively low energy.

A telescope deep in the ice

The scientists of the IceCube Consortium are also neutrino hunters. While most astronomers direct their telescopes at the sky in order to explore the secrets of space, these researchers go deep underground. They have installed their telescope in the kilometres-thick, very clear ice of the South Pole, at a depth between 1450 and 2450 metres. The appearance of the device is a far cry from anything one would associate with the word ‘telescope’. More than 5000 photosensitive sensors are suspended from eighty-six 2500 metre-long wire ropes. About a cubic kilometre of ice – a thousand times a thousand times a thousand metres – is enclosed in the device the scientists are using to look for traces of neutrinos.

It is due to several special qualities that neutrinos are so interesting to the astrophysicists: on their way to Earth, the neutrinos are diverted neither by magnetic nor by electric fields, meaning that the direction of their movement reveals their source. Furthermore, neutrinos are able to escape even very dense objects such as stars and to thus deliver information about their interior. If these neutrinos reach our planet, they penetrate the Earth almost entirely unhindered, unlike other cosmic particles. This is due to the fact that neutrinos react with other elementary particles only very rarely.

The lack of reactivity of neutrinos also poses a difficult problem for astrophysicists. In order to track down the particles and determine their place of origin, they have to build huge detectors in which at least a few of the arriving neutrinos enter into a reaction. When the neutrinos do react, they leave a trail of bluish light. The photosensors in the neutrino telescope register the light signals and measure them. The researchers then use the data they collected to determine which direction the neutrinos came from and what their energy levels were.

There are currently three huge detectors worldwide looking for the high-energy particles, including the Antares telescope, with which FAU researchers are also working. The researchers at the South Pole have been the most successful so far. About 100,000 neutrinos are observed every year with IceCube alone. The majority of them did not originate in space, however: radiation from space leads to the particles being formed in Earth’s atmosphere. This is why it is so exciting for the scientists when they happen to catch a true cosmic neutrino.

The results the IceCube researchers recently published in the renowned journal Science reflect this. IceCube is the first neutrino telescope to find convincing evidence of the existence of high-energy cosmic neutrinos. According to the researchers’ estimates, about 16 in 28 neutrinos filtered out by the telescope over the course of 2 years originated in space. Two of them were especially energy-rich – approximately thousand times more so than the particles that can be created in the world’s largest particle accelerator, the LHC in Geneva. However, the scientists have not been able to observe a larger number of cosmic neutrinos coming from any particular direction, which would serve as an indicator of individual neutrino sources.

‘We hope that the additional data we are currently analysing will serve as the ultimate confirmation of the flow of neutrinos we found, and of course we also hope that we will find evidence of individual neutrino sources and be able to contribute to solving one of the biggest questions in astrophysics,’ Alexander Kappes says confidently.

The international IceCube team consists of about 280 scientists from 12 countries. From Germany, there is the Helmholtz Centre DESY and nine other institutions: the universities of Bochum, Bonn, Mainz, and Wuppertal, the technical universities of Dortmund and Munich, RTWH Aachen University, Humboldt-Universität in Berlin, and Friedrich-Alexander-Universität Erlangen-Nürnberg. The German contribution of about 20 million euros was financed with funds from the Federal Ministry for Education and Research (BMBF), the Helmholtz Association, the German Research Foundation (DFG), and the budgets of the participating universities.