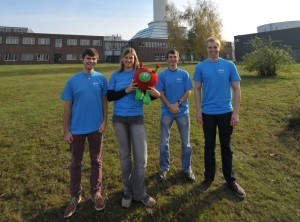 Dropping an experiment to the ground from a height of 120 metres doesn’t sound like a very smart thing to do. But this is what four FAU students have done, again and again – at a laboratory that is the only one of its kind in Europe and with the support of the European Space Agency (ESA).

Benjamin Mockenhaupt, Philipp Neuner, Tobias Netter and Raphaela Prach are this year’s participants in ESA’s ‘Drop your Thesis!’ programme. This means they have the once-in-a-lifetime opportunity to experiment in the drop tower at the Bremen Center of Applied Space Technology and Microgravity for eleven days.

The drop tower is a large laboratory that attracts scientists from all over the world in order to conduct zero-gravity experiments. And this is how it works: the researchers put their experimental set-up into a cylindrical metal capsule. This capsule is then catapulted to a height of 120 metres inside an evacuated chute in the drop tower, before it drops back down to the ground. The capsule is caught in a large tank full of decelerating polystyrene pellets. While it flies up and falls down again, there is almost zero gravity inside the capsule – for about 9.3 seconds.

The students from Erlangen wanted to use these 9.3 seconds to find out how granular materials such as sand, gravel or – in this experiment – amaranth seeds act in zero gravity if they are shaken back and forth very rapidly. The four junior researchers are in their fifth semester of Chemical and Biological Engineering at FAU. The preparation work for their experiment took them approximately one and a half years. ‘We thought of the experiment because we were fascinated by parabolic flights and the possibility of experimenting in zero gravity,’ says Raphaela Prach. ‘In our research we happened to come across a Diplom thesis on granular materials. We developed the idea that we would prove the results the student found in his computer simulation in zero-gravity experiments.’ The drop tower is much better suited for experiments like this, Raphaela points out. They eliminate gravity better than parabolic flights; the weightlessness is even more accurate than at the European Space Station.

The students built the devices they needed for the experiment themselves: flat boxes from antistatic acrylic glass mounted on a board that can be set into vibrating motion with the help of an actuator. The boxes are barely thicker than a millimetre to allow the amaranth seeds to lie next to each other forming only a single layer. The seeds respond to being shaken by aligning in stripes. According to the four FAU students’ initial hypothesis, this is due to Earth’s gravity, which causes friction. Thus, so the students presumed, there should be no stripes in a weightless environment.

However, already on the first day of the drop tower experiments, they faced a big surprise: the stripes became visible more quickly than in normal gravity. ‘We’re assuming that the seeds get wedged together instead of skidding around on the surface, which leads to quicker formation of the stripes,’ Tobias Netter comments on the measurements. The team will evaluate all the data over the course of the next weeks and months and, so they hope, gain even better insights into the phenomena of granular structure formation.