Germany’s energy consumers saved a total of 11.2 billion euros in 2013 because large amounts of renewable energy was fed into the electricity grid. This was recently discovered by researchers at FAU. For their discussion paper entitled ‘Deutschland ohne Erneuerbare Energien? – Stromkosten und Versorgungssicherheit ohne die Einspeisung Erneuerbarer Energien in den Jahren 2011–2013’ (Germany without renewable energy? – Electricity costs and supply security without renewable energy in 2011–2013), the researchers analysed the development of electricity prices over the past few years for Siemens AG as part of the Campus Future Energy Systems (FES) initiative.

Based on historical data from the European Energy Exchange (EEX) the team of researchers led by Prof. Dr. Karl from the Chair of Energy Process Engineering calculated how electricity prices for private households and commercial customers would have developed if, after the Fukushima disaster, no renewable energy sources had been available to produce electricity in the years 2011 to 2013.

The result – which indicates surprising savings – shows that if no electricity had been produced using wind and solar power the increase in electricity prices over the past few years would have been even higher than the increases that actually occurred after the introduction of the German Renewable Energy Act (EEG – Erneuerbare-Energien-Gesetz) and are currently the source of much debate.

This is due to the decrease in energy production capacity from conventional energy sources and nuclear power as a result of the German government’s decision to phase out nuclear power after the Fukushima disaster. Reduced supply on German energy markets would have upset the balance between supply and demand, leading to significantly higher exchange prices. However, the increase in renewable energy and the resulting excess supply on the energy markets actually caused a reduction in prices.

For example, the analysis shows that in 2013 in day-ahead trade – the trade of electricity for the following day – on the European Power Exchange Spot market (EPEX SPOT) electricity prices would have increased by 5.29 cents without wind and solar power due to a considerable reduction in energy supply. The costs of the EEG surcharge of around 20.4 billion euros for the year 2013 therefore contrasts with savings of around 31.6 billion euros for electricity produced using conventional sources. Therefore, based on the historical exchange data, the savings for the end consumer – i.e. the person who ultimately uses the electricity for private or commercial purposes and does not resell it –  amounted to around 11.2 billion euros in Germany in 2013, despite the additional costs as a result of the EEG surcharge. 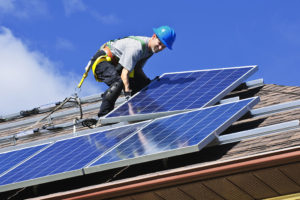 The amount saved by individual consumers varied between groups. For private households and commercial consumers the reconstructed additional costs of 5.29 cents per kilowatt hour are almost equal to the EEG surcharge of 5.277 cents per kilowatt hour for this year – meaning that there would have been little difference for them in comparison with current electricity prices. However, for companies that require large amounts of energy that are currently exempt from the EEG surcharge the proportion of energy procurement costs made up of production costs would have more than doubled.

An even more serious discovery is that without wind and solar power, even with the maximum available amount of conventional and nuclear energy production capacity it would not have been possible to meet demand for more than 269 hours in 2013. This does not automatically mean that there would have been major disruptions such as blackouts in these situations, as the analysis does not take into account reserve services and possible additional electricity imports. However, in these situations it was only possible to guarantee secure network operations by feeding renewable energy into the grid.

In light of this, expanding the supply of renewable energy did not just reduce the overall costs of energy which were reduced for the end consumer, it also increased the security of the electricity supply in the German market in the wake of a reduction of capacity supplied by nuclear power plants and power plants using traditional energy sources.

The discussion paper also shows that – under the condition that no other conventional power plants are taken out of the grid – if renewable energy is increased further as the German government has planned, the cost of electricity for the German end consumer should remain more or less constant until 2020. With the closure of the remaining six nuclear power plants by 2022, the balance between supply and demand will shift so dramatically that electricity prices may increase by up to 7 cents per kilowatt hour in just two years.

The FAU researchers consider it essential that additional production capacity, in particular in the form of technologies that enable peak generation, be available by 2023 at the latest in order to make up for the loss of capacity from nuclear power plants.

In the Campus Future Energy Systems (FES) initiative, Siemens and FAU are working together to develop new concepts for renewable energy use, modern storage technology, compact, energy-efficient drives and low-cost, flexible production procedures. The discussion paper was drawn up in autumn 2014 at a time when there was a great deal of public discussion about constant increases in electricity prices.