Almost half of the German population is overweight and at risk of developing diabetes or joint disorders such as rheumatism and osteoarthritis. With this in mind, a team of researchers led by Prof. Dr. Georg Schett from Universitätsklinikum Erlangen will investigate the harmful combination of metabolic disorders and inflammatory diseases in a new project called METARTHROS. The nationwide project, which is being funded by the Federal Ministry of Education and Research (BMBF) with 4.1 million euros up to mid-2018, aims to investigate what causes and is related to these highly prevalent diseases. Stefan Müller, state secretary at the BMBF, will present the official confirmation of funding to representatives of FAU on Tuesday 12 May.

It is no coincidence that obesity and diabetes often occur at the same time as joint disorders – these problems are in fact closely linked. ‘In recent years we have identified certain cellular similarities between chronic inflammatory diseases like rheumatoid arthritis and metabolic disorders such as obesity and diabetes,’ explains Prof. Dr. Georg Schett, head of the Department of Medicine 3 (Rheumatology and Immunology) at Universitätsklinikum Erlangen and speaker for the METARTHROS project. 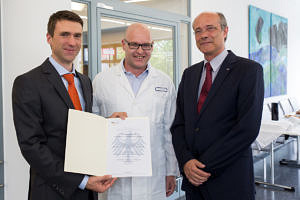 One in two adults in Germany are overweight, a problem which can lead to serious reactions in the body. When fat cells store a disproportionate amount of energy, inflammation occurs more frequently. Fat cells inhibit the effect of the hormone insulin, meaning that blood sugar levels are no longer regulated. This often leads to diabetes as a direct consequence of being overweight. Underlying chronic inflammation amplifies this process and weakens the effect of insulin. Accordingly, there is a close link between diabetes and inflammatory diseases such as arthritis and osteoarthritis.

Researchers hope that if they are able to stop inflammation in the body this will enable them to influence metabolic diseases. ‘For us to treat diabetes and arthritis better and in a more targeted way in the future we need to identify the mechanisms that interact in inflammation and diabetes,’ says Professor Schett.

This is the goal of METARTHROS, which will focus on research into clinically relevant key factors in inflammation and the metabolism that affect one another. The project involves researchers from eight centres in Germany who will investigate the effect of inflammatory diseases such as arthritis on diabetes, as well as the role of diabetes in joint inflammation.

METARTHROS brings together a number of projects which are of great clinical significance and aim to explain the molecular mechanisms, the corresponding biomarkers and the clinical relevance of these processes. It has a strong focus on translational research, the results of which will be put into practice as quickly as possible. The project will collaborate with the German Diabetes Centre (DDZ) in Düsseldorf and the German Rheumatism Research Centre (DRFZ) in Berlin, meaning that there is particularly high potential when it comes to finding new approaches to assessing arthritis and diabetes.