In Nature: New nanostructures for the efficient transfer of solar energy

In Nature: New nanostructures for the efficient transfer of solar energy

Converting solar energy into electricity is becoming ever more important. Technical advances in this area mainly depend on the success of transferring the energy gained from light with the least possible loss of energy. This requires new forms of components. In the journal ‘Nature’, researchers from FAU and the University of Bayreuth report on nanofibres which allow for energy transfer over several micrometres at room temperature for the first time. This is made possible by coherent transfer along the individual nanofibres.

The researchers have created supramolecular nanostructures which can carry light in a straight line over several micrometres at room temperature without losing significant amounts of energy. These nanostructures are constructed from 10,000 identical building blocks. Each building block is similar to the structure of a propeller with three blades: the carbonyl-bridged triarylamine core is bonded to three NIBT chromophores which are raised to the exterior. These disc-shaped building blocks are formed through self-assembling nanofibres that are more than four micrometres long and 0.005 micrometres in diameter (for comparison, a human hair is approximately 50 to 100 micrometres thick). The carbonyl-bridged triarylamine core is essential for transporting energy. It was synthesised by Dr. Milan Kivala’s research group at FAU and modified chemically at the University of Bayreuth. 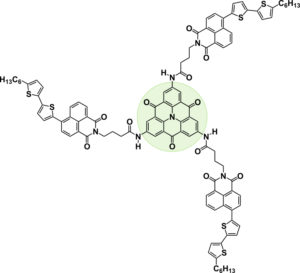 Using a number of microscopy techniques, the researchers were able to see how the energy is transported along the nanofibre. Even at a distance of 4.4 micrometres there is only a minimal loss of energy. If the nanofibres were extended with additional molecular building blocks – again through self-assembly – energy could be transported over larger distances. In transporting energy through the nanofibres, the molecular building blocks work together in a precise form. They transfer the energy at a regular speed from one building block to the next, a phenomenon which is referred to by physicists as quantum coherence.

‘These are very promising nanostructures which make it clear that research into finding a suitable material for transporting energy efficiently is worthwhile,’ says Dr. Richard Hildner, who specialises in the research area ‘Light Harvesting’ at the University of Bayreuth. This involves studying the transport processes in photosynthesis in plants intensively and using these findings for generating energy from sunlight.

‘The supramolecular nanostructures that we have synthesised could help us to better understand the photosynthesis mechanisms in plants or bacteria. Over the coming months, we are going to be looking at how these structures can be used as components for new solar cell architectures and optical components,’ says Hildner.