How FAU is helping refugees

How FAU is helping refugees

Study advice, language courses, language tandems and an opportunity to attend lectures – FAU has a lot on offer

They come from many different countries – Syria, Ethiopia, Ukraine, Albania – but they have one thing in common: they are all taking part in FAU’s programme for refugees and asylum seekers.

Twice a week, future students attend a German language course where they improve their skills. Vocabulary, pronunciation, parts of speech, syntax, non-fiction texts and prose are all part of the syllabus. The participants have been living in Germany for several months and heard about the course from a variety of sources – from volunteers, in other language courses, from flatmates, from supervisors or via the FAU website. After an initial consultation to confirm that they had the required qualifications to study in Germany, they each took a placement test and were then able to enrol in the language course (for more information see our interview with Dr. Brigitte Perlick).

Some of them started with no knowledge of German at all, while others already understood a fair amount.

‘Some of them started with no knowledge of German at all, while others already understood a fair amount. Now they want to learn in a structured and targeted way, and receive individual advice on where to go from here,’ explains Gudrun Brug, who organised the seven courses that are being run in Erlangen and also teaches herself. There are currently another six courses in Nuremberg.

A different form of help 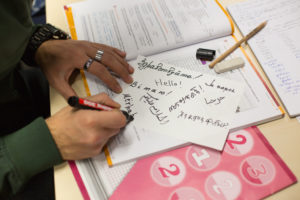 How do you say ‘hello’ in Ukrainian, Arabic or Amharic? Language course participants write the words for the cover of ‘alexander’. (Image: Erich Malter)

Student Jana Köppen provides a different form of help. She and a friend went to a meeting at the end of October where Germans and refugees were paired up for a language tandem. They were partnered with Irina Verbets and Dimitrij Degtyarev from Ukraine. The two students have visited them and their three children several times already. ‘We want to help the children with their homework or bake with them together during the run up to Christmas,’ says Jana Köppen. ‘We hope to make friends that we can speak German with,’ Irina Verbets adds.

Getting an idea of what studying at FAU is like

Anenda and Engjellushe Sejati came to Germany 11 months ago. They knew from the beginning that they needed to learn German. The two sisters from Albania now have such a good command of the language that they are able to attend some lectures at the University to get an idea of what studying here is like. Aneda Sejati is interested in business studies, while her sister is still undecided – perhaps law or social studies. ‘It is a great project and we are really glad that we can take part,’ says Engjellushe Sejati who, like the rest of her family, does not know whether she will be allowed to stay in Germany.

The two women hope that they will soon be able to study ‘properly’. However, before this can become a possibility they need to pass the DSH examination, a German language examination for prospective international students. Nevertheless, Engjellushe Sejati is determined. ‘If you want to, you can achieve anything,’ she says.