In the early morning of December 3 scientists and engineers from nine European countries started the installation of KM3NeT, the largest detector of neutrinos in the Northern Hemisphere. Located in the depths of the Mediterranean Sea, the telescope will study the fundamental properties of neutrinos and map the high-energy cosmic neutrinos emanating from extreme cataclysmic events in the universe. Prof. Dr. Gisela Anton, Prof. Dr. Uli Katz and their team from the Erlangen Center for Astroparticle Physics (ECAP) at FAU contribute to KM3NeT with simulation and physics sensitivity studies and the production of sensor modules, are responsible for the software development.

Neutrinos are the most elusive of elementary particles and their detection requires the instrumentation of enormous volumes.  The KM3NeT neutrino telescope will consist of a network of several hundred vertical detection strings, anchored to the seabed, occupying more than a cubic kilometre volume of seawater. Each string hosts 18 light sensor modules equally spaced along its length. In the darkness of the abyss, the sensor modules register the faint flashes of light that signal the interaction of neutrinos with the seawater surrounding the telescope. 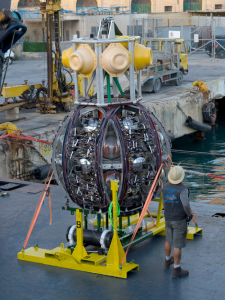 On board the Ambrosius Tide deployment boat, the first string – wound, like a ball of wool, around a spherical frame – arrived at the location of the KM3NeT-Italy site south of Sicily. It was anchored to the seabed at a depth of 3500 m and connected to a junction box, already present on the seafloor, using a remotely operated submersible controlled from the boat. The junction box is connected by a 100 km cable to the shore station located in Portopalo di Capo Passero in the south of Sicily.

Marco Circella, the technical coordinator of KM3NeT explains: “The large depth of sea water shields the telescope from particles created by cosmic rays in the atmosphere above the telescope. Constructing such a large infrastructure at these depths is a tremendous technical challenge. Just making the underwater connections requires custom-designed electrical and fibre optics connectors. The crew of the Ambrosius Tide are experts in performing such delicate submarine operations.”

After verification of the quality of the power and fibre optic connections to the shore station, the go ahead was given to trigger the unfurling of the string to its full 700 m height. During this process, the deployment frame is released from its anchor and floats towards the surface while slowly rotating. In doing so, the string unwinds from the spherical frame, eventually leaving behind a vertical string. The string was then powered on from the shore station and the first data from the sensor modules started streaming to shore.

Prof. Dr. Uli Katz, chair of astroparticle physics at FAU and KM3NeT physics and software director: “It is an overwhelming success that the first string is fully functional and delivers high-quality data immediately after switch-on. Within hours we were able to reconstruct the first down-going atmospheric muons. We are excitedly looking forward to the data from the growing detector.” The Erlangen Center for Astroparticle Physics (ECAP) of FAU contributes to KM3NeT with simulation and physics sensitivity studies and the production of sensor modules, and carries responsibility for the software development.

Rosanna Cocimano who coordinates the high-voltage power network for KM3NeT, remarks: “An electro-optical network of cables distributes the high-voltage power from the shore station to the sensor modules in the deep sea. The light signals measured by the sensor modules are returned over optical fibres back to the shore station.”

The successful acquisition of data from the abyss with the pioneering technology developed by the KM3NeT Collaboration is a major milestone for the project. It represents the culmination of ten years of research and development by the many research institutes comprising the international Collaboration.

Maarten de Jong, spokesperson and director of KM3NeT, said: “This important step in the verification of the design and the technology will allow the KM3NeT Collaboration to proceed with confidence toward the mass production of detection strings and their installation at the sites in the Mediterranean Sea off-shore from Italy and France. A new era in neutrino astronomy has begun.”