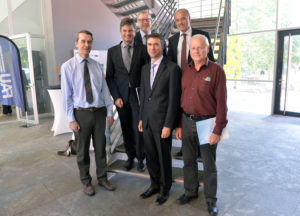 FAU has received 2.5 million euros in funding from the Federal Ministry of Education and Research (BMBF) for five collaborative projects on neutron and X-ray radiation research. The aim of these projects is to strengthen research infrastructure, such as the Heinz Maier-Leibnitz Zentrum in Garching, with the FAU researchers’ expertise. Stefan Müller, parliamentary undersecretary at the BMBF, presented the researchers involved in the projects with the confirmation of funding on Thursday 15 September.

Researchers use neutrons and X-rays to study the structures, dynamics and properties of materials on the atomic level. As well as being important for basic research, these methods also play a role in various applications, such as in the semi-conductor industry. For this work to be carried out, national and international research centres which provide the required infrastructure are essential. The BMBF enables research groups to make innovative contributions to the field at these centres through collaborative projects.

‘We want university research groups to be involved in the continuous development and modernisation of research infrastructures. This applies in particular to outstanding projects such as the ones at Friedrich-Alexander-Universität Erlangen-Nürnberg. Close collaboration with universities is very important for innovation in Germany. This is what makes German research unique,’ explains parliamentary undersecretary Stefan Müller. ‘Funding is awarded to collaborative research projects in a highly competitive procedure. Our researchers’ success is further proof of FAU’s excellence in the field of neutron and X-ray radiation research,’ emphasises FAU President Prof. Dr. Joachim Hornegger.

Work in this area is already a well-established part of the University’s research and involves the faculties of Sciences, Engineering and Medicine. For example, the DFG-funded Center for Nanoanalysis and Electron Microscopy (CENEM) provides a platform for scatter methods to be applied in areas as diverse as pharmaceutical excipient systems, thin films for electronics and nanostructure characterisation. ‘The new funding provided by the BMBF further strengthens this area and will allow FAU researchers to explore new experimental methods,’ says Prof. Dr. Tobias Unruh from the Division of Crystallography and Structural Physics.

Detailed information on the five projects:

Two in one: measuring X-ray and neutron radiation with one device

Two different methods are required to study – and subsequently modify – minute particles, such as those present in medicinal products, in detail on the nanoscale: neutrons, which can be used to analyse organic molecules on particle surfaces, and X-rays, which help determine the size and shape of particles. It is currently only possible to use these two methods separately, which is cost and time intensive. Prof. Dr. Tobias Unruh from FAU’s Division of Crystallography and Structural Physics aims to combine both techniques in one device so that the two methods can be used at the same time, making additional analyses possible.

He and his working group are developing and constructing a unique X-ray option for the D11 instrument of the high-flux reactor (HFR) at the Institut Laue-Langevin (ILL) in Grenoble. The HFR produces the most intense continuous neutron flux in the world and enables the molecular and atomic structure of materials to be studied. ‘This combination of methods will enable us to gain new insights into the relationship between the internal structure and the function of new materials – whether it’s to develop new excipient systems in pharmaceutics, optimise ink to print efficient and low-cost electronic components such as organic solar cells, or produce nanoscale semi-conductor particles,’ Professor Unruh explains.

Nanostructured materials have huge potential. In addition to combining a wide range of electronic, optical and mechanical properties, they often also have entirely different properties to natural materials, making them more efficient. In order to develop mechanically flexible solar cells, light sources and displays, it is necessary to understand the structure of materials on the nanoscale. X-rays can be used to precisely analyse the structure by directing a very fine X-ray over the surface of the film under grazing incidence. During this process the angle between the X-ray and the surface is between just one hundredth and several tenths of a degree. The scattering images that are taken with a 2D X-ray detector behind the sample contain an extremely large amount of information on the very complex internal structure of these films. However, there is currently no software available that can evaluate such images reliably and comprehensively. In this project researchers at FAU’s Division of Crystallography and Structural Physics are expanding existing software to allow the 3D structures of thin films and their formation over time to be reconstructed using measurement data.

Combining X-ray and neutron radiation also has considerable advantages here. The X-ray measurements can largely be carried out using the state-of-the art equipment that Professor Unruh’s working group has in its laboratories in Erlangen. Helmholtz-Zentrum Geesthacht, which is also involved in the project, will provide the horizontal reflectometer REFSANS at FRM II in Garching for the neutron measurements.

Whether for fuel cells, batteries or solar cells, researchers have been using neutron backscattering to study materials for storing or producing energy for 50 years. This method allows the movement of atoms inside solids to be detected. In a two-part project, Prof. Dr. Andreas Magerl from the Division of Biophysics is developing neutron spectroscopy for new applications in areas such as biology and materials science.

One of his aims to is increase the accuracy of the device’s measurements tenfold. To do so he is using a gallium arsenide crystal for neutron backscattering spectroscopy instead of the standard silicon crystal. The challenge here is to make the material in the best possible way. Unlike a silicon crystal, the new material is made of two elements: gallium and arsenic. To produce the crystal these two elements must be made into a homogeneous material without any defects to ensure its function is as good as it can possibly be.

Professor Magerl also aims to make the frequency range that can be evaluated ten times bigger, expanding the technique to allow researchers to study the red section of the light spectrum as well as the blue section for neutron light. To do this Professor Magerl and his partners at the Institut Laue-Langevin in Grenoble and AIRBUS DS GmbH are developing a new chopper system. A chopper consists of four discs that rotate at very high speeds, with the edges reaching speeds of up to 750 metres per second, meaning that they are subject to extreme mechanical loads. These discs are currently made of carbon mats which include fibres arranged at a different angle to the direction of the load so that not all fibres are subject to the same loads. In the new design the fibres are wrapped radially, meaning that they are all subject to the same loads. This in turn enables the discs to withstand considerably higher loads.

Prof. Dr. Rainer Fink’s working group has been operating the X-ray microspectroscope PolLux at the Swiss Light Source in collaboration with the Paul Scherrer Institute since 2008. The researchers’ focus X-rays so tightly through special lenses that the resolution of the images produced of the objects examined is ten times higher compared to standard light microscopy.

The lenses used are known as Fresnel zone plates, which are made of ring-shaped metal structures and enable X-rays to be bent to focus on a tiny point (similarly to how a burning lens is used). Using these lenses not only enables the shape and texture of the objects to be depicted, but X-ray spectroscopy also allows elements to be analysed and electronic properties to be identified. Researchers can use this data to draw conclusions about the material properties and see how structural and chemical properties are linked, such as in components in molecular electronics, polymer mixtures and medicinal products.

Professor Fink and his team now aim to improve X-ray lenses even further to bring the resolution up to the maximum that is currently technically possible – resolutions under 10 nanometres, which is roughly equivalent to 1/6000 of the diameter of a human hair. By combining extremely high-resolution microscopic imaging with a spectroscopic probe, the chemical status can be identified on the smallest length scales, which is not usually possible with other probes used in materials research.

Particle accelerators are essential for basic research and are used in fields ranging from elementary particle physics to nuclear physics and biophysics. Particles are used to create radiation, including X-ray radiation, or as probes to examine samples.

Particle accelerators such as the one at Deutsches Elektronen-Synchrotron DESY in Hamburg currently require a distance of several kilometres to accelerate electrons to the required speed. As a result, the technology is not widely available to researchers – to use large facilities, they have to apply for slots and are only given a limited amount of time to conduct their experiments.

A new technological development could shrink particle accelerators down so that they would fit on a tabletop: researchers from FAU’s Division of Laser Physics and their colleagues at Stanford University have shown that electrons can be accelerated with laser beams – and that this can be up to 100 times faster than in standard particle accelerators.

The researchers use transparent glass elements to create laser beams with the right shape to accelerate electrons continuously and efficiently. The glass elements have ridges on the inside which means that the electrons are slowed down less.

In the new project Professor Hommelhoff and his colleagues at Technische Universität Darmstadt will develop the technology further. First the researchers in Darmstadt will use computer simulations to determine the optimal structure for the glass components to create the best possible environment for accelerating particles. Researchers at FAU’s Division of Laser Physics will then conduct experiments to test how the structures actually function. In the future this approach could also be used to develop new devices and methods of treatment in radiology, another area where particle accelerators are used.