From Daqing to Erlangen

From Daqing to Erlangen

Muchao Qu came to Germany in 2010 to study the language of German in Stuttgart for one year. Afterwards, he commenced a Master´s degree in Chemistry at the Technische Universität Chemnitz (Technical University of Chemnitz) which he finished in 2014. Since 2015, he is pursuing his PhD at FAU´s Institute of Polymer Materials (LSP) where he carries out research on Conductive Polymer Composites (CPC). In 2016, he and some friends set up a scientific research association, mainly to encourage and establish exchange between Chinese PhD students, post docs, guest researchers and professors at FAU. Of course, newly arrived Chinese students and researchers are welcome to join the association as well. The association aims to enable members to share their experiences and collect ideas within the various research areas. By now, the association has attracted 98 members.

Mr. Qu, where in China are you from?

My hometown is Daqing. It´s a city in the northeast of China, close to Russia and Mongolia, with two million inhabitants. This is considered a small town in China. Daqing is home to the largest oil field in the country as well as the biggest national nature reserve for red-crowned cranes . Hence, with its countless pumpjacks on the one hand, and over 100 lakes on the other hand, it perfectly combines industry and a natural environment. Its latitude and climate are very similar to Germany, which might be the reason why I got used to life in Germany so quickly.

What is your PhD project about? 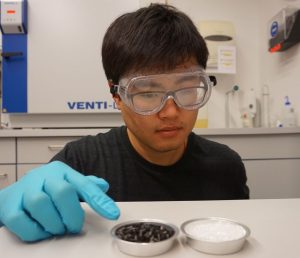 It is about Conductive Polymer Composites. Using fillers like carbon fibres, carbon black and carbon nanotubes, we can produce conductive composites material which will have certain properties regarding flexibility or resistance among others. The results can be applied to heaters, sensor design or 3D printing, for example.

Why have you decided to do your PhD at FAU?

I did my Bachelor in polymer materials at the Harbin Institute of Technology in China and my Master of Chemistry at the Technische Universität Chemnitz in Germany. So when I decided to do my PhD in Germany, I looked at a lot of institutions which cover both research areas. When I found FAU´s Institute of Polymer Materials I was very impressed by its unbelievably broad range of research: breast implants, ping pong balls, artificial heart muscles, human corneal cells, CPCs and much more. Furthermore, it holds many patents and publishes quite a lot of papers. For this reason I assumed that this institute must have a well-equipped laboratory and that the professor must be very energetic and talented. I have always been dreaming of doing research in such an inspiring atmosphere and FAU made my dream come true.

What do you think about research in your area at FAU?

The research on rheology at LSP has a very high reputation worldwide. Rheology is the study of the flow of matter, primarily in a liquid state, but also as ‘soft solids’ or solids under conditions in which they respond with plastic flow rather than deforming elastically in response to an applied force. Professor Dr. rer. nat. habil. Dirk W. Schubert, Head of the LSP, has worked out important discoveries in the field of fundamental research which are acknowledged by international researchers. Furthermore, the topics at the institute are so diverse that researchers can easily share their ideas and find inspiration. The outstanding quality of the research conducted at LSP is proved by the quality and quantity of papers published by the institute and the patents it holds and the collaborations with other institutions around the globe.  Besides, the people at LSP are always willing to help, whether it´s about operating instruments, arranging experiments or mathematical investigations. Plus, we even have a coffee machine and a snack shop here!

What do you like the most in the metropolitan region of Nürnberg and about Erlangen?

I really like the coexistence of the bustling city and tranquil life. I enjoyed the Christmas market in Nuremberg and the Bergfest in Erlangen, but I also enjoy a quiet walk along the Wöhrder See in the middle of Nuremberg. In this region, I can do research without being disturbed by any tourists and I can walk home alone late without having to worry about any safety issues. As far as I have experienced Germany, it is difficult to find another region that contains that much history, humanities, education and technologies all in one place. You can find anything you like in this region and you can be anyone you would like to be.

Is there an aspect of German culture that astonished or puzzled you at the beginning of your stay?

To be honest, there were quite a lot. For example waste separation: Germany has a very complex system of sorting different types of garbage. At the very beginning of my stay, I once was standing in front of several bins in a daze for some time until someone was so kind as to explain to me what kind of waste has to go into which bin. When I got my first own German flat, the former tenant left a huge wardrobe behind which I used, of course. But when I moved out I was told that I had to get rid of it. So I broke it into pieces, rented a car and asked for an appointment at the local recycling depot to have it thrown away. We have such rules in China as well, but people there don´t take waste separation as serious as the Germans do.

Appointments in general seem to be a very German thing. I am slowly getting used to having to make an appointment for almost everything but at the beginning it drove me crazy when I needed appointments for seeing a doctor, having my hair cut or even throwing away garbage. By now, I really appreciate this habit because it gives others the chance to prepare for a certain situation. I even introduced this to my Chinese family! What I still don´t understand is why I need an appointment for setting up a bank account. I experienced the following situation several times in different banks: I am standing in front of the staff, almost begging “Please, take my money” and they will proudly shake their heads, asking: “Do you have an appointment? (Haben Sie einen Termin?)”

Another thing that puzzled me and still puzzles me are the opening times of German shops and this rule that you have to be quiet after 10 pm – it´s called “Nachtruhe”. In China, nightlife usually begins at 8 pm, every day. You can stay at home but there are also many places and activities you can chose from if you want to go out. Traffic is still running, the neon lights are on for the whole night, karaoke bars, restaurants and bathhouses, for example, are also open. On Sundays, the number of customers on shopping streets will even be bigger than on other days. Germany, however, is different in this respect. When I passed the final exam during my Master studies, all I wanted was to sing and dance and celebrate my success but then I was told: “Sorry, it´s 10pm. You must keep quiet now.” Well, never mind. I also remember having a morning walk outside on December 26 and the streets were empty – no cars, no trams, no people. That was a bit spooky. December 26 is a public holiday in Germany, so shops are closed and the Germans spend the day with their families or friends. For this reason, whenever I have friends from China or Singapore visiting me, I always have to assure them that Germany is a developed country although shops close early and people have to keep quiet from 10pm onwards.

Furthermore, German and Chinese attitude towards sunlight and tanning is totally different. While Germans, especially the women, almost compete against each other to be the most intensely tanned, Chinese girls have umbrellas to protect themselves from the sunlight as they prefer to keep their skin as light as possible. In China, tanned skin might be associated with manual labor and a lower status within society.

There is one last thing I would like to mention: Germans don´t drink hot water. In China, however, drinking hot water is considered as some kind of magic medicine which helps to cure all sorts of maladies. Most people inherit this habit from their parents.  A friend of mine once told me her story about drinking hot water in Northern Germany, when she was an exchange student. One day she didn´t feel well. It was late in the night, so she quietly asked her guest mother if she could get some hot water. The guest mother was really kind and asked again and again and again, and finally she understood: the girl really wanted pure hot water without anything. Only when my friend got the hot water and started to drink slowly, the guest mother was convinced that this was not a joke. Then she carefully asked my friend if she could wait a little bit, so that her children could see this. My poor friend could not speak German quite well then and she did not understand at all what was happening. Ten minutes later, the kids were called up and then sat at the table, watching a Chinese girl slowly drinking hot water. They even applauded my friend when she had finished drinking.

Well, in any country there are such peculiarities. And people don’t know why they do these things but just repeat them from generation to generation. However, these traditions make our world interesting and colourful.

Do you have a special advice for Chinese PhD students who are thinking about doing their PhD in Germany or at FAU?

Germany is a very good place for living and doing research. Many people speak English, there is high respect for knowledge and sciences and foreigners are welcome. The country has a rich culture and history, beautiful landscapes and a highly effective transportation system. This is the heart of Europe and you shouldn´t miss it. To those who are considering doing their PhD at FAU I would say the following: Go for it. I know you might be considering other universities, those with a longer history or those which are located in a smaller town, where the cost of living might be lower than in Erlangen. Nevertheless, FAU is an excellent university with outstanding research opportunities, high quality of teaching and with international companies such as Siemens, Adidas, Schaeffler or Audi just around the corner. I am glad that I chose to do my PhD here and I can highly recommend it to others.

Thank you very much for the interview, Mr. Qu.

Further information about FAU´s Institute of Polymer Materials are available on its homepage. If you would like to get in touch with the association for Chinese PhD students at FAU, feel free to write an e-mail to: FAU.CNPhD@gmail.com