The aim of T cell receptor therapy is to enable the immune system to fight cancer in a targeted manner.

The first clinical trial in Germany of a new approach in cancer immune therapy is now under way at the Department of Medicine 5 – Haematology and Oncology at Universitätsklinikum Erlangen. The new T cell receptor therapy can provide vital support to the immune system in the fight against certain types of leukaemia and lymphoma. The first patient is now receiving this cellular immune therapy as part of a phase I/II clinical trial. The patient was diagnosed with a multiple myeloma, which is a malignant disease that affects bone marrow and can destroy bones, five years ago. Since receiving the diagnosis, the patient has received several doses of chemotherapy and an autologous stem cell transplant that involved reintroducing stem cells previously removed from his body. 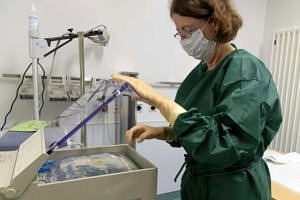 The frozen T cell preparation is defrosted and administered to the patient in an infusion. (Image: Michael Rabenstein/Universitätsklinikum Erlangen)

A stem cell transplant is often the last resort for patients with leukaemia or cancers of the lymphatic system. Cancer patients receive a ‘new’ immune system with the stem cells of a healthy donor. However, stem cell donation is both an opportunity and a risk. Whilst it can heal the patient, it can also cause life-threatening side effects, since there is a risk of GvHD (graft versus host disease) occurring where donated immune cells attack healthy tissue cells in the cancer patient. GvHD affects almost half of the cancer patients who receive allogeneic stem cell transplants from donors. ‘This is why we are researching into alternative approaches in cancer therapy, and T cell receptor therapy is one of them’, says Prof. Mackensen. In conjunction with Medigene AG, scientists at the university hospitals in Regensburg, Erlangen and Würzburg are now researching whether certain white blood cells (T cells) from leukaemia and lymphoma patients can be altered in such a way that they can kill off cancer cells. ‘This is a different and innovative approach. We want to spur on the patients’ own immune system to fight the cancer’, says Andreas Mackensen. ‘We believe this is more gentle and carries less risk than transplanting bone marrow or blood stem cells from another person’.

Until now, stem cell transplants and chemotherapy have been the most important methods for treating leukaemia. A completely new approach is now being tested with the T cell receptor therapy. By identifying certain proteins (antigens) on the surface of cancer cells, T cells can kill off abnormal cells. However, cancer patients either have no or only very few T cells with the special T cell receptors that detect these proteins. For this reason, the researchers have equipped the T cells of the patient in the study with a very specific receptor. With the aid of this receptor, the T cells then destroy cancer cells that the patient’s own immune system would otherwise not have recognised.

Firstly, the T cells from the cancer patient’s blood are isolated and then equipped in a cell culture method with a receptor that detects the ‘PRAME’ antigen on the cancer cells. The prepared and ‘charged’ immune defence cells are then returned to the patient in an infusion. The modified T cells should only destroy cancer cells with the PRAME antigen and leave healthy tissue unscathed. ‘This is the decisive difference between this treatment and allogeneic stem cell transplants’, explains Professor Mackensen. ‘During stem cell transplants, the T cells of the donor may not only attack the cancer, but also the recipient’s healthy tissue, which has life-threatening consequences. We want to avoid this by giving the T cells a very clear ‘description’ so to speak of the cells they should attack. The T cells should thus attack the cancer in a targeted manner.’

Patients with acute myeloid leukaemia, myelodysplastic syndromes and multiple myeloma for whom chemotherapy is no longer effective or who have suffered a relapse are being included in the new study. Patients must also fulfil further criteria to participate in the study.