How literature deals with the end

The end of life or the end of the world is a topic which preoccupies many people. One way to face up to these topics is literature.

By Ilona Hörath, translated by the FAU Language Service

When it’s all over. When death approaches, words fail us, we feel helpless, empty, all our previous convictions and habitual reactions seem to vanish into thin air. ‘This is where literature steps in, giving us stories to reflect on. When we are in danger of facing an abyss, literature gives us a wealth of words, inviting us to think more deeply,’ says Prof. Antje Kley from the Chair of American Studies. She reaches out for the novel ‘Lincoln in the Bardo’ by the US American author George Saunders, who won the prestigious Man Booker Prize for the novel in 2017. ‘The text helps the reader understand what it means to die, whilst its grotesquely distorted images give a decidedly light-hearted touch. At another level, Saunders’ experimental approach to death brings together individual, social and political history.’ According to Prof. Kley, ‘under the sign of death, scope is created for life.’

Since April 2017, Prof. Kley has been working on a research project investigating the representation of an unknown and threatening future – basically, the end of life – in contemporary US American literature. The very title she has chosen – ‘Death becomes us’ – is provocative. Her research focuses on nothing less than the essential question of how what we call ‘life’ can and indeed must be re-evaluated in view of death. 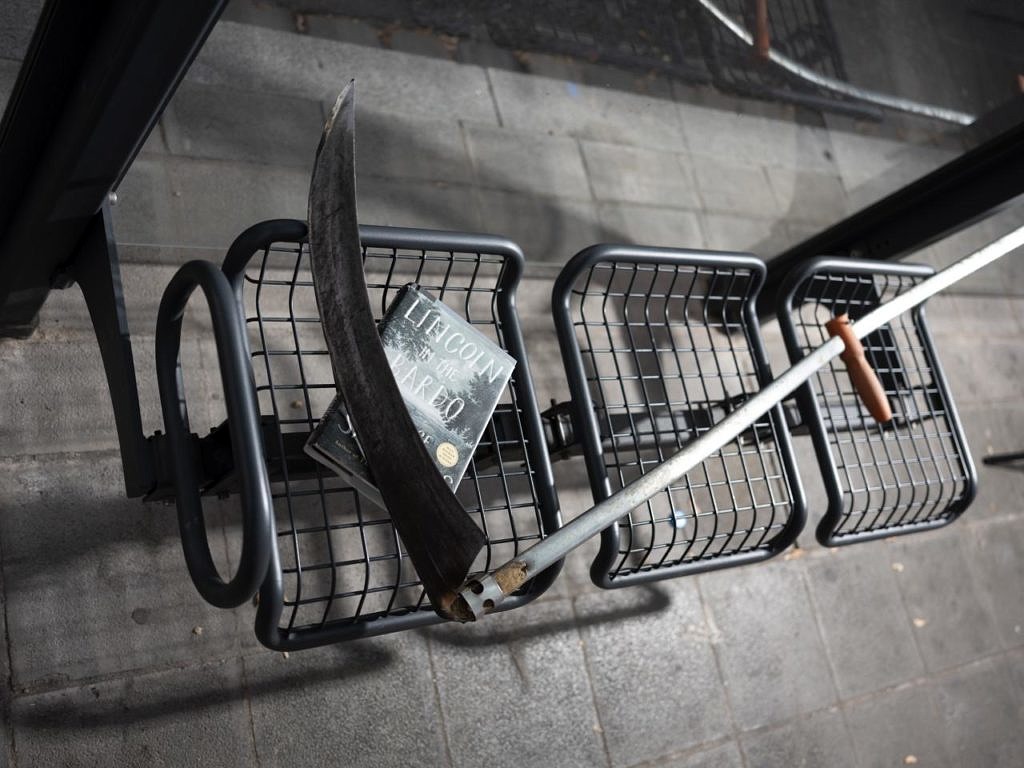 How can and indeed must what we call ‘life’ be re-evaluated in view of death? This is the issue at the heart of Prof. Dr. Antje Kley’s research. (Image: FAU/David Hartfiel)

Death has always featured in literature, and the USA is no exception. Literature there appears to be ‘obsessed with violence and death’, dealing with subjects such as territorial expansion, racist conflicts, illness and war, as well as the frontier and the Wild West. ‘Generally speaking, literary studies are concerned with exploring to what extent imaginative texts allow the reader to explore existential issues and their circumstances.’ Kley has noticed an increase in the number of texts dealing with death over the last 20 to 30 years. The texts are sometimes written from the perspective of the dying person, sometimes of those left behind.

Biographical and fictional texts dealing with ageing, illness and death have different functions. One, according to Kley, is certainly to temper the perceived loss of significance experienced after death ‘breaks in’ to life and help the reader explore possible ways of coping with death: ‘Literature can help the reader to understand an experience which is difficult to grasp, by literally spelling it out and expanding the reader’s imagination.’

The literary scholar is also interested in other issues: What does literature know, what is literature capable of that goes beyond the scope of other discourses such as discussions on medical or insurance-related aspects or issues relating to nursing care? How can literature use fiction to have an effect on public debate on topics such as the advancement in life-prolonging medical care in times of demographic change? These are just some of the questions Antje Kley will be exploring over the coming years. She is quite sure, ‘I still have a lot of research to do!’

The privilege of the last person left on Earth

A gigantic asteroid which collides with Earth, a pandemic, extra-terrestrial intelligence or a nuclear war caused by humans themselves: the destruction of humankind can be triggered by any number of causes. We only need to look at literature, films or video games, however, to see that dystopian narrative scenarios all have one thing in common: There is a survivor.

Unlike traditional apocalyptic scenarios, post-apocalyptic fiction describes the destruction of the world, but not of the individual.

The last person left on Earth seems to enjoy a genuine privilege: that of being the very last person. ‘Unlike traditional apocalyptic scenarios, post-apocalyptic fiction describes the destruction of the world, but not of the individual,’ explains Prof. Maren Conrad from the Department of German and Comparative Studies. The assistant professor researches post-apocalyptic narrative and utopias as depicted in literature. In other words, literature, including literature for children and young adults and video games, which deals with the period after the destruction of the Earth, after the end of the Anthropocene.

According to Maren Conrad, ‘the motif of the ‘last human being’ only surfaced in literature in 1945, inspired by the dropping of the atomic bomb on Hiroshima.’ Post-apocalyptic fiction deals with future scenarios, and depicts the various pathways opening up to mankind. One example cited by Maren Conrad is Arno Schmidt’s narrative ‘Schwarze Spiegel’ (Dark Mirrors) written in 1954. The protagonist burns books and paintings he simply doesn’t like. ‘He has the ultimate authority over art and culture.’ According to Conrad, this is the first novel in German literature, and the first text stemming from postwar experiences, to investigate the last remaining person on Earth and all facets of their personality. 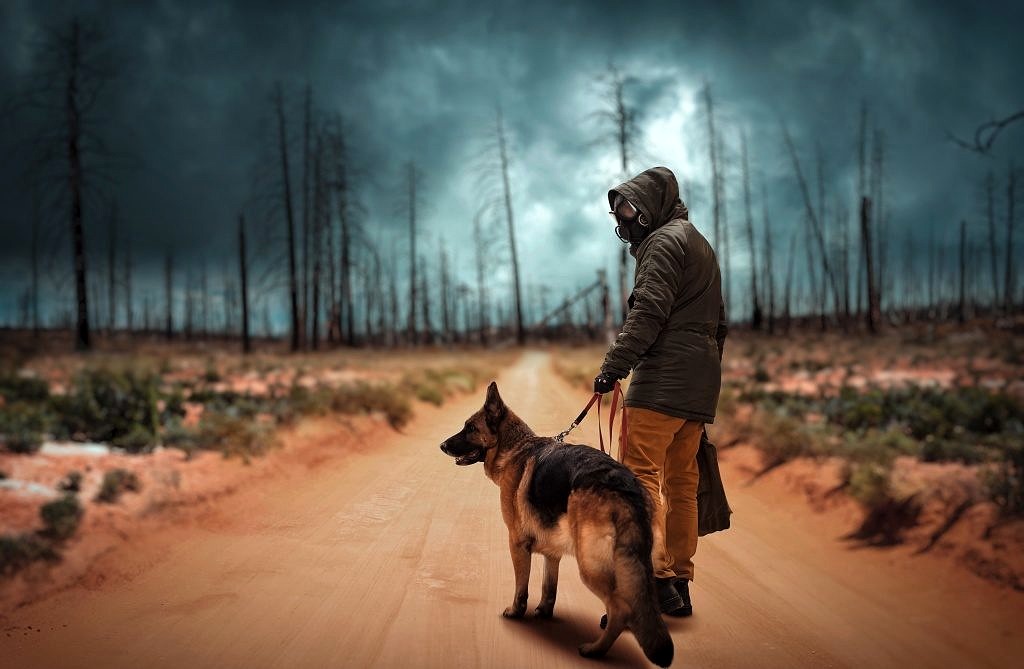 In a post-apocalyptic world, there is only one survivor: the last person left on Earth. (Image: shutterstock/Nomad Soul)

The prevailing fascination of decay

Those studying literature have coined a term for narratives dealing with the last remaining representative of the Homo sapiens species: ‘Robinsonade’. ‘The story of the last remaining individual combines two topics: the Robinsonade and the destruction of Earth.’ The post apocalypse, the circumstances ‘after the end’ once civilisations have been disbanded and the last remaining individual is left to live in absolute isolation raises existential questions: once stripped of everything I previously knew, who exactly am I, what would I like to be? ‘There is no-one left to tell you what you have to do. You are left to your own devices, only your most basic needs are catered for.’ According to Conrad, the moment of obliteration solves the problem of having to fit in with contemporary social policy. Whether in literature or in video games: you are free to set off, make your own decisions and experiment however you want. ‘The fascinating thing about such stories is that they are very playful. Everything the main figure does is done without any ulterior motive.’ In her research, Conrad has discovered that dystopian utopias follow one line of tradition and are evocative of the Romantic world view and its fascination with decay or ‘ruin lust’, paired with the central myth of loneliness.

There is, however, one significant difference between European and American narratives. ‘The last remaining individual is celebrated as a flaneur, who feels at ease in himself. The Romantic tradition makes a contribution, the end is usually left open.’ The USA treats the situation differently. ‘In Anglo-American literature, a new society is usually seen as the greatest good worth striving for, the story usually centres around a core family, and comes to a happy ending.’ 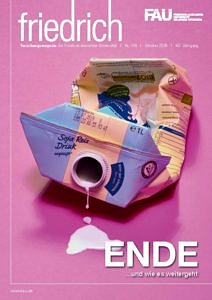 More articles from the magazine can be found under the keyword ‘friedrich’ .