Next generation of infrared sensors

Next generation of infrared sensors

Amir-Abbas Yousefi Amin does his PhD as a member of the Solution-Processed-Semiconductor-Materials (SOPSEM) research group at FAU´s Chair of Materials for Electronics and Energy Technology. Together with his group mates, Mr. Amin developed the next generation of infrared sensors, which are fabricated by using printing technologies, including ink-jet printing. That, in turn, allows for an extremely cost-effective production of such sensors. Mr. Amin and his team now had a special honor: As one of only three teams, they were invited to present a prototype of their sensors to the international specialist audience at the renowned “LOPEC – Driving the Future of Printed Electronics” trade fair and congress in Munich. They are the first FAU team to receive this honor. We talked to Amir Amin about this extraordinary success.

Mr. Amin, what is your field of research? 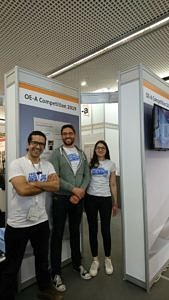 The group I am working for is called Solution-Processed-Semiconductor-Materials (SOPSEM) at FAU´s Chair of Materials for Electronics and Energy Technology, which is led by Prof. Dr. Heiss and which also describes my field of research. In particular, I am working on the development of electronic devices by using printing techniques. For that purpose I make use of novel nano-sized colloidal semiconductors. The group uses chemical methods to create and tune nanomaterials, for instance in sizes and compositions, which reveal useful and often remarkable features.

Together with your research team, you developed the next generation of infrared sensors. Could you please describe the work of your group and how the development of the sensor came about?

Commercial infrared sensors are usually fabricated semiconductor crystals or thin films produced at high temperatures and in vacuum. In comparison to that, our sensors are fabricated by using printing technologies, including ink-jet printing with almost as simple devices as are used in any office. Although this technology has been applied before to electronic product developments, it was almost exclusively applied for organic semiconductors and to metals. In our group the printing of electronic devices was expanded to fully functional inorganic semiconductor inks, formulated and synthesized by colloidal chemistry.

In comparison to the organic semiconductors, devices from these inorganic inks are able to operate at long wavelengths in the infrared, where even the standard silicon devices are unable to operate. At the LOPEC we will introduce the first fully printed infrared sensors from nanocrystal inks. After establishing this technology each detector which consists of various different layers could be printed in a time of 14 seconds only, including the drying time and the fabrication of electric contacts. An advantage of this printing technology is the economic use of the ink, since only a few micrograms of material have to be used per detector, enabled by the precise deposition of small amounts of materials on predefined locations. So far, most solution processed electronic devices based on colloidal nanocrystal inks were fabricated by spin-casting, which results usually in an enormous loss of materials, which we wanted to avoid. The key towards the printing of infrared sensors was thus the development of a semiconductor ink, which is printable within the usual printing conditions.

What is special about this sensor?

The technology we use provides infrared sensors for un-comparable low costs. The synthesized nanomaterials used in the inks are very flexible in the spectral range they should work. Thus, it is straightforward to customize the detectors for the demands of a potential user.

Which application areas are conceivable for the sensor?

There are several spectral regions which can be covered by our infrared detectors including the medical window in the near infrared, the telecommunication window around 1.5 micrometer wavelength and also some atmospheric windows at even longer wavelengths which are of interest for surveillance and defence. In addition, chemical analysis is often based on infrared spectroscopy, making use of infrared detectors, which is for example applied in food control or for detection of harmful substances. We think that our sensors are also ideally suited for integration into infrared-imager systems, which are usually still too expensive for broad applications, when fabricated based on conventional semiconductors. 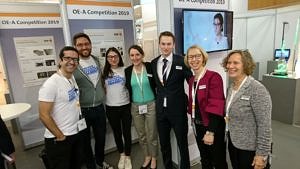 Your team is the first FAU team that was selected as a finalist for the LOPEC pitch. How do you all feel about this?

Of course, it is an honour to be the first representative of FAU at the LOPEC. My motivation going there was to get the chance to demonstrate the results from our research to potential industrial users. At FAU I was educated, got access to laboratories and was supervised over several years, so that I find it natural to represent FAU also after having got some interesting results.

What happens during the pitch?

The LOPEC gives the finalist candidates the opportunity to have a free booth to present their prototypes in an exhibition. Since the visitors of LOPEC represent all the branches of printed electronics in industry and research, it is the best suited platform to present our novel nanocrystal based detectors, to communicate with the leaders of the field and to demonstrate operation of our prototype devices.

What happens if the team wins the pitch?

This question is not important for us, since being there and meeting the global players in the field is already like a first prize win for us.

Thank you very much for the interview, Mr. Amin.