When superstition poses a threat to life

When superstition poses a threat to life

Dar el Salaam is the name of the city in Tanzania where Ambassador Dr. Abdallah Saleh Possi was born and studied law. Possi always dreamt of going to university. After his Master’s degree, he decided to complete a doctoral degree in Germany. As Possi wanted to research the rights of disabled people, it was fortuitous that Prof. Dr. Heiner Bielefeldt, FAU Chair of Human Rights and Human Rights Policy, offered to act as his supervisor. He wrote his doctoral thesis between 2011 and 2014 in Erlangen on the implementation of the UN Convention on the Rights of Persons with Disabilities in Tanzania. Today, he lives in Berlin and has represented his home country Tanzania in Germany and eight other EU states since June 2017.

The mistaken belief in magical bones

Dr. Abdallah Possi suffers from albinism, a congenital metabolic disorder which affects pigmentation and causes insufficient levels of melanin to be produced. Light-coloured hair and pale skin which is sensitive to the sun are the typical symptoms, with the congenital disorder often leading to skin cancer, particularly in people from Africa. However, that is not the only danger for people with albinism: ‘In many countries in Africa, there is a widespread superstition that our bones bring success, luck and riches. Based on this erroneous belief, people with albinism are persecuted, mutilated or even killed. This belief is deeply-rooted in many people’, reports Possi. All the more important, then, to make people understand that albinism is not magical, but rather a medical condition. 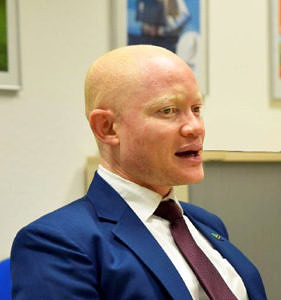 In an interview, Dr. Abdallah Saleh Possi speaks about albinism, explaining that it is a metabolic disorder which affects pigmentation. (Image: FAU/Boris Mijat)

In 2010, a law was passed in Tanzania protecting people with disabilities. Since then, albinism has been legally recognised as a disability and those affected are officially protected by the government. However, serious violations of human rights are still widespread. ‘Tanzania is three times the size of Germany, but, like many other countries in Africa, it has a poor infrastructure. Attacks on people with albinism tend to occur in small, remote communities where police cannot arrive quickly enough and most people are not aware of the medical disorder behind the phenomenon’, explains the Ambassador. It is therefore necessary to continue raising awareness of the fact that the bones of people with albinism do not have magical powers. Here in Germany, Possi’s pale colouring is not particularly unusual. However, in his home country he was often the target of discrimination and bullying, especially in childhood. ‘The children from my village whom I played with every day accepted me the way I am. However, the problems started when I met children from another neighbourhood’, explains Possi. ‘Luckily I was never shy, I was always self-confident and enough of a fighter to know what my rights and options are.’

Abdallah Saleh Possi regards his old university town as a second home. ‘Erlangen was the first town where I lived for any length of time outside Tanzania. I enjoyed the peace and quiet and the fact that I could go everywhere by bike. It is nice to see that Erlangen is still living up to its reputation as a cyclist’s town’, reminisces Possi. Today, he still enjoys returning to his Alma Mater, where he meets former professors and colleagues or gives talks for students studying the Master’s degree programme in Human Rights.