The cell is dead, long live the cell

The cell is dead, long live the cell

As the smallest living unit, a cell can survive alone, but not in a cluster. When the oldest known human being died at the age of 122, some cells in her body had reached the same age, others were replaced after just 60 hours. And yet they all behaved according to plan.

Cells die, cells regenerate – both are crucial processes for the survival of the human organism. As knowledge advances, we are gaining ever greater insights into the correlation between cell death and cell regeneration. Such finely balanced mechanisms can be observed in extremely short-lived intestinal cells as well as in heart muscle cells, which can live an entire human lifetime. The team headed by Christoph Becker, professor for molecular gastroenterology at Department of Medicine 1 at Universitätsklinikum Erlangen, is investigating intestinal cells. Researchers led by Felix Engel, professor for experimental kidney and vascular research at the Institute of Pathology, have specialised in helping hearts damaged by heart attacks beat again. 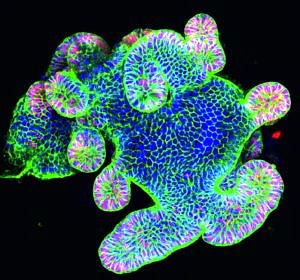 The barrier is just under eight metres long and, if it was unravelled, would cover nearly 30 square metres, the area of a small bedsit. Compared with borders between countries it may appear rather small, but this barrier is to be found in the human abdomen. The intestinal epithelium, the layer of cells surrounding the most important part of the digestive system, takes on all the tasks expected from a border: it differentiates between inside and outside the border, it provides protection from unwanted invaders and it lets those substances which are needed pass through.

The barrier fulfils its manifold tasks with amazing precision. Foreign substances, identified on the basis of the antigens on their surface, are classed as potential threats and are repelled, but nutrients are allowed to pass. Messages have to be forwarded, for example alarm signals which cause organs to activate the cells in the body’s own immune system. All of this is done by a thin layer of closely packed cells. If you picture the epithelium as a wall, it only consists of one layer of stones, where each stone has served its purpose after five days and is replaced.

It goes without saying that a replacement process likes this requires the utmost precision. ‘The correct balance is essential’, summarises Prof. Christoph Becker. If too many intestinal epithelium cells are broken down, gaps appear in the wall and bacteria and molecules can slip through unchecked. The immune system then registers that they are foreign substances and attacks. This leads to chronic inflammation. If, on the other hand, individual epithelium cells do not die, intestinal carcinomas may form over time.

Becker’s working group has already made a surprising discovery whilst carrying out research on this topic. The cells of malignant tumours often refuse to undergo apoptosis, a type of programmed cell death. Severely damaged or old cells usually induce this process themselves, initiating their own destruction. ‘A crucial factor is the activation of caspases,’ explains Christoph Becker. These enzymes cleave proteins in a chain of interconnected processes. Caspase 8 is involved in the first stage of cascades such as these, and scientists often observed that this molecule had been blocked in intestinal tumour cells. ‘Bearing this in mind, cells whose genes we switched off for caspase 8 should have ignored apoptosis signals. What really happened, however, was that they died particularly quickly,’ explains Becker. The team became aware of an only recently discovered cell death programme: if the initiator enzyme is lacking entirely, a type of short circuit is induced. The cascade is redirected to necrosis, the second basic form of cell death.

The combination, known as necropoptosis, could be one way of forcing tumour cells to commit suicide. The research group led by Prof. Becker still has a lot of work to do to clarify the details of how the balance is kept between cell regeneration and destruction in the intestinal epithelium and the factors that can cause disruption to this fine balance.

What is a day to day occurrence for cells in the intestinal epithelium is virtually unheard of in heart muscle cells in mammals. Whilst embryos can form cells such as these, this ability is lost shortly after birth, when the regeneration rate falls to under one percent per year, at most. What could the advantages of this be? According to Prof. Felix Engel, any answer to this question can only be based on speculation. One contributing factor may be that for the heartbeat to stay in rhythm, newly incorporated muscle cells would have to join in with the beat straight away. Another aspect worthy of consideration is that one possible source of error is ruled out if cells do not regenerate, explaining why cancer hardly ever affects the heart muscle. This in itself is not enough, however.

The fact that human hearts are not capable of regeneration has become a major problem in industrial nations. Statistically, heart attacks are the second most common cause of death. Survivors often suffer lasting damage, and have to live with the threat of another, possibly fatal attack. There is no real replacement for cells which pump blood and lymph through the body when they die due to a lack of circulation. Wounds are closed with scar tissue, the repair remains patchy.

Other organisms are ahead of mammals in this respect. Salamanders and frogs, newts or toads – adult amphibians can regenerate their hearts. The same is true for zebra fish, which are a popular choice for fish tanks with their shimmering blue stripes. ‘Such animals never entirely stop growing,’ says Felix Engel. ‘Research into how zebra fish regenerate missing fins has been going on for a long time. It follows that the next stage was to investigate how functional heart cells can be regenerated using the same model.’

What is lacking in human heart muscle cells compared to these animals? In 2015, Prof. Felix Engel and Dr. David Zebrowski discovered that they only carry out the first step towards reproduction: the DNA stored in the cell nucleus is doubled. Once that has been done, a spindle apparatus should pull the chromosomes apart using fine threads to form identical sets of DNA. This is performed by the centrosome, made up of two centrioles. In newborn mammals, this structural unit breaks up into its two components, whilst it remains intact in the zebra fish.

Research breakthroughs such as these raise hopes that the human heart may be able to learn how to regenerate at some point in the future. Felix Engel calls for patience: ‘Fundamental research takes time. Jumping to conclusions too quickly can be misleading.’ His studies have since shown that heart muscle cells from mice and rats can be induced into regenerating two to three days after birth. A receptor in the cell nucleus which receives hormonal signals can be activated artificially; in this case, cell growth is followed by splitting. If the protein is blocked, even zebra fish hearts can no longer be made as good as new again.

However, there is a long way to go before this research can be applied in practice, with many pitfalls along the way. Bearing this in mind, the heart specialist is not concentrating exclusively on regeneration: ‘Replacement tissue is another extremely promising field.’ If rhythmically pulsating cells from the laboratory are to be able to be integrated into a beating heart, they must first attach to a carrier which transmits electrical impulses. The Erlangen team and colleagues from Bayreuth have found inspiration in garden spiders, as their cobwebs contain a substance suitable for use as scaffolding material. For wounded hearts this would be equivalent to a plaster made of silk.