Scientists at FAU have researched how the moon landing was reported in the East and the West.

On 21 July 1969, almost exactly 50 years ago, Neil Armstrong and Buzz Aldrin landed on the moon. They were the first men to set foot on the moon, 384,400 kilometres away from Earth. The success of the Apollo 11 mission was an important victory for the USA in the ‘space race’, which the USSR had led up until the mid 1960s: the first satellite, the first animal, the first man in space, the first woman in space were all successes for the Soviets.

The moon landing was a major topic in the media on both sides of the political divide – on television, on the radio, in newspapers. Interestingly, the main focus of the reports and articles was not exclusively, and often not even predominantly, on praising their own achievements. Instead, it appears as if observing the media on the other side of the Iron Curtain was considered the most effective form of publicity. In other words, the media reported on what the other side was reporting. ‘Such recursive observation has been a fixed component of reporting about space exploration in the East and the West from the outset,’ says Dr. Sven Grampp from the Institute of Theatre and Media Studies at FAU. ‘The space race took place against the backdrop of a constant flow of observations from others.’ Grampp has analysed reporting on the space race and has curated an exhibition on the subject for the Museum of Communication in Nuremberg.

Credit where credit is due

The media in the socialist countries certainly did acknowledge the achievement of the first manned lunar landing. The socialist newspaper Das Neue Deutschland, for example, quoted the Vice President of the Russian Academy of Sciences who expressed his ‘utmost respect for the achievements of the astronauts Armstrong and Aldrin’, who took ‘a bold step out into the unknown’. However, the sub-heading has a quote from the West German tabloid Bild: ‘Crisis-ridden USA needed success.’ At the end of the article, West German television is quoted as saying: ‘Even in the country which has planted the flag on the moon, tens of thousands are wondering: Why reach for the stars? Is there not enough to do down here?’ ‘This clever change of perspective is meant to suggest that it is the media in the West which are critical of the moon missions, not the Soviet Union,’ explains Sven Grampp. 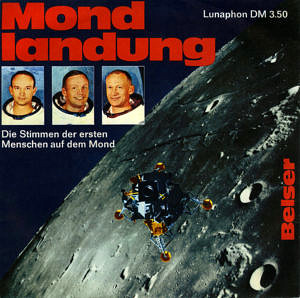 The moon landing on vinyl: a record with radio messages from the astronauts Armstrong, Aldrin and Collins. (Image: Belser Verlag)

Television in the East and the West

Television in the DDR took the same approach. The DDR, together with the Soviet Union, China, North Korea and South Vietnam, chose not to broadcast the moon landing live on television. The programme broadcast in October 1969, three months after the return of the Apollo astronauts, titled ‘Ways into space. Tendencies and prospects’ shows how the ‘bourgeois press’ commented on the event: The success of the Apollo mission was gained at the expense of increased self-doubt, national depression and the growing instability of the capitalist system. The programme reported that according to a respected West German newspaper, the US space programme was too restricted, whilst the Soviet programme was better suited to future expansion and had a greater likelihood of being successful in the long run. At the beginning of the broadcast, viewers were shown an animation clarifying where the future of space travel lay: not in venturing to far off celestial bodies, but rather in linking Earth to a network of Soviet satellites. West German television, on the other hand, broadcast the landing live. During their reporting, they compared the cultures, but not along the lines of the traditional friend-enemy pattern. The television programmes Weltspiegel and Auslandsjournal broadcast on the West German television channels ARD and ZDF took a rather cool stance towards pictures of euphoric American citizens, Apollo advertising stickers and toy rockets, taking a somewhat sarcastic tone when commenting on some of them.

Their attitude towards Moscow, however, appears moderate in comparison: the Russians are not portrayed in the slightest as the bogeymen, rather the reports mention that in spite of choosing not to broadcast the moon landing, the Soviet Union would in principle be in favour of a collaboration with the USA in space. Grampp: ‘It is safe to assume that the Erste Deutsche Fernsehen (ARD) presumed that DDR citizens would also watch the programme and decided to broadcast a programme on the lunar landing designed to appeal to the whole of Germany.’

The German fathers of space travel

Weltspiegel, however, did not only focus on the major powers on Earth and in space, the USA and the USSR, but also on the role of Germany as the scientific pioneers of the moon mission. The reporter in chief of Südwestfunk, Ernst von Khuon, science fiction author and former war reporter in the National Socialist propaganda troops, gave viewers a brief history of space travel. He explained that, inspired by Jules Verne, the German physicist Hermann Oberth explored the idea of space travel based on precise mathematical calculations, which in turn inspired Wernher von Braun to work at developing rocket propulsion. 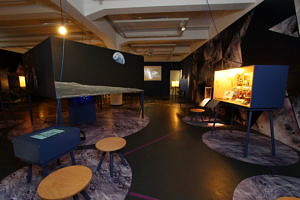 Von Braun was indeed the engineer mainly responsible for inventing the Saturn V rocket without which the US astronauts would not have been able to fly to the moon. However, he was also an SS officer and played a leading role in the development of the V2 rocket which claimed the lives of approximately 8,000 British citizens in 1944 and 1945. ‘The press in the DDR had focused on Wernher von Braun’s past since the early 1960s,’ says Sven Grampp. ‘It is, however, glossed over entirely in Khon’s potted history and the ARD programme as a whole. Instead, the programme is aimed at portraying the moon landing as the result of German engineering skills and a part of the cultural identity of Germany as a whole.’

You can visit the exhibition Spaceship Living Room. The moon landing as a media event in the Museum of Communication in Nuremberg.

Click on the image to open the pdf file

The current alexander focuses on the following topics: 50 year anniversary of the landing on the moon, the Internet – in danger? Article 17 of EU copyright reform, anniversary at FAU Language Centre and a new article from the series ‘Interesting places at FAU’, this time about the observatory.