You’re active in university policymaking. What does that involve?

Eda: We are both elected students’ representatives (members of StuVe). We meet regularly to discuss problems which affect us students and try to find solutions to them. We then approach the Executive Board with our concerns.

Michael: The University also provides us with a certain amount of funding for student groups. If one of the student groups wants to print flyers, for example, they can approach us and we provide them with financing.

How can students get involved in university policymaking, and what kind of things can they achieve by doing so?

Eda: The easiest way is to become actively involved in student associations (FSI) or other student groups. Another option is to become involved in the working groups organised by the students’ representatives (Stuve).

Michael: Another possibility is to become involved in the Committee for the Allocation of Tuition Fee Compensation, half of which is made up of students. This committee allocates money to various projects aimed at improving teaching. In the Department of Physics, for example, this allowed us to purchase a binding machine and a new access control system for the doors. This would be particularly suitable for those students who don’t want to deal with too many administrative hurdles.

What working groups are there for student representatives?

Eda: We try to always keep up to date with everything which affects us students. That is also reflected in the various committees: new ones keep being added, others become inactive once the topic is no longer current. 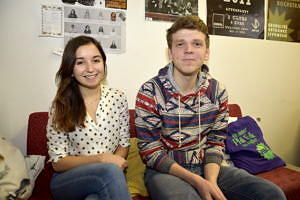 ‘A lot of red tape, but we can achieve a lot’ – Eda and Michael speak with frisch! about university policymaking. (Image: FAU/Luisa Macharowsky)

And why should students get involved?

Eda: By becoming involved in university policymaking you really can make a difference. We are in direct contact with the Executive Board of the University and can communicate our concerns directly. At the same time, we meet people who are not involved in our degree programme and gain an insight into the workings of the university.

Michael: And we learn how to write e-mails (laughs) and, of course, take responsibility.

What are some of the things you have achieved so far?

Eda: Thanks to us, learning spaces are now available in the Faculty of Humanities, Social Sciences, and Theology.

Michael: And we have introduced the weekly Wednesday e-mail, with news and reports on what we do. In these mails, we also ask students for any suggestions for improvements. We get a lot of feedback as a result.

How are student representatives elected?

Eda: There are two election days every summer. Students should take their student ID card and go to the polling station for their faculty. First of all, students are able to vote for Student Committees (FSV). Various lists are available to choose from. They can give four votes to individual people or a whole list.

Michael: They can then also vote for the Student Council. The lists are political in nature and often follow certain party lines. However, there are also neutral lists such as the FSI list.

What are you particularly concerned about at the moment?

Eda: The fact that symptoms have to be listed on doctor’s certificates. If students are ill and require a doctor’s certificate to prove that they are not able to sit an examination, they have to state their symptoms. This is a problem from a data protection point of view. We are therefore trying to get the University to accept the yellow form issued by doctors confirming an inability to work (known as an Arbeitsunfähigkeitsbescheinigung).

Michael: And sustainability is of course always important to us.

Which groups are especially helpful for first-year students?

Michael: The student associations (FSI) and the students’ representatives (Stuve) are a great first point of contact for first year students. There they can meet a lot of students who have been involved for some time already and who can give them some tips.

Eda: Or the Student Committees (FSV), which have members from different faculties.

The ABC of university policymaking

Almost every degree programme has a student association (Fachschaftsinitiative, FSI). Their members, who are all students, can advise you on all matters relating to the degree programme.

Each faculty has a Faculty Council, made up of 22 members, four of whom are students. The Faculty Councils launch new degree programmes, approve examination regulations and appoint professors.

LGBT, computers and IT, publicity… These are just a few of the topics dealt with by working groups where you can take part without having to be elected or meet any obligations. At present, there are ten main working groups and additional committees.

The Senate decides on legal regulations, establishing degree programmes, appointing honorary professors, and awarding honorary academic titles. Two of the ten voting members are students. If you become involved in the Senate, you can make your voice heard directly!

The General Student Committee is the executive body of the Student Council.

More information is available (in German) at: www.stuve.fau.de 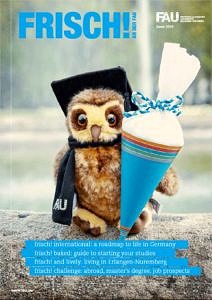