Researchers at FAU develop a new method to tackle downy mildew on vines.

A team of researchers at FAU led by Dr. Stefan Schwab is researching effective pesticides for organic wine growing. The researchers hope to use the microencapsulation principle to tackle the problem of downy mildew, a serious fungal infection which affects vines. Their research is part of the large collaborative project VitiFIT aimed at keeping vines healthy in the organic wine-growing industry, which has received a total of 6.3 million euros in funding from the Federal Ministry of Food and Agriculture (BMEL).

More and more wine growers in Germany are growing their vines organically. At the current time, this applies to almost 10 percent of vineyards throughout the whole of Germany. The German government would like to increase the share of organic agriculture to 20% in future. The aim of organic viticulture is to maintain a balanced ecosystem in the vineyard whist minimising damage to the environment. For this reason, no synthetic organic substances are used for fertilising or protecting crops.

The challenge of protecting crops

Protecting crops effectively is one of the greatest challenges faced by the organic wine growing sector. Downy mildew, a fungal infection which is also known as plasmopara viticula, can have a disastrous effect on the green parts of the vine such as leaves and young grape berries. Organic winegrowers have turned to copper compounds to stop the spread of the disease. Even in conventional vineyards fungicides based on copper are used in addition to synthetic organic pesticides in order to prevent resistance to the synthetic products. 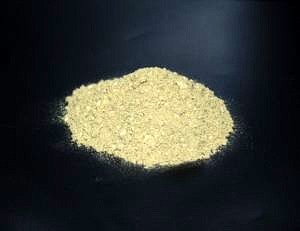 Microcapsules are to be used to reduce the use of copper as a pesticide in organic vineyards. (Image: FAU/Stefan Schwab)

Copper ions prevent spores from germinating Copper compounds are not fully approved for use in fighting downy mildew in organic vineyards in Europe. The EU regulation on organic production and labelling of organic products now only permits a total of 28 kilogrammes of pure copper to be used per hectare over the next seven years, in other words an average of four kilogrammes per hectare. In Germany, the volume of pure copper has even been restricted to a maximum of 17.5 kilogrammes per hectare over five years, an annual volume of 3.5 kilogrammes per hectare with a maximum of 4 kilogrammes permitted in an extreme year. Whilst copper is a natural substance, high concentrations of this heavy metal in soil can damage large numbers of organisms which live in the soil. This is the case, for example, in vineyards where vines have been grown on the same slopes for decades and copper has been used to protect crops for more than one hundred years. The heavy metal has already accumulated in the soil in these areas.

The practical research project VitiFIT is therefore looking for alternative methods for protecting crops and thereby increased planning security for organic wine growers. It is split into four main areas. The first area concerns developing, optimising and establishing methods and technical solutions for organic wine growing in order to improve the health of the vines and tackle downy mildew. Dr. Stefan Schwab and a team from the Institute of Process Machinery and Systems Engineering at FAU led by Prof. Dr. Eberhard Schlücker are contributing their expertise to the working group. 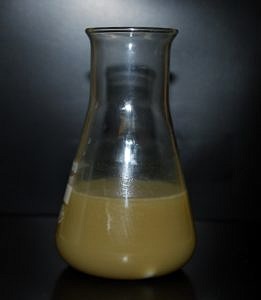 Farmers spread the pesticide packed in the microcapsules as a watery suspension. (Bild: FAU/Stefan Schwab)

‘We want to reduce the use of copper in organic viticulture to just 2 kilogrammes per year, and hope to be able to do without copper altogether in the long term. The method we have chosen to help us achieve this is microencapsulation,’ Dr. Schwab explains. ‘Using this procedure, active ingredients in gaseous, liquid or solid form can be surrounded by a coating.’ The microcapsules made of fat act like a pesticide reservoir: when it rains, some of the copper ions are washed out of the tiny capsules. They protect the vines from downy mildew, which spreads most rapidly in a damp environment. The remaining copper stays embedded in the particle coating on the plants until the next time it rains.

In a research project which has just been completed, the team of researchers at FAU has been investigating how substances from the liquorice plant can be encapsulated in order to be used as a biological pesticide. The VitiFIT project now hopes to combine the encapsulated liquorice extract with the newly developed copper capsules. ‘We are currently experimenting with innovative capsule combinations and are working to fully characterise them,’ says the researcher. The aim is to drastically reduce the amount of pure copper used. By combining microencapsulation, further natural fungicides and special fungi-resistant vines (PIWI) they hope to be able to continue to further reduce the amount of copper needed in future.

The second area covered by VitiFIT is the development and improvement of fungus-resistant (PIWI) vines, and the third area deals with the established prognosis model ‘VitiMeteo Rebenperonospora’ which is already being used in the wine growing industry to assess the risk of infection. The fourth area concerns knowledge transfer and how to get all stakeholders on board. VitiFIT is being funded as part of the German government’s programme for Ecological Agriculture run by the Ministry of Food and Agriculture and relies on involving organic wine growers directly. Geisenheim University is responsible for coordinating the project. FAU is one of the partners in this project which is important for the wine industry, together with other research institutes, organic associations, companies and wine growers.

Detailed information on microencapsulation is available on the website of the Institute of Process Machinery and Systems Engineering.

Geisenheim University published a press release when the project was launched. It is available on the university’s website.