The power of words

The power of words

Without us really being aware of it, language shapes the way we perceive the world. The research of social psychologist Prof. Dr. Susanne Bruckmüller focuses on how words shape the way we think.

Prof. Bruckmüller, you research framing effects, metaphors and comparisons. What is framing?

Prof. Susanne Bruckmüller: Broadly speaking, it is the way we talk about a subject. In psychology, what we mean is that words which really have an equivalent meaning can lead to different reactions. If I say ‘smokers die sooner’ or ‘non-smokers live longer’ it really comes down to the same thing, when seen logically. And yet people tend to react differently to each statement.

Translated literally, the Minister of the Interior Horst Seehofer named his latest law facilitating deportation ‘Ordered Return Act’. The refugee organisation Pro Asyl, on the other hand, refers to it as the ‘Get Lost Act’. Is that an example of framing?

Yes it is. It also demonstrates the issue of which name we choose to refer to a topic. But yes, that is also an aspect of framing. Anyone who drafts speeches for politicians obviously spends a lot of time mulling over exactly which words to use. The decision is based on strategic considerations. 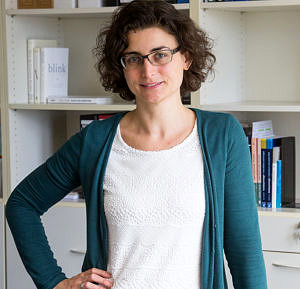 After studying psychology in Erlangen-Nürnberg and Kansas (USA) and spending time doing research in Exeter (UK) and Leuven (Belgium), Prof. Dr. Susanne Bruckmüller became a junior professor for social psychology at the University of Koblenz-Landau. In 2017, she was appointed to the Chair of Social Psychology, Gender, and Diversity at FAU. Bruckmüller has been awarded two teaching awards and two awards for early career researchers.

Does this effect usually go unnoticed?

Usually, yes. Sometimes someone might notice something if highly unusual wording is chosen. In politics, in particular, you occasionally stumble across a certain wording which makes you wonder why someone chose to express themselves in that way. However, very often it happens subconsciously. We express things spontaneously in the way which sounds best to us at that time, without any agenda.

What first brought the topic to your attention?

I studied in the US for two years, and took a course on culture and psychology. During the course, I was very often called on to explain why we in Germany treat some things differently from the Americans. I had the impression that I was always on the defensive. However, at one point I realised that you can turn the comparison on its head. You could just as easily ask why the Americans do things the way they do. The topic has had me in its grip ever since. To give some other examples: we tend to explain to what extent gays and lesbians are different from heterosexuals, not the other way round. We talk about to what extent migrants differ from the indigenous population. We more often focus on women when discussing differences between the sexes.

What are the consequences of looking at the world in this way?

It can lead to a feeling of unease and awkwardness, especially for groups of people who are already stigmatised, have a lower social standing or do not correspond to society’s expectations. We were able to demonstrate that this is the case in particular in studies of singles and people in a relationship. By comparing women to men, you are giving men the higher status. The men then remain in the background and are not questioned. Inequality is maintained or even strengthened as a result. 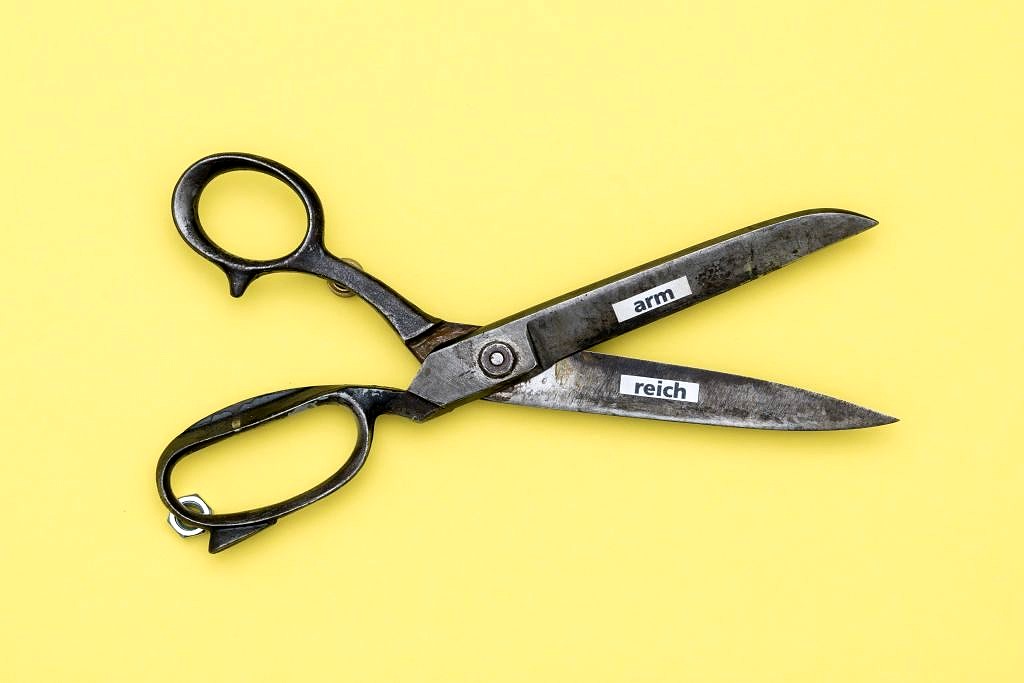 Language shapes the way we perceive the world – for example the ‘divide between the rich and the poor’. (Image: Uwe Niklas)

One of your research projects concerns ‘Framing effects in the context of social inequality.’ What is it about?

We are looking predominantly at economic inequality. We are investigating, for example, metaphors such as the ‘divide between the rich and the poor.’ With the help of more than 100 test persons, we monitor the effects of using images such as these. We also look at whether we tend to say ‘the poor have less than the rich’ or ‘the rich have more than the poor’. Interestingly, the first sentence is seen to be problematic. Having much less than others feels unfair. However, people have fewer issues with the second sentence.

In these cases, it depends what sounds more familiar. Generally, people spontaneously choose the ‘more than’ form of comparison much more often. As result, these comparisons come across as being more credible. This is the reason why people are more likely to believe the statement that coffee has more caffeine than tea than its counterpart. Our test persons found texts with a lot of ‘more than’ sentences considerably better written, more trustworthy and credible than texts with a number of ‘less than’ comparisons, although they actually expressed exactly the same thing.

In studies in the UK, you also researched the use of metaphors. What effect do figures of speech have?

Metaphors such as the ‘glass ceiling’ which women cannot break through or the ‘old boys’ club’ lend interest and importance to a topic. An image such as this illustrates a problem well. At the same time, you need to watch who is placed in the foreground. If I say ‘women are under-represented in managerial positions’, no matter whether I use an image or not, then the explanations will focus on women. Arguments are then raised such as women are not so interested in having a career and that they always want to strike a balance between their career and their family. If the focus is on the over-represented men, you are more likely to hear statements centring on men or structures. For example, that it is usually expected of men that they pursue a career, or that men have a problem with women in managerial positions, or that organisational cultures are strongly male-dominated. The suggested solutions then focus predominantly either on the women or the structures, depending on the focus of the language. It is therefore important to make hidden structures visible. Perhaps there are some men being kept up by the glass ceiling although they don’t actually belong there. You could also ask about the expectations of pursuing a managerial career. This then moves away from a topic concerning women to a topic concerning society as a whole. 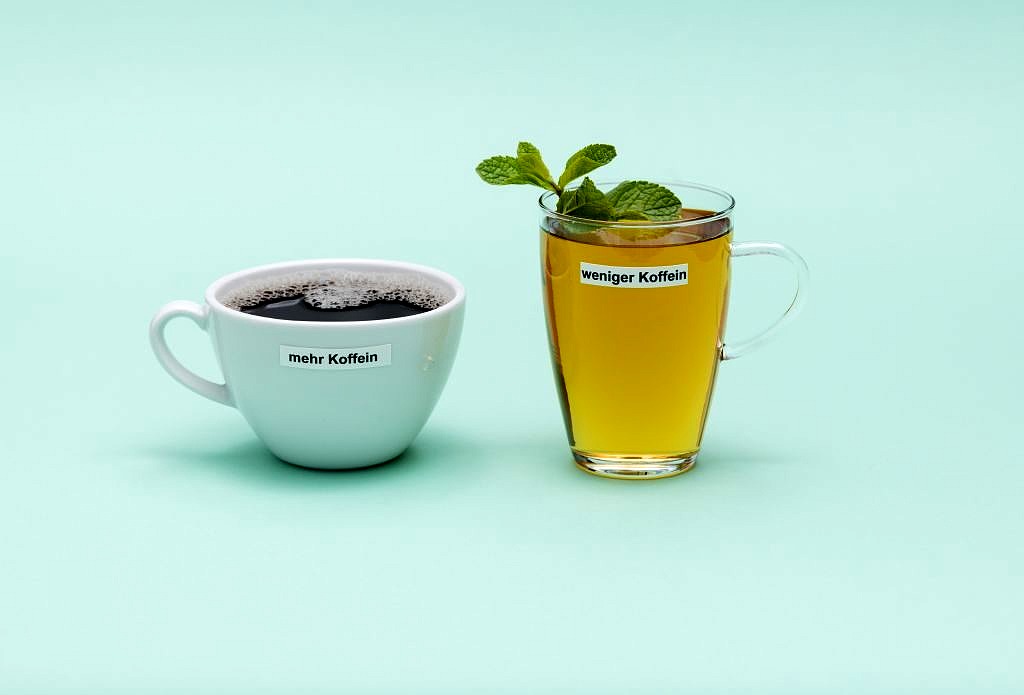 Gender-sensitive language is a popular topic at the moment. What does research have to say?

Gender-sensitive language means that the language you use has to refer to all the people you mean.

It can lead to massive criticism, even in the context of science. Have you already come across that?

There are a lot of people who reject gender-sensitive language, including scientists and academics. However, they are not normally the people who actually deal with the factual aspects of language and cognition. The data largely speaks for itself. The opposition largely comes from the fact that changing the language you use requires effort. That is often seen as a restriction of personal freedom. However, hardly anyone wants to dictate to private individuals how to speak.

Could you claim that words are subtle seducers?

These fears do exist, but it is not a wording I would choose. Words have a great influence on how we think and how we view the world. Often, however, they are unconscious processes. Slight differences in wording sometimes have considerable influence on how we think about a topic. I would therefore welcome it if people started to think about the words they use. We should use language much more consciously. If you decide to use the masculine term, then it is at least a conscious decision and not simply something which has happened by mistake or as a matter of habit.

Gesa Coordes runs her own journalist agency focusing on academia, science and medicine. She works for the Deutsche Universitätszeitung and was the Marburg correspondent for the Frankfurter Rundschau for 20 years.