Wildlife observation by the second

Wildlife observation by the second

A research team led by FAU, in which the Museum für Naturkunde Berlin, the Technische Universität Braunschweig, the University of Paderborn, the Brandenburgische Technische Universität Cottbus-Senftenberg, the University of Bayreuth and the Fraunhofer Institute for Integrated Circuits IIS are involved, presented the bat-tracking system BATS in Berlin, which automatically collects social contacts between wild animals on a second by second basis for the purpose of analysing social networks. How resilient are friendships between vampire bats? How does a young common noctule bat learn to hunt? How fast does the heart of a nectar-feeding bat beat? And why do researchers want to know?

The research group ‘BATS – a Broadly Applicable Tracking System’, funded by the German Research Foundation (DFG) and led by FAU, has developed a completely new and high-performance wildlife observation system in an interdisciplinary team from the fields of electronics, computer science and biology that allows research in unprecedented detail and even on such small animals as bats.

Technological innovation drives biological research The BATS system, an ‘Internet of Animals’, collects social contacts between wild animals fully automatically and to the second for the analysis of social networks, observes high-resolution trajectories in dense forests and at the same time counts the rapid pulse of the animals. The central goal is to advance wildlife research worldwide with technology ‘made in Germany’ in order to sustainably protect nature. Understanding the behaviour of wild animals means laying the foundations for successful nature conservation. 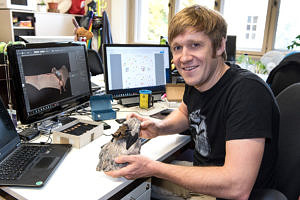 Dr. Simon Ripperger showing the size of the tracking sensor on a bat specimen. It is so small that it does not interfere with the animal’s natural behaviour and provides researchers with valuable information. (Image: Carola Radke, MfN 2019)

The animals carry small transmitters with the functionality of a network computer: data are transmitted, received, processed and stored, in spite of the sensor only weighing one gram – including its own energy supply. The decisive factor here is that the sensor does not interfere with the normal behaviour of the bats. As soon as an animal passes a base station, for example in its quarters, the stored data are automatically downloaded.

‘Just a few years ago collecting such high-resolution data on entire social groups of free-living bats was simply inconceivable,’ says Dr. Simon Ripperger, a scientist at the Museum für Naturkunde Berlin who tested the new technological developments in the field. From his doctoral thesis, however, he is also familiar with the traditional methods when he had to follow individual bats on foot using radiotelemetry. ‘The recipe for success for the technological quantum leaps that have been made possible on the basis of our almost seven years of work was the close interdisciplinary cooperation between researchers from the fields of technology in Erlangen and biology in Berlin,’ adds Prof. Dr. Dr. Robert Weigel, spokesperson of the research group and member of the Chair of Electronics Engineering at FAU. The project involved joint field trips of the BATS team to Franconian Switzerland, Berlin and the tropical rainforest in Panama to observe bats.

‘In the future, the application should not be restricted to bats,’ says Prof. Weigel, ‘we also want to introduce BATS to the market and plans for a spin-off are in the pipeline.’ In addition to observing other vertebrate groups in the field, such as birds or lizards, BATS also offers the possibility of investigating the behaviour of farm animals in agriculture in order to monitor animal health or improve husbandry conditions in the future.