Researchers at FAU, the Paul Scherrer Institute in Switzerland and other institutions in Paris, Hamburg and Basel, have succeeded in setting a new record in X-ray microscopy. With improved diffractive lenses and more precise sample positioning, they were able to achieve spatial resolution in the single-digit nanometre scale. This new dimension in direct imaging could provide significant impulses for research into nanostructures and further advance the development of solar cells and new types of magnetic data storage. The findings have now been published in the renowned journal ‘Optica’ with the title ‘Soft X-ray microscopy with 7 nm resolution’. 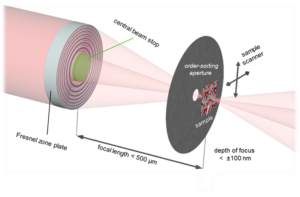 Fresnel zone plates are most commonly used as diffractive focusing elements in X-ray microscopy. In the Erlangen-STXM at the Paul Scherrer Institute, the beam is focused onto the specimen, which is raster-scanned at the highest precision. The transmitted beam is sensitive to local X-ray absorption, which probes elemental, electronic, magnetic, or chemical variations. (Image: Dr. Benedikt Rösner, Paul Scherrer Institute)

Soft X-ray microscopy, which uses low-energy X-rays is used to investigate the properties of materials in the nanoscale. This technology can be used to determine the structure of organic films that play an important role in the development of solar cells and batteries. It also enables chemical processes or catalytic reactions of particles to be observed. The method allows the investigation of so-called spin dynamics. Electrons can not only transport electric charge, but also have an internal direction of rotation, which could be used for new types of magnetic data storage.

To improve research into these processes in the future, researchers need to be able to ‘zoom’ in to the single-digit nanometre scale. This is theoretically possible with soft X-rays, but up to now it has only been possible to achieve spatial resolution of below 10 nanometres using indirect imaging methods that require subsequent reconstruction. ‘For dynamic processes such as chemical reactions or magnetic particle interaction, we need to be able to view the structures directly,’ explains Prof. Dr. Rainer Fink from the Chair of Physical Chemistry II at FAU. ‘X-ray microscopy is especially suitable for this as it can be used more flexibly in magnetic environments than electron microscopy, for example.’

Working with the Paul Scherrer Institute and other institutions in Paris, Hamburg, and Basel, the researchers have now broken a new record in X-ray microscopy as they have succeeded in achieving a record resolution of 7 nanometres in several different experiments. This success is not based primarily on more powerful sources of X-rays, but on improving the focus of the rays using diffractive lenses and more precise calibration of the test samples. ‘We optimised the structure size of the Fresnel zone plates which are used to focus X-rays,’ explains Rainer Fink. ‘In addition, we were able to position the samples in the device at a much higher accuracy and reproduce this accuracy.’ It is precisely this limited positioning and the stability of the system as a whole that have prevented improvements in resolution in direct imaging up to now.

Remarkably, this record resolution was not only achieved with specially-designed test structures, but also in practical applications. For example, the researchers studied the magnetic field orientation of iron particles measuring 5 to 20 nanometres with their new optics. Prof. Fink explains: ‘We assume that our results will push forward research into energy materials and nanomagnetism in particular. The relevant structure sizes in this fields are often below current resolution limits.’

The project has received funding from the Federal Ministry of Education and Research (BMBF), the German Research Foundation (DFG) and the EU H 2020 Research and Innovation Programme.