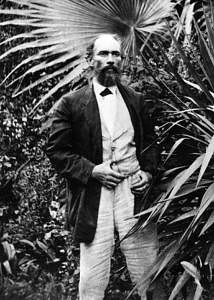 Dr. Hermann Bruno Otto Blumenau (1819-1899) studied at the university in Erlangen from September 1844. In 1846 he completed his studies with a doctoral thesis on the relationships between alcaloids and their related salt bases. During his studies, one of the scientists who supervised and encouraged him was Carl Friedrich Philipp von Martius.

After Blumenau completed his studies, Carl Friedrich Philipp von Martius supported him in achieving his life goal of creating a new home and way of life for German exiles in Brazil.

In 1850, Blumenau and seventeen German immigrants worked single-handedly and without resorting to slave labour to found the settlement at the side of the river Itajaí which would later bear his name, Blumenau in the state of Santa Catarina, South Brazil. Today, this city with its German origins and a population of approximately 360,000 is the most well-known German settlement of its kind in Brazil, and is a well-known exhibition, media and economic centre which attracts numerous tourists who are keen to experience the ‘Bavarian’ Oktoberfest in Blumenau and see the German half-timbered houses at first hand.

In 2019, the 200th anniversary of the founder’s birth was celebrated in Blumenau SC, attracting a lot of media attention.