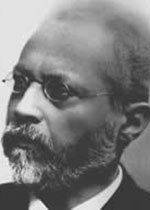 After completing his studies and doctoral degree at the University of Heidelberg, Max Noether became a professor at FAU in 1875, a position which he held for 44 years.

Max Noether is the founder of the theorem on algebraic curves and surfaces. He suffered from the lasting effects of polio which he had contracted in his youth, but was an incredibly talented mathematician who regularly exchanged ideas with various English, Italian and German mathematicians, maintaining contact with these colleagues throughout his lifetime.

His daughter Emmy Noether followed in his footsteps and became one of the most famous female mathematicians.
Image: Department of Mathematics