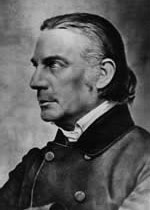 By modern standards, Wilhelm Löhe had a less than perfect career. He never left his position as a village priest in Neuendettelsau and he was often at loggerheads with the state church of Bavaria. However, he had the most lasting effect on Protestantism in Bavaria of any priest since Martin Luther.

He was born on 21 February 1808 in Fürth and began studying theology in Erlangen when he was 18 years old. Two professors of theology became particularly important to him, Gottlieb Philipp Christian Kaiser and the reformed theologist Christian Krafft. The latter had been strongly influenced by revivalism, which also shaped Löhe’s views. His personal reading added to the knowledge gained during lectures, and Thomas von Kempen’s work ‘Von der Nachfolge Christi’ (the imitation of Christ) left a particularly lasting impression on him. He was converted to Lutheranism by David Hollaz. Student life, on the other hand, did not have a particularly strong influence on him. After a short time at university, he joined a Burschenschaft, a kind of student fraternity, but was a friend of neither tobacco nor beer. In the summer semester 1828, he moved to pursue his studies elsewhere in Berlin, but neither Schleiermacher nor Hegel had a great effect on the young student. At his mother’s request, he moved back home after just one semester. In October 1830, Löhe complete his studies with outstanding grades.

After holding various other positions, he arrived in Neuendettelsau on 6 August 1837, where he spent the next 35 years. One of his greatest achievements was to set up Diakonie Neuendettelsau in 1854, a Christian social welfare organisation which now has over 6,000 employees, making it one of the largest branches of the Diakonie in Germany today. Löhe is also responsible for starting up the missionary work which is still carried out from Bavaria today. It is thanks to Löhe that settlements such as Frankenmuth and Frankentrost in the US state of Michigan exist. He established ‘Gesellschaft für Innere und Äußere Mission im Sinne der lutherischen Kirche’, a society for missionary work carried out by the Lutheran church. His also wrote works on theology and, in particular, the history of the church, was involved in church politics and conducted research into the history of liturgy. He died in Neuendettelsau on 2 January 1872.
Image: We would like to thank Diakonie Neuendettelsau for kindly allowing us to use this image.