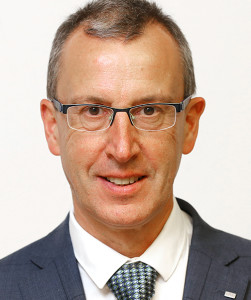 Prof. Dr. DhC Enrique Zuazua is one of the leading minds in the field of applied mathematics, currently Professor of Applied Mathematics at Universidad Autónoma de Madrid. He has garnered numerous important national and international awards and has a broad network of scientific contacts and collaborators around the world. This year, he also joined Academia Europaea. From 2014 to 2015 he worked at FAU as a Humboldt Research Awardee. On November 4, 2015, he was officially appointed as FAU Ambassador – the first in a series of international research alumni who will take on this honorary position in the coming years.

As a visiting professor, Zuazua has taught and conducted research in, among others, the USA, Brazil and Cambridge and at various French universities. One of his most proud achievements is to have mentored 23 PhD students that now run fruitful academic careers all around the world; another, having had the privilege of launching the BCAM, Basque Center of Applied Mathematics in Bilbao, in his own country.

Prof. Dr. Zuazua, why did you decide to take on the role of FAU Ambassador and what do you see as your main objectives in this role?

I have been collaborating scientifically with Professor Günter Leugering for many years. When he joined Friedrich-Alexander University (FAU) this led naturally to collaboration with his team, Department and FAU. I had the honour to be a Humboldt Research Awardee at FAU in the academic year 2014-2015. This was a fruitful academic period and a very rewarding one for my family and me. It is now an honour to become an Ambassador for FAU, an institution with which I share values, vision and projects, and their projection into the international scientific community.

As I said, I have been collaborating with Professor Günter Leugering and his team for many years. FAU was the most natural choice.

You are a specialist in partial differential equations, control theory, and the numerical analysis of control processes. What caused you to be interested in this field?

I was trained as an undergraduate student at the University of the Basque Country (UPV/EHU). Mathematical and Numerical Analysis have always been strong areas at our University. Then, during my PhD at Université Pierre et Marie Curie in Paris I got intensively trained and involved in the numerical and control theoretical aspects of Partial Differential Equations too. These areas play a key role in most engineering and scientific applications.

We just finished our Advanced Grant of the European Research Council “NUMERIWAVES” devoted to the numerical aspects of wave propagation phenomena. Our current interests cover a variety of novel topics including the robust control of parameter dependent problems. Indeed, in practical applications the various sources of uncertainty mean that the classical paradigm, where the models are completely determined, is not realistic.

What do you think are the main differences between your home university in Madrid and FAU?

FAU is organised in Chairs, with well-structured teams. Typically, Departments in Spain are rather the union of individuals.

What, in your opinion, are particular strengths of FAU in an international context?

The region is well structured and organised, friendly, with good infrastructure, efficient. In particular, FAU is the perfect place to develop an academic career. I particularly appreciate the will of the University to reinforce its role of a leading international player, focusing special attention and care on individuals.

How would you describe Bavaria and Germany in just a few words?

It’s a place where, as foreigners, my family and I were received warmly, where we found peace and optimal conditions to live and work.

Do not hesitate. Join!

Is there anything that a visiting researcher should definitely remember to bring for their stay?

If possible, bring a bike. Otherwise, get one when you arrive.

I enjoyed the variety of restaurants in the evenings in the old quarter of Erlangen, the warm, calm, and rewarding atmosphere, and the quality of the food.

Do you have a particular highlight, an experience or a moment during your stay that you’ll remember for a long time?

The Humboldt annual meeting in Bamberg was memorable. My family and I will never forget that unique atmosphere combining friendliness with high scientific and academic standards.

Eskerrik asko, thank you. It will be an honour to contribute to the growth of FAU in my role of Ambassador.

From 2008 to 2012 Zuazua was the Founding Scientific Director of the BCAM – Basque Center for Applied Mathematics, in Bilbao, created by the Basque Government, with the aim of promoting interdisciplinary research in mathematics – with a focus on computational, applied and multi-disciplinary aspects of mathematics. At BCAM, during the period 2008-2015, he was the leader of the research line “Partial Differential Equations, Control and Numerics”, as a Distinguished Research Professor of Ikerbasque, the Basque Foundation for Science. Zuazua also holds an honorary doctorate from Université de Lorraine, France.