Understanding how the universe works is a goal in itself

Australian Dr. Clancy James has been part of the research team working on the ANTARES and KM3NeT projects at the Erlangen Centre for Astroparticle Physics (ECAP) since 2011. He is head of the ANTARES publications committee and will lead the working group for simulations in the follow-up experiment KM3NeT. Alongside his research work, Clancy James is a supervisor for doctoral candidates and students at ECAP.

The international research groups at ECAP aim to find cosmic particles – high-energy neutrinos. Neutrinos, which very rarely react with other elementary particles, can easily cover large cosmic distances and therefore deliver information about the most energy-rich and remote phenomena in the universe. Huge detectors, such as the ANTARES underwater telescope off the south coast of France, are required for the experiments. The astroparticle physicists at FAU are involved in the operation of the detectors and in the evaluation of the data, and develop new software packages and methods of analysis. ECAP video (German)

Understanding how the universe works is a goal in itself

Dr. James, what was it that got you interested in the universe?

My original interest in space and astronomy came from books about black holes, quasars and other exciting things that my mother bought me when I was about six years old. Since then I have never lost my fascination for the universe and I wanted to be an astrophysicist from the first time I heard the word.

Could you give us a short description of the project that your research group ANTARES is working on at the FAU research centre ECAP?

The aim of ANTARES is to detect neutrinos which are produced in high-energy processes in the universe, such as stellar explosions with their remnants, radiation from supermassive black holes or the destruction of dark matter. The experiment itself is done with an underwater telescope 2.5 kilometres under the sea off the coast of Toulon in France. At this depth it is possible to detect light which is produced in the water when neutrinos interact with it.

And what is your role in the research group?

I work on computer simulations of the experiment, more specifically on a programme which simulates the production, diffusion and detection of light which is produced by relativistic particles in sea water. We are currently investigating how sensitively the next-generation instrument KM3NeT will react to particle showers produced by high-energy neutrino interaction.

What benefits can society in general expect as a result of your research?

The official answer is that it will lead to new technological developments and numerous spin-off technologies in the field of physics which will enrich society in areas such as the internet, GPS or wireless technologies. However, I don’t like these ‘practical’ justifications – understanding how the universe works, from the smallest to the largest scale, is a goal in itself. It’s like fine art.

A painting from Cezanne’s series The Card Players was sold at auction for around 250–300 million dollars. KM3NeT, the next-generation instrument for ANTARES which is currently being built, will costs around 160-220 million dollars. And the film Transformers: Age of Extinction cost around 200 million dollars. None of these things will cure cancer, stop war or end hunger – but I would still say that humanity benefits much more from the first two examples than from the last one.

What has been the most important result of your work at FAU so far?

The most important result of my work so far doesn’t sound very exciting: I’ve improved the quality of the simulations of the ANTARES experiment, particularly the propagation and detection of light. Although it isn’t visible to people on the outside, it’s extremely important in order to understand how the instruments behave. This work will enable the experiments to achieve more precise results in the future.

How do you find the interaction between researchers at FAU?

I work at the Erlangen Centre for Astroparticle Physics (ECAP) which was set up to bring different research groups from the field of astrophysics together. This is quite useful as you can simply go down the corridor and find out about the latest findings on topics such as supernova remnants or active galaxies which are being analysed in other experiments here.

How well known is FAU on an international level in your field of research, astroparticle physics?

For many researchers, universities are largely seen as collections of research groups that are allocated to faculties and departments for mainly bureaucratic reasons. The Erlangen Centre for Astroparticle Physics is definitely very well known in the field of astroparticle physics. I was already familiar with ECAP in connection with ANTARES and other experiments years before I heard of FAU and Erlangen.

What would you says to students or young researchers who are considering whether they should choose FAU for a stay abroad?

I would advise them to check first whether the suggested research group or subject has a strong international presence. Although I most certainly believe that ECAP is a good place to research it may not be the case for other departments.

My first and lasting impression was how typically German the region is – from the numerous little villages, hills and woods to someone who apologises for being just three minutes late for a meeting. Erlangen itself is a nice city. There is nothing particularly remarkable about it but Erlangen is simply a very comfortable place to live.

Do you already have a particular highlight, an experience or a moment during your stay so far, that you’ll remember for a long time?

The fact that I got married in a castle in the hilly landscape in the north of Erlangen (which, I admit, would still be the highlight even if I’d got married on a rubbish dump). Then there was a game of Australian rules football in the middle of winter – quite a unique experience. Or the fact that I saw my first wild hedgehog here!

What is your favourite place at FAU?

Dr. James, thank you for giving us an insight into your work at FAU and your life in Erlangen. 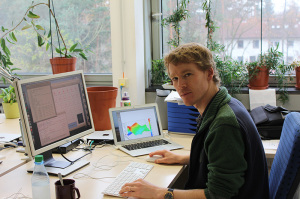 From 2009 to 2011, Clancy James worked as a researcher at Radboud University Nijmegen in the Netherlands, initially as an NWO scholarship holder for his project ‘Using LOFAR and the Lunar Cherenkov Technique for the Detection of the Highest Energy Cosmic Rays and Neutrinos’ and later as a postdoctoral researcher involved in the Cosmic Rays Key Science Project (CR KSP). He completed his PhD in theoretical and experimental physics at the University of Adelaide, Australia, in 2009.

His PhD thesis ‘Ultra High Energy Particle Detection with the Lunar Cherenkov Technique’, for which he observed the moon with radio telescopes, received multiple awards, including the Bragg Gold Medal for the best PhD thesis in physics in Australia in 2009.