GCT is the first Cherenkov telescope to use main and secondary mirrors. This style of construction is advantageous for earth-bound gamma-ray telescopes as it enables high image quality and a large field of view, while also allowing the telescope and light sensors (‘cameras’) to be more compact than when conventional mirror systems are used. GCT is equipped with the prototype Compact High Energy Camera (CHEC) developed by the group led by FAU astrophysicist Prof. Dr. Stefan Funk, with the initial work being done at Stanford University and SLAC National Accelerator Laboratory and the subsequent development being carried out at FAU’s Erlangen Center for Astroparticle Physics (ECAP) together with partner institutes such as the Max Planck Institute for Nuclear Physics. At FAU, Professor Funk’s team is developing the electronics of the camera that are responsible for reading the data. 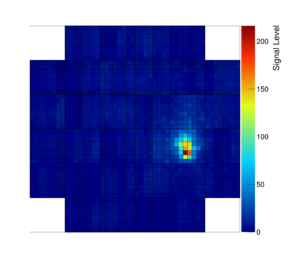 Cameras for Cherenkov telescopes have to be extremely fast and highly sensitive so that they can capture the extremely short, weak flashes of light against the background of normal star light. Their exposure time is just a few nanoseconds, i.e. millionths of a second. During the first tests with the CHEC, the team pointed the telescope at a dark area of the sky, far away from the moon and the light from the nearby city, and turned the camera on. Surprisingly, the camera was triggered and ‘photographed’ a short flash of light against the background, which should have been too light for it to work. The images turned out to be of particle showers in the atmosphere caused by cosmic radiation – exactly what CTA has been designed to observe in the future.

The Cherenkov Telescope Array, which will probably be set up in Chile and Spain, is a next-generation instrument in high energy gamma-ray astronomy that will be ten times more powerful than instruments such as HESS. CTA will have over 100 telescopes with three different mirror sizes: approximately 4 metres, 14 metres and 23 metres in diameter. GCT is one of the ‘small’ telescopes for CTA that will cover the highest energy range of 1 to 300 tera electronvolts. Around 70 small telescopes, half of which will be GCT types, will be set up over an area of up to 10 square kilometres. A consortium of Australian, French, German, Japanese, Dutch and British institutes is responsible for the Gamma-ray Cherenkov Telescope. Another two small telescope models are also being tested by the international CTA consortium.

More photographs from the GCT inauguration are available on Flickr.