With the new Interdisziplinäres Zentrum für Nanostrukturierte Filme (IZNF) at the Cluster of Excellence ‘Engineering of Advanced Materials’ (EAM), which is due for completion by the end of 2018, FAU will expand on its established expertise in the areas of new materials and processes, and optics and photonic technologies with a new interdisciplinary centre for nanostructured films.

Today research is at its best when it is interdisciplinary. 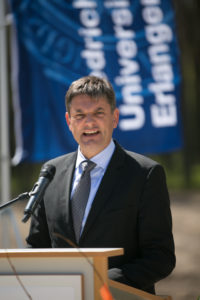 President Prof. Dr. Joachim Hornegger is delighted that FAU’s strengths have been recognised through the funding for IZNF. (Image: FAU/Erich Malter)

In his welcoming speech FAU President Prof. Dr. Joachim Hornegger emphasised the strengths of the research projects that will be conducted at the new centre by 11 working groups from the fields of surface functionalisation and thin film technology, saying, ‘Today research is at its best when it is interdisciplinary. IZNF will benefit from being located in close proximity to the relevant disciplines of the seven FAU departments involved it its work, as well as other relevant partner institutions such as the Fraunhofer Institute IISB, the Max Planck Institute for the Science of Light, the Bavarian Centre for Applied Energy Research (ZAE) and the new Helmholtz Institute Erlangen-Nürnberg (HI-ERN).’ He said that he was delighted that the German Council of Science and Humanities, the Joint Science Conference (GWK), and the Bavarian and federal governments had recognised these unique qualities by providing the funding for the new research centre.

The only centre of its kind in the world

‘This centre will be the only one of its kind in the world and will provide a fantastic research environment for FAU’s researchers from the fields of surface functionalisation and thin film technology by bringing the projects focused on this highly innovative area together in one place,’ IZNF speaker Prof. Dr. Christoph Brabec explained. He also described how a rigorous closed process chain, from the manufacturing and characterisation to the integration of the films into functional materials and components, would be established at the research centre. 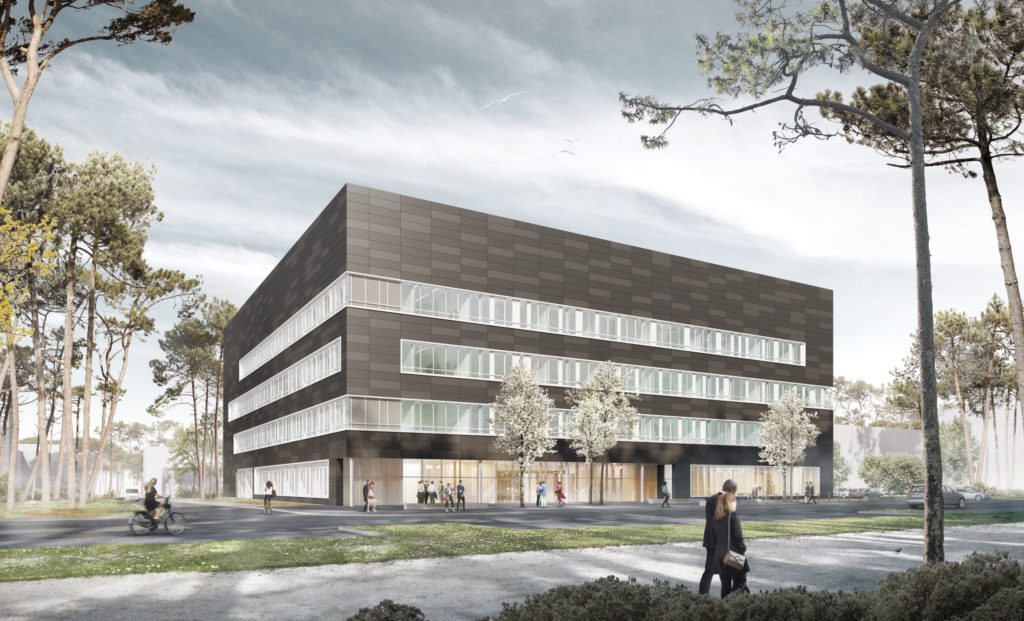 Over 250 people will work at the research building on FAU’s Southern Campus, which will cover 4638 square metres. Researchers at IZNF will conduct basic research in the sciences and engineering which will be used in the manufacturing of functional thin films and investigate how these films can be integrated into functional thin film systems. Thin films are layers of material with a thickness of between a few nanometres and several micrometres whose physical properties – such as conductivity or reactivity – are often different to those of the same material in bulk form. Everyday examples of thin films can be seen in the rainbow colours of soap bubbles and films of oil on top of water.

Many technologies are rely on thin films

Thin films can also be used to create properties that do not exist otherwise. Many modern technologies that are of particular relevance in Germany – such as sustainable methods of energy transformation and storage, methods for improving the efficiency of materials use, communication and information technologies, and sensor technology – rely on the use of thin film technologies. These applications are based on key research in photonics and optical electronics, nanotechnology and catalysis.

Applications with a high market relevance

Examples of applications with a high market relevance include functional coating systems used in transistors, membranes, electrodes and printable solar cells, systems for photoelectrochemical water splitting, optical sensors in communication technology and new friction systems, as well as reactive and biocompatible surfaces. The functionality of all of these technologies results from the use of thin and nanostructured films. The quality of a film is crucial for its function.

Developing process technologies for thin films made from liquids

The researchers at IZNF will develop suitable process technologies for thin films made from liquids that will enable nanostructured films to be manufactured efficiently, making them available for use in technical applications. IZNF is being established as part of the Cluster of Excellence ‘Engineering of Advanced Materials’ (EAM) and will make use of the particle systems created and previous work done at EAM’s Interdisciplinary Centre for Functional Particle Systems in order to address new questions in the highly innovative area of nanostructured films.