FAU has an excellent international reputation. This is reflected in the large number of renowned international researchers who choose FAU as their host university in order to work with FAU researchers as part of a scholarship or research award from the Alexander von Humboldt Foundation.

More than two million people in Europe suffer from inflammatory bowel diseases and approximately 170,000 new cases are diagnosed each year. These chronic diseases not only significantly reduce patients’ quality of life, but can also lead to cancer. Dr. Jay V. Patankar, Humboldt scholarship recipient at the Chair of Internal Medicine I, is part of Prof. Dr. Christoph Becker’s research group where he is working to identify mechanisms which alleviate bowel inflammation.

Dr. Jay V. Patankar completed his Bachelor’s degree in microbiology at the University of Pune in India and his Master’s degree in molecular and human genetics at Banaras Hindu University in India. He then earned his doctorate in molecular medicine at the Medical University of Graz, where he subsequently conducted postdoctoral research. He was also a postdoctoral fellow at the University of British Columbia from 2013 to 2016. He arrived at FAU as a Humboldt scholarship holder in September and will remain for two years. 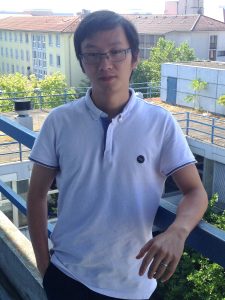 Dr. Tao Wei conducts research on carbon materials, particularly fullerenes, which are hollow, closed molecules with high symmetry, similar to the structure of a football. Wei focuses in particular on new giant fullerenes which contain additional atoms or ions in their interior. His research concentrates on how these fullerenes are created, how they are structured, what characteristics they display and whether they are suitable for photovoltaic applications.

At Prof. Dr. Andreas Hirsch’s Chair of Organic Chemistry II, Tao Wei will spend the next two years studying the structure of two-dimensional hybrid materials made of fullerenes and graphene. Their electronic characteristics will be a particular focus of his research.

Dr. Tao Wei earned his doctorate at the Department of Materials Science at the University of Science and Technology of China. He has been a Humboldt scholarship recipient at the Chair of Organic Chemistry II since July 2016.