Drawing on mankind’s earliest spirit of adventure, nine teams of FAU researchers and international peers will forge new ideas together on the sailing ship ‘Thor Heyerdahl’ in the summer of 2017. Recognised as a centre of excellence for innovation and international research, FAU has designed the ‘Science Sets Sail’ initiative around its major research topics. Through moderated discussions, presentations, on-board life and teamwork, FAU’s goal is to grow together with research partners by sharing new experiences, while strengthening interdisciplinary research on themes that are critical to our world today. Meanwhile, ‘Open Ship Days’ at the five ports of call will broaden the initiative’s audience and appeal.

FAU created Science Sets Sail as an innovative way to establish new forms of cooperation with academics in Estonia, Finland, Latvia, Poland, Sweden and further afield – not to mention attract potential students and researchers to come to Germany. In doing so, the University intends to encourage international individuals with high potential to participate in FAU’s cutting-edge research projects.

“I am really excited about the new scientific horizons that Science Sets Sail will enable us to cross, and so to change the world,” says Prof. Dr. Joachim Hornegger, President of FAU. “I believe that the Science Sets Sail trip will support us in building strong and committed teams of international researchers around the important Scandinavian and Baltic region, enabling both FAU and guest academic institutions to push the boundaries of interdisciplinary research.” 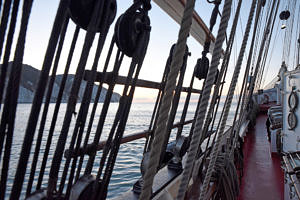 The three-masted topsail schooner sailing ship is named after the Norwegian researcher and explorer famous for leading the ‘Kon-Tiki’ expedition in 1947. Thor Heyerdahl showed that it was possible for ancient Polynesians to travel large distances using only materials and technologies available at that time. Following this inspiration, FAU research teams – matched by peers from the Baltic region and beyond – will participate from nine FAU entities during three consecutive legs of the voyage: 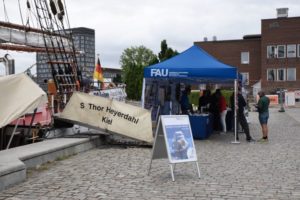 At each scheduled port, the Science Sets Sail teams look forward to sharing some of their experience locally via a mobile science fair referred to as Open Ship Days. These and other events at the ports of call will broaden the initiative’s audience and appeal by inviting the participation of local municipalities and chambers of commerce, higher education institutions, researchers at different stages of their career, highly talented students and members of the general public.

The accompanying Science Sets Sail website shares information and stories from the ship and ports of call, including a growing list of events, and a ship’s log book which will be updated in the run up to and during the voyage. For more information, please see: www.science-sets-sail.fau.eu 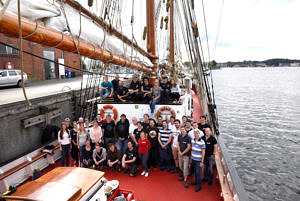 After being welcomed aboard on Saturday evening by Friedrich-Alexander-Universität Erlangen-Nürnberg (FAU) President, Professor Joachim Hornegger, the new teams were – quite literally – shown the ropes!

With over 40,000 students, about 650 professorships and 14,000 employees, Friedrich-Alexander-Universität Erlangen-Nürnberg (FAU), founded in 1743, is one of the largest universities in Germany. In addition to the Cluster of Excellence ‘Engineering of Advanced Materials’ (EAM) and the Graduate School of Advanced Optical Technologies (SAOT), which was founded as part of the Excellence Initiative, FAU currently has more than 30 co-ordinated programmes with DFG funding.

The University of Erlangen-Nürnberg offers around 260 degree programmes, among them 7 Bavarian Elite Master’s degree programmes and around 50 programmes with a distinct international focus. No other German university offers such a broad and interdisciplinary range of subjects on all qualification levels. FAU students enjoy global mobility through over 500 partnerships with higher education institutions in more than 70 countries.