Mass extinction with prior warning

Mass extinction with prior warning

Scientists from FAU have proved that warning signs for mass extinction do exist, contrary to previous assumptions.

Mass extinctions throughout the history of the Earth have been well documented. Scientists believe that they occurred during a short period of time in geological terms. In a new study, FAU palaeobiologists and their research partners have now shown that signs that the largest mass extinction event in the Earth’s history was approaching became apparent much earlier than previously believed, and point out that the same indicators can be observed today. 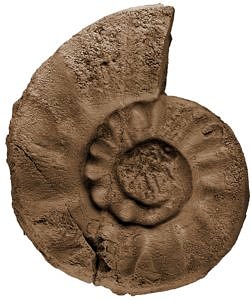 FAU scientists discovered that there were signs that the Permian-Tirassic mass extinction event was approaching a long time before it actually happened. Several species of ammonoids such as Paratirolites were lost and others became steadily smaller over a period of 700,000 years (shown here: Paratirolites). (Image: Dieter Korn)

Mass extinctions are rare events that have catastrophic consequences. These events often completely change the course of evolution. For example, the rise of mammals – and therefore of humans – would probably not have been possible had dinosaurs not become extinct 65 million years ago. A meteorite hit the Earth plunging it into darkness and causing a huge drop in temperature. The subsequent hunger crisis wiped out more than 70 percent of all animal species. Man’s ancestors were among the lucky survivors.

The consequences of the extinction of species that occurred around 250 million years ago at the Permian-Triassic boundary were even more catastrophic. Gigantic volcanic eruptions and the greenhouse gas emissions they caused wiped out around 90 percent of all animal species according to estimates. For over twenty years, the dominant opinion in research was that this ‘mother of all disasters’ happened abruptly and without warning, when seen on a geological time-scale – estimates suggest a period of just 60,000 years.

In a new study published in the March edition of the renowned magazine ‘Geology’, a team of researchers from Germany and Iran have proved that this crisis happened over a longer period of time. Under the leadership of Prof. Dr. Wolfgang Kießling, Chair for Palaeoenvironmental Research at FAU, who has also recently been appointed as lead author for the sixth World Climate Report, and Dr. Dieter Korn from the Museum für Naturkunde in Berlin, the scientists examined fossils in largely unresearched geological profiles in Iran . Their results show that the first indicators of a mass extinction were evident as early as 700,000 years prior to the actual event. Several species of ammonoids were killed off at that time and the surviving species became increasingly smaller in size and less complex the closer the main event became.

The warning signs of mass extinction are also visible today.

The factors that led to a mass extinction at the end of the Permian Period remind us very much of today, says Prof. Wolfgang Kießling. ‘There is much evidence of severe global warming, ocean acidification and a lack of oxygen. What separates us from the events of the past is the extent of these phenomena. For example, today’s increase in temperature is significantly lower than 250 million years ago’.

However, the warning signs that Wolfgang Kießling’s team found towards the end of the Permian Period can already be seen today. ‘The increased rate of extinction in all habitats we are currently observing is attributable to the direct influence of humans, such as destruction of habitat, over-fishing and pollution. However, the dwarfing of animal species in the oceans in particular can be quite clearly attributed to climate change. We should take these signs very seriously.’

The work was carried out by the TERSANE research unit, which is based at FAU (FOR 2332). In this interdisciplinary project, eight working groups investigated under which conditions natural greenhouse gas emissions can reach catastrophic levels and how they are connected to crises in biodiversity.