The extinction of the dinosaurs was not the first clear indication that changes in the environment and the climate have considerable effects on the biosphere. Smaller organisms, for example belemnites, similar to the squid of today, reacted to climate change in a somewhat less spectacular manner – namely by decreasing in size. Investigating the interactions which led to the so-called Liliput effect is a complex task, requiring innovative approaches. In a pilot study, palaeobiologists from the GeoZentrum Nordbayern at Friedrich-Alexander-Universität Erlangen-Nürnberg (FAU) have now succeeded in revolutionising methods for determining the size of cephalopods using computer tomography and measuring their internal length, proving for the first time that they did decrease in size. The team of researchers have published their findings in the journal ‘Fossil Record’. 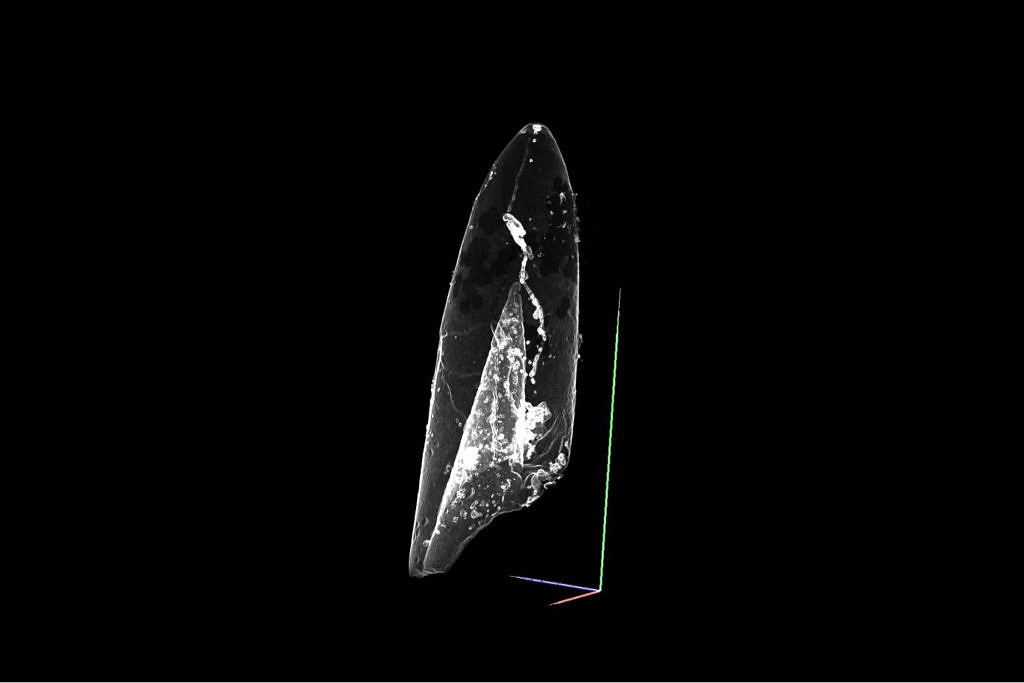 Crises in the history of Earth such as climate change and a lack of oxygen are often linked to extinction events, but they also have other repercussions, such as a decrease in the size of living organisms. So far, belemnites have rarely been investigated in this context. Belemnites are celaphopods which were widespread 182 million years ago in the Mesozoic Era and were commonly preyed on by marine reptiles. FAU scientists Dr. Kenneth De Baets and Patricia Rita as well as the Bachelor’s student Martina Schlott investigated the size of belemnites in two Toarcian accumulations, referred to as battlefields.

For the study, at least 70 belemnites were gathered from the sites near Buttenheim and Forth in South Germany, before being measured and the results analysed and compared to track any changes happening as time progressed. The results allowed the team of scientists to prove for the first time that the cone-shaped, cylindrical skeleton of the belemnites, also referred to as the rostrum, decreased in size between the Early Toarcium 182 million years ago and the Middle Toarcium 178 million yeas ago. Possible causes are increasing temperatures and a decrease in oxygen levels in the sea, but these hypotheses still have to be examined in more detail.

The scientists took a new approach for measuring their samples, using a CT scanner at the GeoZentrum combined with an innovative measuring method. ‘My staff painstakingly measured one belemnite after another in the CT scanner and created reconstructions of them using special software,’ explains Dr. De Baets. Whereas previous studies have focussed on measuring the width and height and maximum diameter of the belemnites, this time the team decided to use the internal length as an accurate indication of their size. This goes from the initial chamber or siphon to the apex. According to project leader Dr. De Baets, the benefits of the new method are that ‘using computer tomography, it is possible to measure the volume of the rostra without destroying the fossil, and an archive of 3D images can be built up over time.’

The researchers now want to extend their investigations, conducted within the scope of the DFG research group ‘Temperature-related stresses as a unifying principle in ancient extinctions’, to cover other time periods and locations. The next step involves measuring more than 1,000 belemnites from various sites within Europe and fitting the results together like tiles in a mosaic to give an overall picture. Work is also being done on achieving a higher resolution of the computer tomographic measurements in order to allow further, more detailed results to be obtained. The study is intended to contribute to a better understanding of global climate change by investigating the history of life.