During his surgical procedures with the da Vinci robot, Prof. Dr. Robert Grützmann, director of the Department of Surgery, likes to take his shoes off as this increases the ‘feel’ of the foot pedals that are used to control the speed of the robot’s movements. The surgeon operates the instruments mounted on three of the robot’s arms using two joysticks. The fourth arm moves the camera and light. All four arms are inserted in the patient’s abdomen via four small incisions. Whilst the operator observes all his movements within the body via a high-resolution screen, the da Vinci robot precisely performs each one of his commands only a few metres away. A gripper positions the fatty tissue so that the scissors can carefully cut it away in order to expose the tumour. 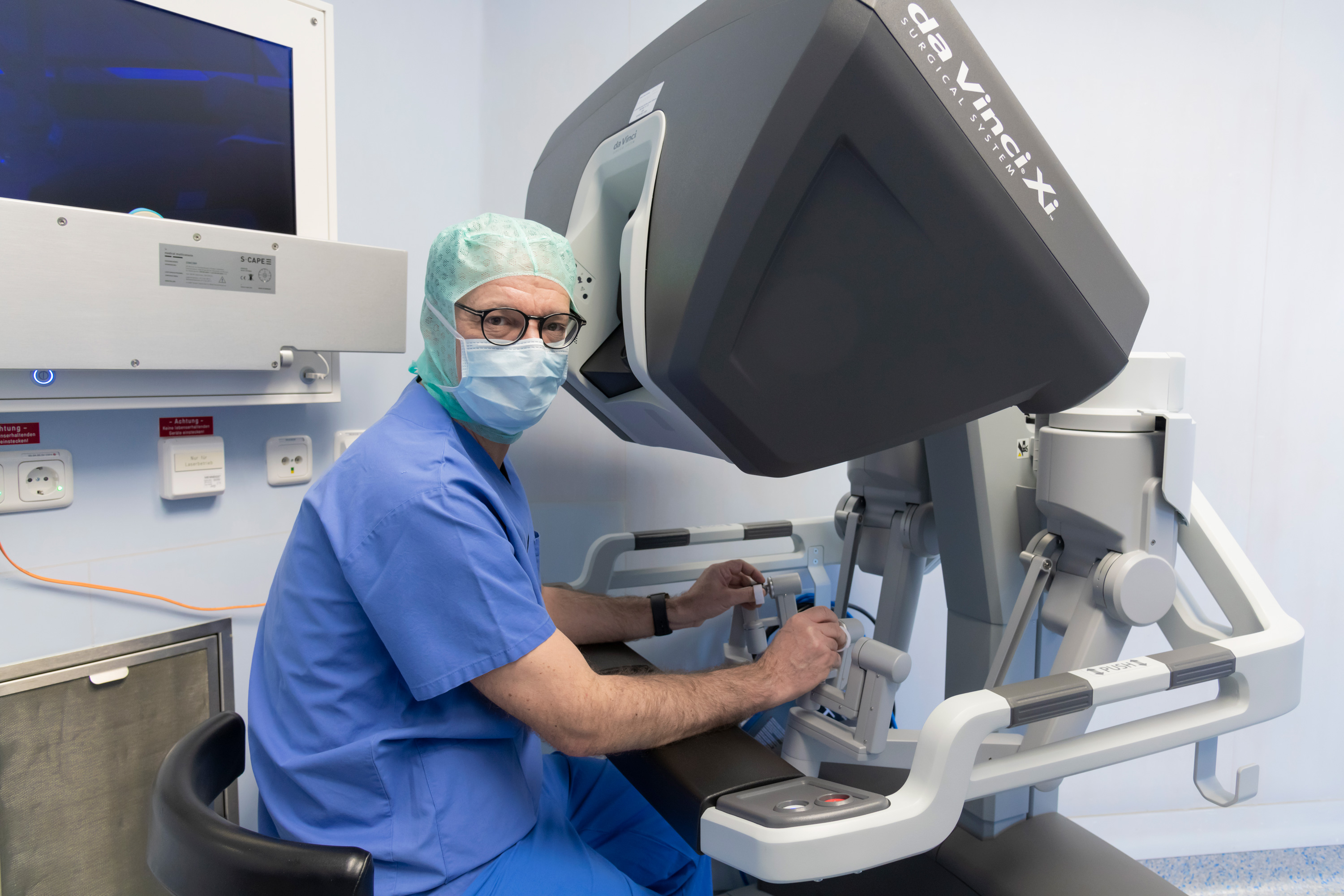 Prof. Dr. Robert Grützmann can control the four arms of the surgical robot via the console without a time delay. (Image: Uni-Klinikum Erlangen/Michael Rabenstein)

‘The da Vinci Xi has a much more streamlined design than its predecessor, which means we can operate much more quickly and flexibly’, says Prof. Grützmann. The optimised camera of the da Vinci Xi not only provides the surgeon with a high-resolution three dimensional image with up to twelve times magnification, but also a fully-illuminated operating site inside the patient. ‘This means even the smallest details and nerve cords are also clearly visible and not just in two-dimensional images. We can now see everything at the correct spatial relationship and by using special image filters, we can make the circulation of blood in tissue more clearly visible’, enthuses senior consultant Dr. Christian Krautz, who also regularly performs surgery with the da Vinci system at the Department of Surgery. Dr. Krautz emphasises the decisive improvement made to the new da Vinci system compared with the previous model. Patients can now be moved onto a moving operating table without having to interrupt the procedure. The da Vinci robot automatically adjusts to the movements of the operating table and continues to carry out the commands it receives from the surgeon precisely and smoothly in real time.

Fewer incisions and less stress for the surgeon

Patients experience a noticeable benefit of this modern operating technique as it means fewer and smaller incisions have to be made than in conventional minimally-invasive surgery. For surgeons, operations carried out at the console are more ergonomic and less tiring, which reduces the physical strain on the body, especially during operations that last several hours.

Although medical insurance companies have until now only covered the costs for considerably cheaper open surgery when the da Vinci system was used, patients do not need to pay an additional fee to benefit from surgery with the system. The additional financial outlay for an operation using the da Vinci system, which is considerably higher than with a conventional operation, is covered by Universitätsklinikum Erlangen.

Currently, the da Vinci robotic surgical system is being used twice a day in operations in the Department of Surgery and in the Department of Urology and Paediatric Urology (director: Prof. Dr. Bernd Wullich) at Universitätsklinikum Erlangen. ‘The major advantage of the new da Vinci Xi is the fact that we can perform surgery in the smallest of spaces with almost unlimited freedom of movement in the patient’s body as the instruments exceed the natural range of motion of the human hand’, explain Prof. Wullich and Dr. Hendrik Apel, who have been performing numerous prostate surgeries and organ-preserving renal tumour surgery as well as operations on the renal pelvis in congenital ureteropelvic junction stenosis and bladder surgery with the system. Universitätsklinikum Erlangen is continuously expanding the range of applications it offers for robot-assisted surgery. Currently, surgeons at the hospital are using the da Vinci technology mostly for urological tumours and intestinal tumours, but also for special procedures on the stomach, liver and pancreas. Furthermore, they use the da Vinci system for selected gynaecological procedures as well as for complex head and neck surgery.