Transparent bones and the smell of cinnamon

Transparent bones and the smell of cinnamon

In contrast to what was previously suspected, our bones have a network of thousands of veins and blood vessels. This discovery was made by biologists and medical researchers at FAU and Duisburg-Essen University.

As Dr. Anika Grüneboom examined the microscope images of a lower leg bone of a mouse, she noticed that it had hundreds of pores. Did this observation confirm her suspicions? The biologist was hoping to discover how white blood cells, which play a central role in our immune system, can move from bone marrow outside to the periosteum and thus end up in the blood stream. Up to now, scientists have assumed that long bones have a closed bloodstream, albeit with very few arterial and venous canals, which are insufficient for transporting immune cells quickly. ‘We suspected that this established schematic for blood vessels is outdated, especially when you consider that not only immune cells, but also fresh blood cells are produced in bone marrow’, says Grüneboom. ‘However, we couldn’t prove this with an X-ray microscope, as this method allows us only to produce images of solid bones. We were able to see channels and pores in the bones, but we weren’t able to tell if they were supplied with blood.’

At the time, Anika Grüneboom was working as a doctoral candidate at the University of Duisburg-Essen. As part of a DFG project, the working group led by Prof. Dr. Matthias Gunzer in Essen was researching into new ways of treating inflammatory immune reactions in the human body in conjunction with the Department of Medicine 3 – Rheumatology and Immunology at Universitätsklinikum Erlangen. ‘Fundamental understanding of the signalling and transport pathways of our immune system is required in order to develop effective treatments against such infections’, explains Anika Grüneboom. ‘Our bones play a decisive role in this respect.’

So what about those pores? As the X-ray microscope couldn’t help them any further, the researchers needed to look for a new imaging method. So-called light-sheet fluorescence microscopy, where a thin section of the sample is illuminated, seemed to be the most promising method. However, it is not possible to examine an entire bone using this method unless it is transparent. Anika Grüneboom and her colleagues therefore had to find a way to make bones transparent. ‘We knew that we could make the cell structures of tissue samples transparent and thus visible under the microscope by using chemical compounds’, she explains. ‘However, for the corticalis (the hard outer layer of the bone), we needed a special sample treatment procedure that was not available at the time.’ The researchers found the solution in the form of a liquid that is usually used as a flavouring for cakes and biscuits at Christmas: ethyl cinnamate. 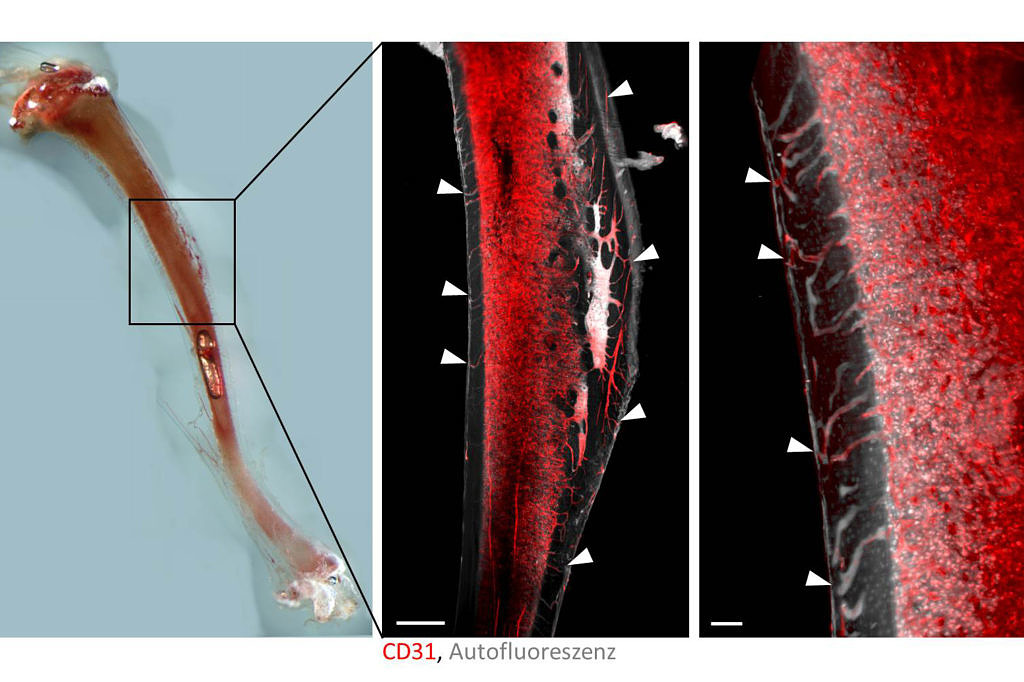 A network of blood vessels in the bones

The result was not only surprising, it was sensational. The researchers discovered that the prepared lower leg bone had hundreds of capillaries along its entire length that connected the bone marrow directly with the external periosteum. Investigations of the blood flow of a living organism later on showed that most of the arterial and venous blood flows through these capillaries and not through the small number of larger blood vessels that have been known to science for a long time. The researchers named these tiny channels ‘trans-cortical vessels’ or TCV because they penetrate the corticalis, the compact outer layer of bones. ‘The trans-cortical vessels have the important task of supplying bones with oxygen and nutrients’, Grüneboom adds. ‘In addition, the immune cells produced in the bone marrow are quickly transferred to the bloodstream via this network of blood vessels – in the same way as an underground train system that is able to successfully transport large numbers of passengers quickly and directly through barriers.’

Light-sheet examinations of bone fragments and images taken of living bones with a new type of magnetic resonance imaging have now confirmed that humans also have these transcortical vessels. This discovery could be fundamental to the understanding of immune reactions and bone growth processes. Researchers led by Prof. Dr. Georg Schett at the Department of Medicine 3, where Anika Grüneboom has also been working since 2017, have already demonstrated that patients suffering from osteoporosis have fewer blood vessels in the corticalis than those who do not have the disease. Patients with arthritis, on the other hand, have an increased number of transcortical vessels. Researchers at FAU also hope to answer the question as towhether the weakening of the immune system often associated with ageing is connected with the number of blood vessels in bones. To do so, Anika Grüneboom hopes to refine conventional imaging methods in her own working group and, in conjunction with immunologists and computer scientists at FAU and physicists at the Helmholtz Zentrum in Berlin, hopes to develop a new microscope that will allow the blood flow in bones of living people to be examined.

Click on the image to open the pdf file.

This text was first published in our magazine alexander. In Issue 110, we are taking a look at 100 years of the School of Business, Economics, and Society, looking through bones and images of the self and others. In addition, we’re discussing funding and support for teaching, oil ‘magnets’ and life-threatening superstitions.