Computer programmes for the eye in the sky

Computer programmes for the eye in the sky

When a Proton M rocket is launched from Baikonur Cosmodrome in Russia in July 2019 to transport the eROSITA X-ray telescope on board the SRG satellite into space, a piece of FAU know-how will be flying with it. Astronomers at the Dr. Karl Remeis Observatory at Friedrich-Alexander-Universität Erlangen-Nürnberg (FAU) have contributed to the development of the telescope with special software for mathematical models. The team led by Prof. Dr. Jörn Wilms, Professor for Astronomy and Astrophysics, will also be responsible for an important part of the analysis of the measurement data that will be collected by eROSITA during the seven-year mission.

The search for dark energy

Under the leadership of the Max Planck Institute for Extraterrestrial Physics (MPE), several research institutes including FAU have come together to develop the X-ray telescope in order to shed some light on the secrets of dark energy. With its seven identical mirror modules, the telescope will precisely scan the sky in the medium X-ray range and chart around 100,000 galactic clusters in order to find out more about the development of this mysterious dark energy that is driving the Universe apart at an increasing rate. In addition, the researchers are hoping to gain insights into millions of active galactic nuclei that contain black holes and to observe binary stars and the remains of stellar explosions. eROSITA will not orbit Earth, but at a distance of around 1.5 million kilometres from Earth in one of the Lagrangian points. The advantage is that the telescope will retain its orientation in relation to the Sun and Earth.

Astronomers at FAU are responsible for the initial checks and monitoring of the satellite data of eROSITA, which includes near real time analysis. A control room has been set up at the Dr. Karl Remeis observatory for this purpose. Any unusual measurement values are immediately checked and compared with existing data. ‘If this data is from a previously unknown source or if a known object is behaving unexpectedly, because, for example, it’s one hundred times brighter than expected, we can send a message to our international partners,’ explains Wilms. ‘They can then investigate with telescopes such as the Hubble Space Telescope or the Chandra X-ray Observatory’. 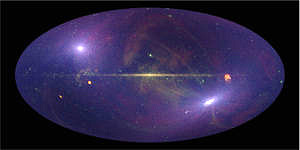 In preparation for this mission, astronomers at FAU have supplied special software for this international project. The design of the computer programme enables it to be easily adapted to any space mission. Depending on the aim of the mission, the programme can model what the mission will observe. This enables the performance of instruments such as the eROSITA X-ray telescope to be optimised. During missions, these simulations serve as checks to enable comparisons to be made between the observations and what the researchers expect. ‘If a value deviates from what we expected, we have to check whether something is damaged,’ explains Wilms. This software means that the FAU researchers are very much in demand. They are also participating in the ATHENA mission launched by the European Space Agency (ESA).

In addition to MPE and FAU, the Institute for Astronomy and Astrophysics at Tübingen University, the Leibniz Institute for Astrophysics Potsdam (AIP), the observatory of Hamburg University and the Russian space agency Roscosmos and the German Aerospace Center (DLR) are all participating in the eROSITA project as well as the University Observatory at Ludwig-Maximilians-Universität München (LMU) and the Argelander-Institut für Astronomie, Universität Bonn. The Russian partner institute is the IKI Space Research Institute in Moscow and NPO Lavochkin based in Khimky near Moscow is responsible for the technical aspects of the entire SRG mission.