An interview with the women’s representative at FAU Prof. Dr. Annette Keilhauer

There has been a women’s representative at FAU for 30 years now. In our interview, the current postholder, Prof. Dr. Annette Keilhauer, outlines some of the challenges faced by her predecessors, what they have achieved and what still remains to be done.

Professor Keilhauer, what are the duties of the women’s representatives?

Why was the office established?

The women’s rights movement in the 1970s increased awareness of the extremely low proportion of women in academia. In 1985, the Federal Republic of Germany ratified the UN Women’s Rights Convention and thereby paved the way for having the office of women’s representative required by law. When Prof. Dr. Renate Wittern-Sterzel was appointed the first University Women’s Representative at FAU in 1989, only 13 of the 442 professors at the University were women. The proportion of women among academic staff was also very low. One of the first important tasks for women’s representatives at that time was to demand and analyse a statistical overview of gender distribution over the various pay grades and qualification levels in order to shine a light on the problems.

They almost certainly met with resistance. In what respect?

Those with a conservative resistance to change saw no need for such an office – it is not a coincidence that Bavaria was fairly slow to make having a women’s representative a legal requirement for universities. At first, women’s representatives often encountered a lack of understanding, if not even hostility, and were treated with scorn or ridicule. Not everyone was pleased that they were not only included in important decision-making bodies, but soon even received voting rights in these committees.

Do you still face resistance today?

Nowadays, people at all levels accept that it is important to take as objective an approach as possible when taking decisions regarding personnel. What people still underestimate, however, are that subconscious gender stereotypes may play a role in personnel decisions if we do not make a conscious effort to face up to them. It is still the case today particularly, but not exclusively, in science and technology subjects that a supposedly objective assessment of achievements is based on quantitative criteria for achievements which mask the risk of taking a one-sided approach. 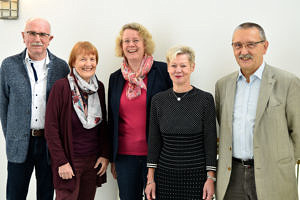 A lot has been achieved already. What achievements can you report back on?

People in university committees are now more aware of the need to consider gender equality. Greater consideration is also paid to having both genders represented more evenly when appointing committee members. The fact that gender equality is now taken seriously at executive level as well is reflected in the fact that the University Women’s Representative has been appointed an advisory member of the Executive Board. One of the main concerns for the first women’s representatives was to develop a family-friendly university, and today the well-established Family Service is an integral part of FAU. The effectiveness of measures aimed at increasing the proportion of women in higher qualification levels is underlined by the increasing numbers of women taking a doctoral degree in most subjects, as well as in the numbers of women completing a habilitation.

What still needs to be done?

We cannot be satisfied with a proportion of women among professors of just 19.4 percent. This casts a poor light on FAU in comparison to other universities in Germany and Europe. The proportion of women professors is particularly low in scientific and engineering subjects, but medicine is not much better. At the same time, young researchers should be offered better career prospects and opportunities for personal development, for example within the context of tenure track procedures and more stable positions for academic staff with longer-term contracts. Finally, academia is still characterised by hierarchies and extreme dependency, making the area of sexual harassment and anti-discrimination particularly important.

What would you like to pass on to young women researchers?

Enter academia and research with confidence, make the most of any advice and support services you are offered and do not only work at perfecting your excellence in your subject, but also take a proactive approach to make a name for yourself in your field. You should not underestimate the importance of actively establishing and nurturing subject-related networks from an early stage, both at a national and an international level. This is crucial for acceptance in today’s scientific community.

Chronic of 30 years of women’s representatives at FAU

Published for the anniversary: Chronic of 30 years of women’s representatives at FAU. Available to download online free of charge.

Chronic of 30 years of women’s representatives at FAU

This article first appeared in the FAU magazine “alexander”. You can also download the alexander as PDF. You can also have the magazine sent to your home or workplace free of charge. Please fill out our subscription form.

You can also read selected articles online in our blog “FAU news”.