It all started with joint pain and a red facial rash: the then 16-year-old Thu-Thao V had already undergone several medical examinations in three cities when she was diagnosed with systemic lupus erythematosus (SLE) in February 2017 at Universitätsklinikum Erlangen. In the life-threatening autoimmune disease, which mainly affects young women, the immune system attacks its own cells in various organ systems.

After different immunosuppressive therapies failed to improve her symptoms, Thu-Thao V was treated with CAR-T cells by researchers from the German Centre for Immunotherapy (DZI) at Universitätsklinikum Erlangen in March 2021. Almost six months after the cell therapy, her joint pain has now disappeared and the 20-year-old has fully recovered. ‘I can even do normal sports again,’ says Thu-Thao V.

The findings were published in the New England Journal of Medicine.

The immune system usually distinguishes between foreign and endogenous cells, tolerating the body’s cells and attacking foreign cells to protect the organism, for example, from viruses and bacteria. ‘In SLE, parts of the immune system go crazy and form antibodies against their own genetic material, which inevitably leads to severe inflammatory reactions in the organs,’ explains Prof. Dr. med. univ. Georg Schett, Director of the Department of Medicine 3 – Rheumatology and Immunology, Universitätsklinikum Erlangen.

During the worst phase of the disease, student Thu-Thao V had to take almost 20 tablets every day so that her body could compensate for the stress of her misguided immune system. ‘The joint pain was also accompanied by water retention due to my renal insufficiency, strong palpitations and hair loss. After an acute episode, the symptoms were particularly severe,’ says Thu-Thao V.

Everything else had failed

‘We were standing with our backs to the wall,’ says Prof. Dr. Gerhard Krönke, senior physician at the department. All therapies aimed at suppressing the patient’s malfunctioning immune system failed. Even at this point, giving up was not an option for the treatment team and researchers decided to bring CAR-T cells into play.

‘CAR stands for chimeric antigen receptor which is an artificial receptor,’ explains Prof. Dr. Andreas Mackensen, Director of the Department of Medicine 5 – Haematology and Oncology. ‘Immune cells, or T cells, from the patient are genetically engineered in the laboratory to add the CAR. The CAR recognises special antigens on the surface of the target cells and destroys them. Cell therapy with CAR-T cells is already being successfully used to treat leukaemia and lymphoma.’

In the case of the young SLE patient, the CAR-T cells were programmed to render harmless the B cells that form antibodies against the body’s own cells.

Rapid improvement thanks to CAR-T cells 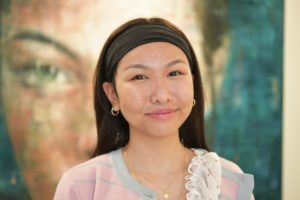 In March 2021, Thu-Thao V was the world’s first patient treated with SLE CAR-T cells. ‘We were very surprised how quickly her condition improved immediately after the cell infusion,’ reports Prof. Dr. Dimitrios Mougiakakos, senior physician at the Department of Medicine 5. ‘The CAR-T cells have done their job excellently and quickly rendered the B cells causing the disease harmless. All the symptoms of SLE disappeared along with the antibodies that were attacking the body.’

Thu-Thao V was able to discontinue all immunosuppressive drugs including cortisone. She has now been completely free of symptoms for almost six months, so far there are no signs of a recurrence of the disease.

‘I can finally breathe properly and sleep through the night, and I no longer have any water retention, and the redness in my face has disappeared. My hair is also growing much more densely,’ says Thu-Thao V. Her heart function is also back to normal: her heart rate has dropped from an average of 115 to 130 beats per minute to 80 beats per minute.

Lupus erythematosus is a rare chronic inflammatory autoimmune disease that mainly affects young women of childbearing age. The disease is found throughout the world but it is also rare. It occurs in about 50 out of 100,000 people. Two main forms are distinguished: cutaneous lupus erythematosus (CLE) and systemic lupus erythematosus (SLE). CLE only affects the skin with typical butterfly-shaped skin changes in body parts exposed to the sun, especially around the eyes. SLE also affects internal organs (e.g. kidney inflammation, joint pain, inflammation of the lungs and heart). In some cases, lupus can be fatal. The causes of the disease have not yet been fully identified. Experts assume a genetic predisposition in combination with UV light and hormonal influences.

The German Centre for Immunotherapy offers a hotline for affected people.