Waste not, want not

Waste not, want not

How can we deal with the waste problem on earth?

We separate our waste for recycling, choose returnable bottles over single-use bottles and avoid plastic packaging wherever we can. Even though a lot of people have started to think differently and change their habits, we are still producing far too much waste and not recycling enough, with drastic consequences for people and the environment. According to the German Environment Agency (Umweltbundesamt), the population of Germany produced 230 kilograms of packaging waste per head in 2018, with plastics accounting for approximately 40 kilograms. Plastic waste is exported, often to countries with virtually non-existent environmental standards, under the premise that it will be recycled and re-used. Instead, tons of it ends up in the oceans of the world. Until now, more than 8.3 billion tonnes of plastic has been produced, the majority of which has never and will never be recycled. Prognoses forecast that by the year 2050, there will be an accumulated volume of twelve billion tonnes of plastic waste in the environment.

Life after the use by date

At the Chair of Pharmaceutical Chemistry at FAU, scientists collect old medicines in order to use their active ingredients for research purposes. You can read more about this in this friedrich article.

The problem has long since become a global issue, attracting the attention not only of politicians but also of researchers. Scientists are looking for ways to sustainably dispose of or use waste in future. ‘We have been concentrating on clean water, which is stipulated as a human right in a UN resolution from 2010, but is still not a reality in many places across the globe,’ explains Prof. Dr. Marcus Halik from the Department of Materials Science and Engineering. Together with his team, Halik has spent the last years at FAU investigating how smart rust can be used to remove plastic from water. The researchers have developed new materials and a concept based on them that allow highly problematic water contaminants to be caught magnetically using special nanoparticles. The specially designed nanoparticles bind to pollutants that can then be gathered up using magnets. ‘The materials are reasonably priced, non-toxic, recyclable, can be produced in large quantities and can be used to remove pollutants at all relevant scales, from a major oil spill to the smallest contamination with glyphosate,’ explains Halik.

The smart rust has been scientifically proven to help remove nano and microplastics, liquid hydrocarbons such as benzene or oil, pesticides and toxic chlorine compounds from rivers, lakes and oceans. ‘We are currently working on transferring the concept to contaminants such as hormones or medicine residues, as well as PFAs,’ Halik continues. PFAs, short for perfluoroalkyl and polyfluoroalkyl substances, are a large group of chemical compounds that are commonly used in lubricants and impregnating agents. The potential of Halik’s research projects is underlined by the fact that they have received funding from both the German Research Foundation (DFG) and the German Federal Environmental Foundation (Deutsche Bundesstiftung Umwelt).

Another approach being pursued to tackle the major challenge of excess waste is known as ‘waste to energy’, in other words generating environmentally friendly energy from waste. Generating energy from waste is the standard procedure today in waste incineration and biogas plants. As a result, waste in Germany and other countries with advanced refuse disposal systems is taking on a major role in providing electricity, heating and process energy. The European Waste Framework Directive lists energy recovery at number four in its waste hierarchy, after prevention, preparing for re-use and recycling. Waste is largely incinerated. Especially in the case of regenerative raw materials from biomass, however, this should be the very last option. Increasing use is being made of the concept of cascading, in which biomass is recycled for as long and as often as possible Energy can be recovered using non-thermal technologies, particularly in decentralised processes.

Waste can also be valuable

Prof. Katharina Herkendell carries out research into bioelectrocatalysis at the Chair of Energy Process Engineering. This involves using enzyme-based catalysts and microbial catalysts in electrochemical cells to convert waste into energy in a low-emission process. In other words, biological materials are used as catalysts in electrochemical processes. ‘In biofuel cells, for example, we can obtain green electricity from the oxidation of organic compounds found in regular household waste, biofluids or sewage. This process is often referred to as waste to energy,’ she explains. Another bioelectrochemical approach is known as ‘power to X’, in which surplus renewable energy from solar or wind power is pumped into an electrosynthesis plant in which electrons can be used to upgrade residual energy from carbon dioxide. Depending on the chosen biocatalysis systems, reusable materials such as biomethane, biomethanol or other e-fuels can be synthesised. The main objective in all instances is to make the maximum use of energy sources in material cycles. Herkendell stresses that ideally, these should be closed-loop cycles that contribute to a circular bio-economy, as ‘our waste is still valuable.’ Research into recycling using enzymatic systems is still very much in the early stages.

Until now, enzymatic biofuel cells have predominantly been used for a number of different applications in the field of medical engineering. When it comes to using waste to generate energy, microbial systems in biogas plants and sewage works are considered the more practical and established solution, and electrochemical elements have already been successfully implemented in pilot studies. ‘Generally speaking, this is still a very new area of research, there is a lack of systems that are scalable and secure over the long term, and very few studies have investigated the technological and economic aspects of this field. So far, we cannot make any general assumptions about the profitability of these energy systems. Seen from a long-term perspective, however, the combined systems of renewable catalyst materials and green energy have decisive advantages in decentralised energy process engineering,’ Herkendell explains.

At the Institute of Bioprocess Engineering, enzymes are also being used to break down waste, or more specifically, plastics such as polyethylene terephthalate (PET). Most people associate plastic bottles with PET. However, even tiny particles of PET are problematic and a threat to the environment. Deposits of macro and microplastics are dangerous not only in water but in nature as a whole. Most plastics are extremely durable and cannot be decomposed in a definable timeframe. ‘In order to combat plastic waste in nature and save resources instead of using them to produce new plastic materials, we must recycle more or, ideally, find a way to make plastics fully degradable,’ explains Stefanie Fritzsche, research associate at the Department of Chemical and Biological Engineering (CBI). Enzymes found in various microorganisms are in principle capable of splitting polymers like PET. The natural function of these enzymes is to attack the waxy protective layer of certain plants. ‘Up until now, however, we have been faced with the dilemma that the reaction speeds of natural enzymes are comparatively low when it comes to tackling synthetic materials such as PET, meaning that either degradation takes a very long time, the materials cannot be fully degraded or extremely large quantities of enzymes are required, rendering the processes uneconomical on a large industrial scale. Our research therefore focuses on using protein engineering to improve the activity and stability of these enzymes,’ Stefanie Fritzsche explains.

As part of the ‘IDcycLIB’ project funded by the Federal Ministry of Education and Research, a research team from the Professorship of Inorganic Chemistry is investigating how to improve the recycling of batteries. Markers made of magnetic nano components enable the constituent parts of batteries to be separated according to type.

In protein engineering, the enzymes’ DNA is altered specifically in order to optimise the desired properties and ensure that large quantities of plastics can be broken down in as short a period as possible. This is of groundbreaking importance for waste management. A French company has already demonstrated that this recycling strategy is suitable for use on a large industrial scale. ‘At the Institute of Bioprocess Engineering, our interdisciplinary approach and our fully equipped molecular biological laboratory means that we can combine fundamental research into protein engineering on a molecular biological basis with practical implementation in biotechnological applications,’ says Fritzsche, whose first research project phase was funded by the Alfred-Kärcher-Förderstiftung.

A will to change

Can science ever fully conquer the problem posed by waste in spite of such generous, targeted funding? Professor Halik believes, ‘Our method could certainly help, in particular by reducing further pollution by removing contaminants from water. It goes without saying that no technical method will be able to remove all micro and macroplastics or other pollutants from the entire 1.4 billion cubic kilometres of water on our planet. However, our magnetic water cleansing procedure would be able to minimise the quantity of new pollutants, that are predominantly released into rivers.’ Marcus Halik is of the opinion that a paradigm shift is needed if we are to tackle the global problem successfully. ‘Just using the word ‘waste’ already implies our resignation towards failure, as the fact is that there is actually no such thing as waste. All consumed goods are converted natural resources and are valuable raw materials, just in a different form – even CO2. It seems to me that the only way we can really live sustainably is by changing our habits and aiming for a resource-neutral economy with closed-loop material cycles and energy-efficient processes.’

Herkendell believes consumers have an obligation to vote responsibly. ‘A lot of people are starting to realise that we are going to have to make some inconvenient changes to our consumer habits if they are to be sustainable. Awareness of the topic is definitely on the rise. Wherever possible, we must invest in research that offers economically attractive and long-term alternatives to today’s waste production and recycling options.

Stefanie Fritzsche is pleased that so many research groups have now started to tackle the problem from several different angles. ‘Whilst some aim to avoid the production of waste by designing new materials or processes, other research groups like ours are trying to find efficient ways to break down waste that has already been produced. Although the problem of waste seems insurmountable at the moment, I think that the problem can be curbed in future by a shift in people’s behaviour and, in particular, by scientific advances.’

Susanne Stemmler holds a doctorate in law and was an editor at the Nürnberger Zeitung (law/politics) for many years. She now works as a freelance journalist. 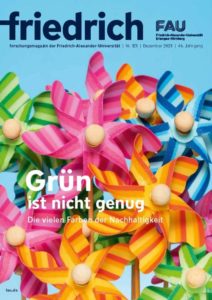