Off to the racetrack

Off to the racetrack

The Octanes gear themselves up for Formula Student

Sunday at 5 am: While the sun has only just started rising, a group of students are already loading their cars with tools, cables, oil, brake fluid and everything else you need to test racing cars. They are the Octanes and have just built a new racing car for the international Formula Student competition, as they do every year. From 17 July 2019 onwards, the teams will travel to racetracks for Formula Student in Hungary, Italy, Austria, and Germany to compete against students from other universities with their racing cars built from scratch.

There’s a lot to be done before that, though. ‘Like the fine tuning’, as team member Aaron von Werder explains. This involves tuning the engine, adjusting the chassis and improving the steering, for example. And if that wasn’t enough, this year they have twice as much work to do. In addition to their ‘my’, which is their twelfth racing car, the students have now also designed and built a driverless vehicle for the first time. 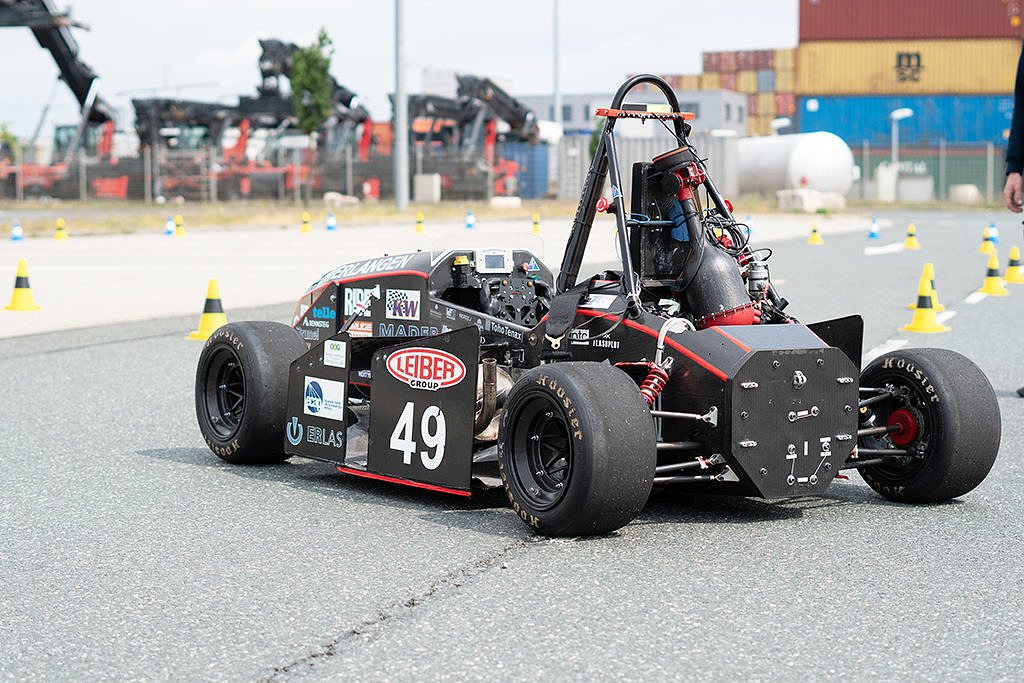 The Octanes are really proud of ‘athena’, their first driverless racing car, which they built by modifying their previous vehicle. (Image: Aaron von Werder)

To get an initial feel for their cars on the racetrack, the students must first run both vehicles in on the track. ‘This helps us find out exactly where the problems are’, says Bijan Yadegari, one of the three team members who will be driving the ‘my’ during this year’s competition. It’s not uncommon for problems to arise during these test runs, such as a coolant leak or a loose connection. The test runs then have to be suspended for repairs to be carried out. ‘Some days we don’t get to drive the car much at all’, says Yadegari. The test runs are essential, as the roadworthiness, performance and speed of the racing cars are all tested to the limit during Formula Student. To make sure they are well prepared, the students meet every weekend at their test site to reconstruct various disciplines from the competition and speed around the track on screeching tyres, for example around a course shaped like a figure of eight. This discipline is known as the ‘Skidpad’, where it’s all about how the cars handle the bends on the track. ‘The fast manoeuvres on the bends demonstrate which vehicle has the best chassis’, explains Bijan Yadegari. There are three other disciplines for the teams to face – ‘Autocross’, ‘Acceleration’, and ‘Endurance’. ‘This is all about acceleration and long-term stress tests for the car’, he explains. But that’s not all. The car’s design is also judged, as the experts ask the Formula Student teams about every last detail. How were the cars designed and built? Which materials have the students used? Which manufacturing methods have they used? Participants have to be well prepared for such detailed questions and justify their decisions, but this is a piece of cake for the Octanes as they have been working on the planning, design and completion of their vehicles for a year now.

But how exactly did they build their racing car? ‘Anyone who wants to get involved should really be interested in cars in general, of course’, says Andreas Bauer, who studies mechanical engineering. ‘Most of us are from the Faculty of Engineering’, he explains, ‘but students from all subjects are welcome’. Previous experience in motorsports is not necessary, but team members do need to be motivated. ‘Several team members join in their first or second semester and can’t really apply much knowledge from their degrees at that stage’, he says. The competition is about much more than just technical know-how, as the students have to source all the components and raw materials before they can even start building the car. And this costs money – both cars cost around 600,000 euros. ‘And that’s just the manufacturing costs’, emphasises Bauer. This is too much for the students to finance themselves. ‘We rely on sponsors to cover the majority of the costs’, he explains. This requires good business ideas, business and cost plans, as well as sophisticated marketing strategies. For inexperienced students, this is the perfect opportunity to get to grips with the financial side of the project before they try their hand at the technical side later on. 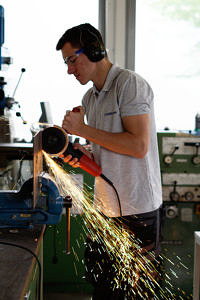 The students spend almost every spare minute of their time in the workshop where they put the finishing touches to their racing cars. (Image: Aaron von Werder)

After getting the tyres, carbon or other semi-finished products, the students go to the workshop to grind, hammer, mill, solder, bolt, weld and programme. ‘We have our own workshop, but we’re allowed to use the facilities at different departments, too’, reports Aaron von Werder. The students even built the chassis out of carbon and aluminium themselves.

A great deal of responsibility

The Octanes have built up their expertise themselves over the years. ‘For some of us, this year’s car is the fifth racing car we have worked on’, says Richard Stierstorfer. It’s a long time, during which a lot of knowledge has been acquired and passed on to new team members every year. ‘There are around 60 to 70 of us in all, and it’s sometimes a little bit chaotic’, says the student, smiling. How do you keep a large group like this organised? ‘We have a total of five sub-teams, for which one or two team leaders are responsible’, he explains. He leads the ‘Driverless’ sub-team with Karim Awad and has to keep track of what’s going on and make sure that everything is ready on time. They can spend up to 70 hours a week on the racing cars, which doesn’t leave much time for studying. ‘But it’s still worth it’, he emphasises. ‘We do argue sometimes, for example, if some of the car parts haven’t been put together carefully enough and that’s causing yet another problem’, says Karim Awad, with a laugh. All the better that the students also spend a weekend in a cabin once a year where they design and build catapults, slingshots or rockets so they can also have some fun together away from the hard work in the workshop.

The test track in pictures: