When eROSITA gets to work, it will have had a long journey. The X-ray telescope has already travelled a total of 1.5 million kilometres through space since its launch in July 2019 on board the SRG satellite.

Its destination is a point on an extended line running through the sun and Earth on which the gravity between the two celestial bodies is in balance. The SRG satellite will orbit this point, at the same time as orbiting the sun together with Earth. It will then start to slowly rotate on its own axis. One complete rotation every four hours, for a period of four years. eROSITA will scan the entire night sky once every six months. Researchers hope the telescope will allow them to investigate galaxy clusters, the largest groups of connected objects in the universe.

The SRG satellite will orbit the Lagrangian point 2, which is on a line with Earth and the sun. Here the gravitational forces are in balance. (Image: Roscosmos/DLR/SRG/Lavochkin)

These clusters of several thousand galaxies should help to explain the phenomenon of dark energy, a mysterious form of energy which counteracts gravity and contributes to the increasingly rapid expansion of the universe. Astronomers now hope to investigate 100,000 of these galaxy clusters.

A team led by FAU astronomer Prof. Dr. Jörn Wilms from the Erlangen Centre for Astroparticle Physics (ECAP) and the Dr. Karl Remeis Observatory Bamberg has been involved in developing an X-ray telescope for this purpose. Researchers from several German universities were involved in the project, coordinated by the Max Planck Institute for Extraterrestrial Physics (MPE) and the German Aerospace Centre (DLR). They hope that eROSITA will not only allow them to identify and count galaxy clusters, but also make it possible for them to actually see inside these cosmic objects. The gas found there is so hot that it radiates out in the medium X-ray range, thereby becoming visible for eROSITA.

This allows comparisons to be drawn between galaxies which are close and others which are further away. The further a galaxy cluster is from the observer, the older the light is which can be seen, thereby showing an earlier stage of development. This allows conclusions to be drawn on the strength of the dark energy and how it has changed over time as the universe has developed. The astronomers also hope to use eROSITA to investigate roughly two million black holes in active galactic nuclei. The working group led by FAU astronomer Prof. Dr. Manami Sasaki from the Dr. Karl Remeis Observatory aims to investigate the remains of stellar explosions in our Milky Way. 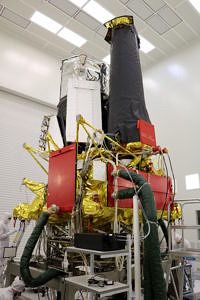 eROSITA was integrated into the SRG satellite in Moscow. From there, it was transported to Baikonur Cosmodrome. (Image: Roscosmos/DLR/SRG/Lavochkin)

Seven mirror modules which can capture even the smallest X-ray signals are required in order to receive images of the night sky with a better resolution than ever before. FAU expertise has contributed to the development and operation of the highly-specialised detector. Wilms and his team have designed software for mathematical models which can be used to optimise the performance of such measuring devices in advance and monitor them during operation. ‘Our highly-specialised expertise is the reason we were able to get involved in such major projects,’ explains Wilms. Normally, simulation programmes are developed especially for each particular mission. Wilms’ software has been designed in such a way, however, that it can be easily adapted for any space mission.

‘The model reproduces the entire measuring process,’ explains Wilms. ‘Our objective, however, is to refine the model until the simulated measurements it gives are the same as the data actually recorded by the device.’ Working towards this goal, researchers have been feeding the simulation programme with data from earlier missions and astronomical events which they know will definitely occur. ‘This basically allows us to predict what the device will record,’ says Wilms. If an actual measurement differs from the simulation, this falls to the attention of the FAU researchers, who can then check whether an error has occurred or whether the telescope has made a discovery. 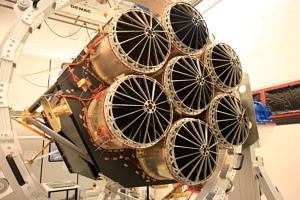 Another task for which FAU is responsible is the near real-time analysis for eROSITA. The X-ray telescope gathers data which are transmitted once a day to earth and decoded with software designed by FAU. These are then evaluated straight away at the observatory in Bamberg. ‘There are objects in the sky which have to looked at without delay,’ says Wilms.

‘As it is not possible to alter eROSITA’s observation routine, most data it collects are more likely to be interesting from the point of view of investigating the origins of the universe,’ he explains. ‘If, however, we record a source of light which is 100 times brighter than expected, then we may need to look into it in more detail without delay.’ In instances such as these, the FAU researchers will use their software to try and find out what it is by comparing the source with older images.

However, it is still worth taking another look without delay even if the source is known. ‘Our colleagues might discover something new,’ says Wilms. If so, scientists would then alert their colleagues throughout the world, and the NASA Hubble telescope could move to focus on this point. eROSITA will continue to turn stoically without interruption, and its X-ray eyes will only return to the same spot in another six months, by which time it may be too late.

Click on the image to open the pdf file

The current alexander focuses on the following topics: 50 year anniversary of the landing on the moon, the Internet – in danger? Article 17 of EU copyright reform, anniversary at FAU Language Centre and a new article from the series ‘Interesting places at FAU’, this time about the observatory.