Prof. Dr. Enrique Zuazua has held a Humboldt professorship at FAU since May 2019. At his Chair of Applied Analysis, the mathematician seeks to combine theory and practice and researches phenomena such as the world of waves.

A day without mathematics? That would mean getting up without an alarm clock, no phone calls, no satnav devices – even the date consists of numbers. Without us realising it, we are constantly surrounded by mathematics. It can make our day to day lives easier and also help us to better understand the world around us. This is not news to Prof. Dr. Enrique Zuazua, who has held an Alexander-von-Humboldt professorship at FAU since 2019: ‘If you watch a wave for a while, you can see that it has an identifiable shape which stays more or less constant whilst the wave moves. The wave in question may be an ocean wave, a nerve impulse, a shock wave or the blood flowing through our arteries. The world is a collection of moving shapes,’ explains Prof. Zuazua. ‘Humans have built an advanced technological society with the help of mathematics and science. Although they are not always noticeable at first glance, waves can be found throughout this world, providing a plethora of data. It is up to mathematics to develop tools for us to understand and come to terms with this new universe.’

The language of mathematics 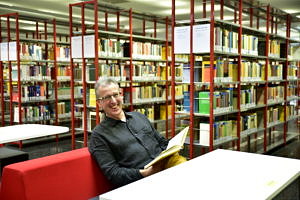 Collaboration with colleagues and the Executive Board of the University, who drive innovation at FAU, is an advantage for Prof. Dr. Enrique Zuazua, as is the city itself, where everything can be easily reached by bike. (Picture: FAU/Boris Mijat)

However, first of all the language of mathematics has to be learnt, just as someone learns German, Spanish or French. ‘Mathematics is like the moon, it has a light and a dark side. Without a certain level of understanding, all we can see are formulae – the dark side. As soon as you gain some knowledge, however, and start to learn the language of mathematics, you start to understand the underlying logic – light begins to shine through,’ says Prof. Zuazua. Prof. Zuazua himself focuses on applied mathematics. This connects mathematics done on paper to mathematics done using a computer. It is used to improve existing knowledge, such as the design of aeroplanes or trains. ‘I have always been interested in mathematics,’ says Prof. Zuazua. However, he does not only like mathematics, he also has a talent for it. ‘You tend to like things you are good at – and I have remained faithful to mathematics.’ In the meantime, he has become one of the leading figures in the area of applied mathematics, but his choice of career was not immediately clear from the outset.

In 1979, when he was 17 years old, he began to think about what to study. At that time, mathematics was seen as a marginal subject and did not have a particularly good reputation in Spain. The only job prospect was a maths teacher. By contrast, a certain prestige was enjoyed by subjects such as medicine, law or engineering. A relative advised him to take up engineering, as engineers also require a good knowledge of mathematics. Or would it be better to study business and economics, with its sociological components? ‘I grew up under Franco. He died when I was 14. My whole generation was very politically minded as a result – the smell of revolution was in the air,’ explains Zuazua. At the end of the day, it was his brother who convinced him to study mathematics by asking him what he liked best of all. His unhesitating reply was mathematics.

One of the main aims […] is to make a contribution to mathematics at the interface between nature and data sciences.

Using mathematics to improve the world

Research conducted by Prof. Zuazua at FAU is aimed at linking theory and practice. One of his focus areas is control theory. This area of research investigates the most diverse processes. The aim is to continually improve these processes in order to be able to model and simulate them better in future. This research is more valuable than ever before in view of climate change, particularly when it comes to predicting natural phenomena. However, researchers can also simulate electricity grids or even our social behaviour. ‘One of the main aims of our Chair is to make a contribution to mathematics at the interface between nature and data sciences. FAU with its innovative spirit and its wealth of experience in natural sciences, computer science and engineering provides the perfect location,’ says Prof. Zuazua.

For his research, all he and other mathematicians really need is a pen and paper, and possibly also a computer. However, FAU offers so much more – a positive environment and the opportunity to collaborate with colleagues and students who are thirsty for knowledge and who will at some point in the future become independent and continue to drive today’s research even further. Prof. Zuazua praises the Executive Board of the University, which promotes innovation at FAU, as well as the collaboration with the Alexander von Humboldt foundation. According to Prof. Zuazua, the city of Erlangen also has several advantages: it is a friendly and safe city, where everything can be reached by bike. In addition, a number of industrial companies are based in Erlangen, Nuremberg and the region, which represents a major advantage for research.

The only thing which he is finding hard to get used to is the German language. ‘I speak four languages fluently, but I have never learnt German. I wouldn’t necessarily have to, as everyone here speaks English, but I would like to and am taking German lessons.’ One thing is certain: Prof. Zuazua is fluent in the language of mathematics.

This article first appeared in the FAU magazine “alexander”. You can also download the alexander as PDF. You can also have the magazine sent to your home or workplace free of charge. Please fill out our subscription form.

You can also read selected articles online in our blog “FAU news“.