A series of successes: Seventh Humboldt Professorship for FAU

A series of successes: Seventh Humboldt Professorship for FAU

Another outstanding success for FAU – for the fourth time in a row and the seventh time overall, the FAU nomination for a Humboldt professorship has been accepted: Prof. Dr. Dr. Andrea Bréard has achieved the most prestigious international research prize in Germany and will receive 3.5 million euros from the Alexander von Humboldt Foundation.

Professor Bréard’s primary topic is the history of Chinese mathematics from the Late Imperial period until the 20th century. However, her work extends far beyond history of mathematics in China by connecting economic history with political history and social history to shed light on the development of the intellectual history of China. This is demonstrated in her research on the history of statistical methods in administrative and political contexts. Through this research, Professor Bréard was able to show how a modern state and system of statistics developed at the same time.

Professor Bréard has also demonstrated how the scientific culture of China is characterised by its own values that originate from the cultural history of the country and which do not appear at first glance to correspond to the standards of Western science. With work like this, Professor Bréard has not only contributed significantly to the field of mathematics, but also to Chinese studies and the history of science.

As a Humboldt Professor at FAU, Professor Bréard will also be appointed as the new director of the International Consortium for Research in the Humanities ‘Fate, Freedom and Prognostication. Strategies for Coping with the Future in East Asia and Europe. With her broad experience in mathematics, science history, Chinese studies and philosophy, Professor Bréard will bring new interdisciplinary perspectives into the history of science and strengthen prognostic research. 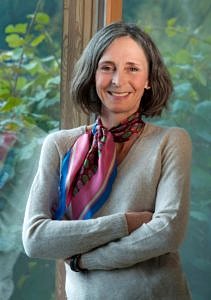 Prof. Dr. Dr. Andrea Bréard was born in Germany and originally studied mathematics and computer science before continuing her studies in the history of science in Shanghai. She completed a doctorate in communication and historical sciences in Berlin and a further doctorate in epistemology and the history of science in Paris. Following positions held at the Université de Lille and École Polytechnique in France, she has been an associate professor at Université Paris-Saclay in Paris since 2017. She was a visiting research scholar at the City University of New York and at the Max Planck Institute for the History of Science in Berlin Professor Bréard is a member of the editorial boards of the International Journal of Divination and Prognostication and the Revue d’Histoire des Mathématiques of the Société Mathématique de France.

The Alexander von Humboldt Foundation awards this professorship to internationally leading researchers from all disciplines who are currently working abroad. The aim of Alexander von Humboldt professorships is to enable German universities to bring top researchers to Germany and to offer them a long-term perspective for their work here. The professorships are funded by the Federal Ministry for Education and Research and are endowed with up to five million euros over five years. Further information about Humboldt Professorships is available on the website.