Excavations in the steppes

Excavations in the steppes

It is almost unthinkable for archaeologists to carry out research without expeditions, even in this digital age. Prof. Dr. Doris Mischka from the Institute for Prehistory and Protohistory at FAU is no exception, and spends several weeks in the field every year. She is not only accompanied by a team of researchers, but also takes a number of students with her each time. ‘Large-scale excavations simply would not be possible without their help,’ says Doris Mischka. ‘Not only that, it also gives young people the opportunity to put what they have learnt into practice and explore it in more depth.’

For more than five years now, the researchers have focused on Romania. In the area between the Carpathian Mountains and the Pruth river, a tributary of the Danube, they are investigating the settlement history of the pre-Cucuteni and Cucuteni cultures which spread from the mountainous country in the east to the grasslands or steppes in the west between 4800 and 3500 BC. 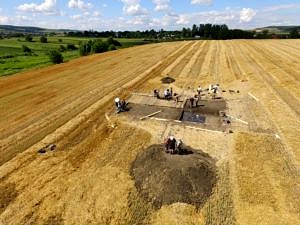 On site, Prof. Mischka and her team do not only rely on traditional investigative methods. They also have more modern methods in their toolkit, for example using a quadrocopter to survey the area. The drone provides scaled images that the researchers can use to create a digital terrain model with their specialist software. The model often shows up structures hidden in the ground such as buildings or burial grounds. This gives Doris Mischka and her team a better idea of where it might be worth their while investigating further. They then take geomagnetic measurements to investigate promising areas in more detail. To do so, they move a gradiometer over the site to record differences in the magnetic field of the ground. This allows the outline of individual buildings to become apparent, for example.

The researchers have already noticed one interesting feature during their expeditions: whilst early settlements in mountainous areas were still small, they became steadily larger as they spread westwards into the steppe. ‘So far, we have been able to show that there were 55 houses in Scânteia, our most important excavation site,’ Doris Mischka explains. ‘At a conservative estimate, we can therefore conclude that more than 300 people lived in the settlement.’

In spite of making the most of the digital technology available to them, Doris Mischka and her team still check their findings by meticulously exposing individual areas layer by layer. During their excavations, they discovered a large quantity of pottery shards, indicating that ceramic pots were used extensively in the settlement. In view of the sheer quantity of objects found, cleaning and archiving the finds is a mammoth task. To deal with the volume of work, the expedition is split into two teams. The ‘field team’ takes measurements and is involved in the excavation work. The ‘lab team’ cleans and catalogues all the finds. ‘Excavations are extremely hard work and strenuous for everyone involved,’ says Prof. Mischka. ‘But they are also great fun.’