The anniversary of the founding of the University 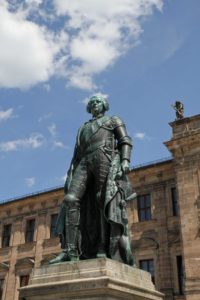 FAU’s landmark: The Margrave statue in front of the Schloss in Erlangen (image: FAU/Georg Pöhlein)

When Margrave Friedrich of Brandenburg-Bayreuth founded the Friedrichs-Universität in his principality on 4 November 1743, he probably never dreamt that 278 years later this university, now known as Friedrich-Alexander-Universität, would be one of the largest universities in Germany and renowned for its cutting-edge research. All the more reason for us to still celebrate the foundation of FAU today. Each year on 4 November the University officially celebrates with the Dies academicus.

In view of the current situation, the Dies academicus 2020 will be broadcast on Franken Fernsehen and streamed online at the same time.

Information on this year’s Dies academicus

The Dies academicus at FAU is attended by members, friends and supporters of the University as well as important public figures and gives the President the opportunity to look back over the most important events and developments of the past year and set out the University’s plans for the coming year in the ‘President’s report’. During the ceremony, various honours and prestigious awards of outstanding importance for the University are presented, for example the title of honorary senator, FAU ambassador or the prize for the promotion of equal opportunities and diversity.

As well as the official ceremony, the Dies academicus at FAU is also meant to provide members, friends and supporters of the University the opportunity to chat and spend an enjoyable evening together. It is a birthday party, after all. After the official ceremony, food and drink is served and the party begins.

A short history of FAU

The University in Erlangen was established in the spirit of enlightened absolutism. The function of German universities in the eighteenth century was to serve the needs of the many principalities by making provisions for the education and training of civil servants to enhance the reputation of the princes.

This was also the prime source of motivation for Margrave Friedrich of Brandenburg-Bayreuth who founded the Friedrichs-Universität in his principality in 1743 with the aid of Margravess Wilhelmine and the first chancellor of the University, Daniel de Superville.

It was the third university to be established in Franconia, after the universities of Altdorf and Würzburg, and was based in the imperial city of Erlangen in the former knight’s academy located on Hauptstraße. The official opening of the University took place on 4 November 1743, an event which is still commemorated every year at the dies academicus.

More on the history of FAU

Office of Knowledge and Technology Transfer and Continuing Education

Office of Knowledge and Technology Transfer and Continuing Education